Hydrogen planes may offer a possible solution to 'flight shame'. But can they safely provide greener air travel? As the world looks for new ways to combat climate change, hydrogen has emerged as a potential saviour for polluting industries like aviation. 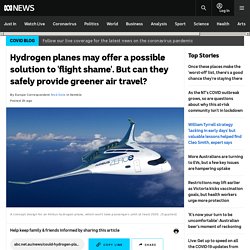 It's the most common element in the world, and packs more energy than conventional aviation jet fuel without the side effect of producing massive emissions of carbon dioxide. But hydrogen and air travel have a complicated history. More than 80 years ago the hydrogen-filled Hindenburg airship burst into flames when attempting to moor at Lakehurst in New Jersey. The extent to which the buoyant hydrogen gas can be blamed for the disaster has been the subject of much debate.

But the image of the airship crashing to the ground is something the aviation industry is hoping to leave behind as it re-embraces hydrogen. Senators push for more oversight after warning solar industry 'exposed' to China's Xinjiang human rights violations. A group of senators, human rights experts and lawyers are calling on the federal government to assure Australian consumers that the solar industry is not exposed to grave human rights abuses in China's Xinjiang province. 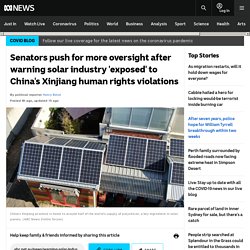 Key points: China has been accused of persecuting the Uyghur minority in the Xinjiang regionXinjiang produces a key ingredient needed to manufacture solar panelsA researcher says the solar industry's exposure to forced labour is clear The United Nations and countries including Australia have accused China of persecuting the Uyghur minority in the region, saying there is clear evidence of mass surveillance, extra-judicial detention, restriction on freedom of religion and forced labour. Government commits to expanding electric vehicle charging stations but no subsidies to increase uptake.

The Prime Minister says he will not do anything to force Australians into electric cars, as the government announces its new strategy for zero emissions vehicles. 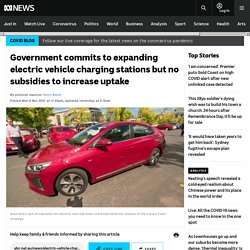 Instead, the federal government will partner with the private sector to fund 50,000 charging stations in Australian homes, in a bid to encourage more people to buy electric vehicles. Key points: The strategy does not include subsidies or tax incentives to increase uptake of EVsIncreased funding for charging infrastructure is expected to create 2,600 jobs over three yearsThe government says improved battery technology will be the key to lowering the cost of EVs The long-awaited Future Fuels strategy does not include subsidies, tax incentives, sales targets or minimum fuel emission standards that would make electric vehicles more affordable though, according to industry groups.

As Scott Morrison faces COP26, here's how Australia can solve its climate change mess. In Australia, we've spent the last 14 years watching our politicians knock each other off over it. 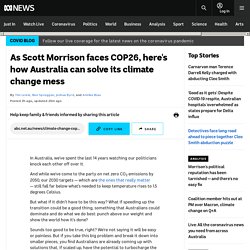 And while we've come to the party on net zero CO2 emissions by 2050, our 2030 targets — which are the ones that really matter — still fall far below what's needed to keep temperature rises to 1.5 degrees Celsius. But what if it didn’t have to be this way? What if speeding up the transition could be a good thing, something that Australians could dominate and do what we do best: punch above our weight and show the world how it's done? What is green hydrogen, how does green ammonia fit in, and could they pave Australia's way to a renewable future? Green hydrogen — it might sound like something out of a Superman comic but one of Australia's richest men is betting on the substance to make Australia a world leader in renewable energy while creating jobs in the process. 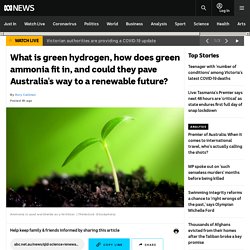 Billionaire mining magnate Andrew Forest this week announced a major investment in the gas, which includes establishing a Queensland factory to manufacture electrolyser equipment — the machines used to create hydrogen from water. He also revealed that his company Fortescue Future Industries would be conducting a feasibility study looking into making green ammonia from hydrogen at an existing ammonia production facility near Brisbane. The investments are aimed at producing a fuel source from green energy – in this case hydrogen of the green variety. Australia becoming a 'dumping ground' for polluting cars as government delays signing on to international standards. Australia is becoming a "dumping ground" for more dangerous and polluting cars, one transport minister warns, as the federal government has not adopted international emissions standards. 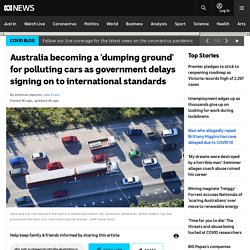 Key points: Australia has resisted signing on to vehicle emissions standards now commonplace around the worldAdvanced modern cars cannot accept the lower quality fuels Australia still usesExperts warn Australia will be supplied with less safe and less efficient cars if it does not change More than 80 per cent of the global car market now follows 'Euro 6' vehicle emission standards, including Europe, the United States, Japan, Korea, China, India and Mexico. India could run out of coal soon. So why is a country with such big reserves facing shortages? India is on the verge of mass power shortages, with the country's power plants running dangerously low on coal. 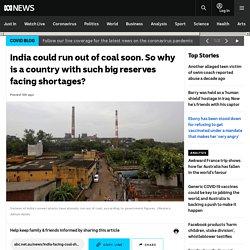 According to Reuters and The Financial Times, which cited government sources, more than half of India's coal plants will run out of energy by the end of the week. So, how has the world's second-most populous country reached this point? Here is a summary of the factors that have led to India's coal shortage. What are the current stock levels? As of September 29, 16 of India's 135 coal-fired power plants had zero coal stocks, according to the Central Electricity Authority (CEA). Why solar feed-in tariff cuts are driving a spike in household battery uptake. Australians with rooftop solar are growing increasingly frustrated as energy retailers slash financial incentives and some households are hitting back by dropping their reliance on these companies and installing batteries. 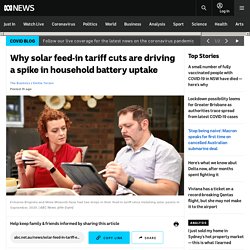 Key points: Energy retailers are dropping the subsidies they give solar households for excess powerEnergyAustralia is the latest to do this, with feed-in tariffs declining on October 1 in four statesSome of the company's solar customers are responding by installing household batteries Exclusive data given to the ABC shows how sensitive solar households are to reductions in feed-in tariffs and energy policy announcements. This sensitivity is being seen in real time right now, as one of Australia's biggest energy retailers cuts the reimbursement it gives solar households for the excess power they generate.

Ermanno Brignolo is an EnergyAustralia customer who was just notified of the retailer's latest tariff reduction. The world is hungry for solar panels. Why did we stop making them? Every day of the year, Australia installs about 1,000 rooftop solar systems; those black rectangles appearing on rooftops everywhere represent billions of dollars spent on silicon, glass and a little bit of metal. 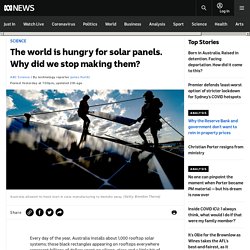 Given we have the highest uptake of solar in the world, you might expect that some of these panels would be made here. But with a few exceptions, that's never the case. Twenty years ago it was different: Australia appeared set to be a global player in the small but promising industry of manufacturing panels that could extract energy from the sun. And then everything changed. The world started wanting solar panels and Australia stopped making them. Now, with Australia relying more and more on solar to meet its energy needs, there are calls for that to change. 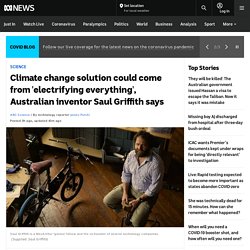 Key points: "Electrify everything" is the cheapest, fastest route to emissions cuts, experts sayHouseholds would replace petrol cars, gas heaters and other items with electric alternativesThese changes would be minimally disruptive, but provide large emission reductions. Wireless charging room powers your devices without plugs or cables.

Imagine boarding a train or ducking into a cafe where your mobile phone will automatically charge itself without plugs, leads or wires. Key points: An experiment at the University of Tokyo turned a whole room into a wireless chargerPhones, fans and lights were powered simultaneously without cablesThe electromagnetic exposure did not exceed human safety guidelines, initial studies showed Researchers from the University of Tokyo have built a room that is able to wirelessly and simultaneously power multiple devices, such as phones, fans and lights. Off-grid dream becomes reality as bushfire threat creates new era for power networks - ABC News. The Green Recovery: how Australia can ditch coal (without ditching jobs) – video.

Wind farm rejection leaves clean energy advocates baffled - ABC News. Denmark is the small WA town that's proven you can dream big when it comes to renewable energy - ABC News. Many Australians are working from home — here's why they might be doing it in darkness this summer - ABC News. IEA webstore. Rare night clouds may be warning sign of climate crisis. Something magical appeared at night over London and other parts of Britain on 21 June: ripples of electric blue clouds shimmered in the twilight sky after sunset. These were noctilucent clouds, the highest clouds in the world, more than 80km (50 miles) up on the edge of space, and looked like something from another planet. Noctilucent clouds form in the mesosphere, the rarefied upper atmosphere with little moisture and intensely low temperatures. The scant water vapour there can freeze on to specks of smoke from meteors burning up in the atmosphere, creating the crystals that form noctilucent clouds. The mesosphere is coldest in summer, allowing the crystals to form.

These clouds may also be a warning sign of the climate crisis. Much of the moisture needed to form the clouds comes from methane, a potent greenhouse gas that produces water vapour when it breaks down in the upper atmosphere. Crude Oil Prices - 70 Year Historical Chart. Why did US oil prices crash? And how will it affect me? Prices of benchmark United States crude turned negative on Monday, dropping as low as -$40.32 per barrel before settling in the negative thirties. And prices fell under pressure again on Tuesday. Why are oil prices crashing? World Energy Consumption Statistics. 06Apr Global renewable capacity rose by 176 GW in 2019 According to the IRENA, the global renewable capacity increased by 7.4% in 2019, when 176 GW of new projects were commissioned, raising the global renewable capacity to 2,537 GW.

Untitled. Untitled. Shell scenario sky. Untitled. Climate trillions frittered in the wind. For full Terms and Conditions please click here. Greens exposed as Bob Brown baulks at turbines in his backyard. Energy Outlook 2019. Hello everyone and welcome to the launch of the 2019 Energy Outlook. Why I changed my mind about nuclear power. Why renewables can’t save the planet.

MIT Races to Put Nuclear Fusion on the Grid to Fight Climate Change. Fusion energy—a long-held dream of clean and unlimited power—could be inching closer to reality following a collaboration from the Massachusetts Institute of Technology (MIT) and a startup company. MIT and Cambridge-based Commonwealth Fusion Systems will spearhead the multimillion-dollar effort, which aims to put fusion power " on the grid in 15 years," with an ultimate goal of rapidly commercializing fusion energy and establishing a new industry, the university announced. "This is an important historical moment: Advances in superconducting magnets have put fusion energy potentially within reach, offering the prospect of a safe, carbon-free energy future," said MIT president L.

Kinetic energy may power our home and gadgets starting in 5 years. In areas with no electricity, this power-generating soccer ball is providing the light. Model S Design Studio. Futuristic concept car that can split into two motorcycles is the solution to traffic - Lost At E Minor: For creative people. Solar Roadways - Introduction. China Vs. the West: The Renewables Arms Race. Untitled. The Future is Clear. Quantum Energy Reliable Hot Water Systems. » Can sound be converted to useful energy? Youtube. World's biggest sovereign wealth fund to ditch fossil fuels.

Oil2019Presentation. United States to lead global oil supply growth, while no peak in oil demand in si. Crunching the numbers: are we heading for an oil supply shock? Saudi Arabia may go broke before the US oil industry buckles. Heresy in Texas! The era of big oil is almost over. Key oil figures were distorted by US pressure, says whistleblower. Oil glut forecaster Maugeri admits duff maths. The global energy challenge: Awash with carbon.