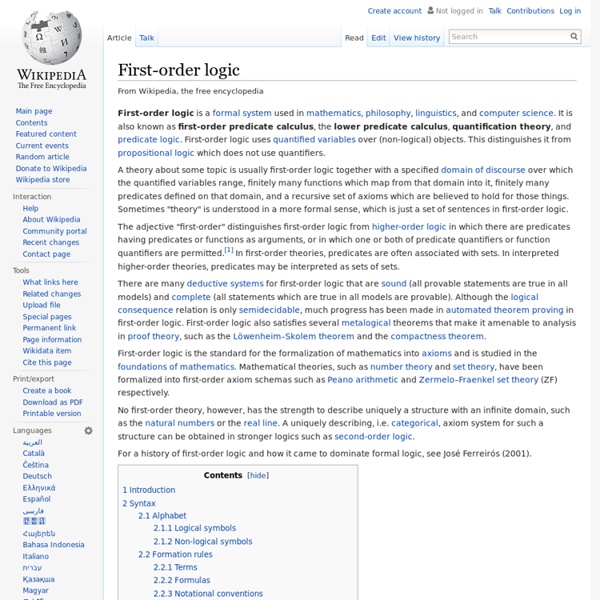 A theory about some topic is usually first-order logic together with a specified domain of discourse over which the quantified variables range, finitely many functions which map from that domain into it, finitely many predicates defined on that domain, and a recursive set of axioms which are believed to hold for those things. Sometimes "theory" is understood in a more formal sense, which is just a set of sentences in first-order logic. The adjective "first-order" distinguishes first-order logic from higher-order logic in which there are predicates having predicates or functions as arguments, or in which one or both of predicate quantifiers or function quantifiers are permitted.[1] In first-order theories, predicates are often associated with sets. In interpreted higher-order theories, predicates may be interpreted as sets of sets. First-order logic is the standard for the formalization of mathematics into axioms and is studied in the foundations of mathematics. Introduction[edit] . x in . Related:  The problems with philosophy

Quantification In logic, quantification is the binding of a variable ranging over a domain of discourse. The variable thereby becomes bound by an operator called a quantifier. Academic discussion of quantification refers more often to this meaning of the term than the preceding one. Natural language[edit] All known human languages make use of quantification (Wiese 2004). Every glass in my recent order was chipped.Some of the people standing across the river have white armbands.Most of the people I talked to didn't have a clue who the candidates were.A lot of people are smart. The words in italics are quantifiers. The study of quantification in natural languages is much more difficult than the corresponding problem for formal languages. Montague grammar gives a novel formal semantics of natural languages. Logic[edit] In language and logic, quantification is a construct that specifies the quantity of specimens in the domain of discourse that apply to (or satisfy) an open formula. Mathematics[edit] . means

Interpretation Interpretation may refer to: Culture[edit] Law[edit] Authentic interpretation, the official interpretation of a statute issued by the statute's legislatorFinancial Accounting Standards Board Interpretations, part of the United States Generally Accepted Accounting Principles (US GAAP)Interpretation Act, a stock short title used for legislation relating to interpretation of legislationJudicial interpretation, an interpretation of law by a judiciaryStatutory interpretation, determining the meaning of legislation Math and computing[edit] Media[edit] Neuroscience[edit] Philosophy[edit] Religion[edit] See also[edit] Domain of discourse The term universe of discourse generally refers to the collection of objects being discussed in a specific discourse. In model-theoretical semantics, a universe of discourse is the set of entities that a model is based on. The concept universe of discourse is generally attributed to Augustus De Morgan (1846) but the name was used for the first time in history by George Boole (1854) on page 42 of his Laws of Thought in a long and incisive passage well worth study. Boole's definition is quoted below. The concept, probably discovered independently by Boole in 1847, played a crucial role in his philosophy of logic especially in his stunning principle of wholistic reference. A database is a model of some aspect of the reality of an organisation. Boole’s 1854 Definition[edit] See also[edit] References[edit] Jump up ^ Corcoran, John.

Logical truth A logical truth is considered by some philosophers to be a statement which is true in all possible worlds. This is contrasted with facts (which may also be referred to as contingent claims or synthetic claims) which are true in this world, as it has historically unfolded, but which is not true in at least one possible world, as it might have unfolded. The proposition "If p and q, then p" and the proposition "All married people are married" are logical truths because they are true due to their inherent structure and not because of any facts of the world. Later, with the rise of formal logic a logical truth was considered to be a statement which is true under all possible interpretations. The existence of logical truths has been put forward by rationalist philosophers as an objection to empiricism because they hold that it is impossible to account for our knowledge of logical truths on empiricist grounds. Logical truths and analytic truths[edit] Truth values and tautologies[edit]

Ludwig Wittgenstein Ludwig Josef Johann Wittgenstein (26 April 1889 – 29 April 1951) was an Austrian-British philosopher who worked primarily in logic, the philosophy of mathematics, the philosophy of mind, and the philosophy of language.[4] From 1939–1947, Wittgenstein taught at the University of Cambridge.[5] During his lifetime he published just one slim book, the 75-page Tractatus Logico-Philosophicus (1921), one article, one book review and a children's dictionary.[6] His voluminous manuscripts were edited and published posthumously. Philosophical Investigations appeared as a book in 1953 and by the end of the century it was considered an important modern classic.[7] Philosopher Bertrand Russell described Wittgenstein as "the most perfect example I have ever known of genius as traditionally conceived; passionate, profound, intense, and dominating".[8] Born in Vienna into one of Europe's richest families, he inherited a large fortune from his father in 1913. Background[edit] The Wittgensteins[edit]

Ambiguity The concept of ambiguity is generally contrasted with vagueness. In ambiguity, specific and distinct interpretations are permitted (although some may not be immediately obvious), whereas with information that is vague, it is difficult to form any interpretation at the desired level of specificity. Context may play a role in resolving ambiguity. For example, the same piece of information may be ambiguous in one context and unambiguous in another. Linguistic forms[edit] Structural analysis of an ambiguous Spanish sentence:Pepe vio a Pablo enfurecidoInterpretation 1: When Pepe was angry, then he saw PabloInterpretation 2: Pepe saw that Pablo was angry.Here, the syntactic tree in figure represents interpretation 2. The context in which an ambiguous word is used often makes it evident which of the meanings is intended. More problematic are words whose senses express closely related concepts. Lexical ambiguity is contrasted with semantic ambiguity. Music[edit] Visual art[edit] Expressions[edit] .

Tractatus Logico-Philosophicus The Tractatus Logico-Philosophicus (widely abbreviated and cited as TLP) (Latin for Logical Philosophical Treatise or Treatise on Logic and Philosophy) is the only book-length philosophical work by the Austrian philosopher Ludwig Wittgenstein that was published during his lifetime. The project had a broad goal: to identify the relationship between language and reality and to define the limits of science.[1] It is recognized by philosophers as a significant philosophical work of the twentieth century. G. Wittgenstein wrote the notes for the Tractatus while he was a soldier during World War I and completed it during a military leave in the summer of 1918.[3] It was first published in German in 1921 as Logisch-Philosophische Abhandlung. The Tractatus employs an austere and succinct literary style. Wittgenstein's later works, notably the posthumously published Philosophical Investigations, criticised many of his earlier ideas in the Tractatus. Main theses[edit] Proposition 1[edit] , where

Argument In a typical deductive argument, the premises are meant to provide a guarantee of the truth of the conclusion, while in an inductive argument, they are thought to provide reasons supporting the conclusion's probable truth.[6] The standards for evaluating non-deductive arguments may rest on different or additional criteria than truth, for example, the persuasiveness of so-called "indispensability claims" in transcendental arguments,[7] the quality of hypotheses in retroduction, or even the disclosure of new possibilities for thinking and acting.[8] Formal and informal arguments[edit] Informal arguments as studied in informal logic, are presented in ordinary language and are intended for everyday discourse. Conversely, formal arguments are studied in formal logic (historically called symbolic logic, more commonly referred to as mathematical logic today) and are expressed in a formal language. Standard argument types[edit] Deductive arguments[edit] Validity[edit] For example: Soundness[edit]