Edward Said's "The Idea of Empire" feat Eqbal Ahmad - 1993 Arena Series. Daniel Tutt on Fethi Benslama. Sarah presenting Hagar to Abraham, Adriaen van der Werff, 1699 by Daniel Tutt The political philosopher Charles Taylor made an excellent observation recently when he pointed out that Islam is usually the culture that multiculturalism fails to adequately encompass in its pretensions towards universalism. 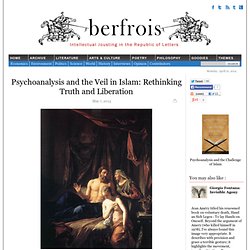 By excluding Islam on the basis of the very values that multiculturalism stands for, Islam presents to liberal multiculturalism, especially in Europe, the hidden Orwellian side of its so called “neutral” values: tolerance, pluralism and equality. While “we” in the west pride ourselves on a model of multicultural tolerance that is inclusive and broad, western philosophers since Descartes and Rousseau, who are in part the chief developers of liberal universalism, should also be read as developing a universalism that is exclusive, perhaps violently so towards others.

9/11 at 11: where the real ground zero of a new American century lies. 9/11 was the day America has promised never to forget, but today, 11 years on, is the quietest anniversary of that terrible day we have yet seen. Last year, the tenth anniversary and the first after the death of Osama bin Laden, felt almost like the final one. Today, most newspapers have some pro forma editorial on the importance of "pausing to reflect", and the two presidential campaigns are suspended.

But here in New York, the commemorations are minor, and the nation's politicians are not in town. In Washington, the National Cathedral isn't even bothering to hold a special service. September 11, as we never expected, is close to becoming just another day. If you go down to the World Trade Center site, you'll see some propaganda that the reconstruction process is "picking up speed", and that the city and the nation are "honoring the victims".

The LMDC members thought their decision was final. At least we have a memorial now. But something has changed between then and now. Philosophy in Wartime. Blighty’s Far Right by Roger Eatwell. Bloody Nasty People: The Rise of Britain’s Far Right, by Daniel Trilling, London: Verso, 240 pp. by Roger Eatwell Since the late 1990s, immigration has been a far more important issue in Britain than in almost any other European country. 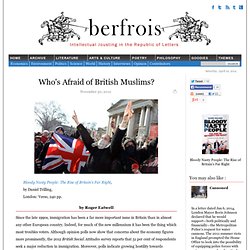 Indeed, for much of the new millennium it has been the thing which most troubles voters. Although opinion polls now show that concerns about the economy figures more prominently, the 2012 British Social Attitudes survey reports that 51 per cent of respondents seek a major reduction in immigration. Moreover, polls indicate growing hostility towards Muslims in particular: a 2012 Guardian poll found that only 28 per cent believe that Muslims want to integrate into British society. Paradoxically, anti-immigrant parties have attracted far less electoral support than in countries such as Austria, Belgium, France and the Netherlands, yet alone that achieved by the mainstream Swiss People’s Party (SVP) which in 2009 led a referendum that banned minaret-building. The Innocence of White People. So I’ve just received an email from a reader, asking whether I might have something to say about The Innocence of Muslims. 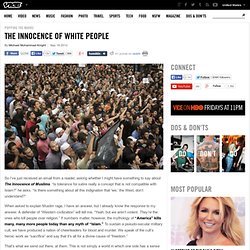 “Is tolerance for satire really a concept that is not compatible with Islam?” He asks. “Is there something about all this indignation that ‘we,’ the West, don’t understand?” When asked to explain Muslim rage, I have an answer, but I already know the response to my answer. A defender of “Western civilization” will tell me, “Yeah, but we aren’t violent. That’s what we send out there, at them. I am not trying to excuse violence. Last week, the day on which my column runs happened to fall on September 11.

The reason for my silence on 9/11 is that I am not only Muslim. As a Muslim, however, people do expect me to show evidence of my soul-searching over a single event, and I am regularly instructed by popular media to imagine 9/11 as a cancer within my own self. A short introduction: Faith-based finance. Muslim rage: Why they won’t calm down. The hijab has liberated me from society's expectations of women. When you think of the hijab, you probably don't think "political". Or "independent". Or "empowered". Feminist? Certainly not – feminism is far better known for burnt bras and slut-walks than headscarves.

There is much misunderstanding about how women relate to their hijab. But in a society where a woman's value seems focused on her sexual charms, some wear it explicitly as a feminist statement asserting an alternative mode of female empowerment. Wearing the hijab was not something I deliberately set out to do.

It makes many of us feel like a pawn in society's beauty game – ensuring that gloss in my hair, the glow in my face and trying to attain that (non-existent) perfect figure. Subconsciously, I tried to avoid these demands – wearing a hat to fix a bad-hair day, sunglasses and specs to disguise a lack of makeup, baggy clothes to disguise my figure.