East Lothian. East Lothian (Scots: Aest Lowden, Scottish Gaelic: Lodainn an Ear), is one of the 32 council areas of Scotland, and a lieutenancy area. 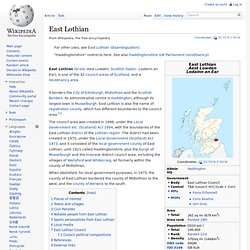 It borders the City of Edinburgh, Midlothian and the Scottish Borders. Its administrative centre is Haddington, although its largest town is Musselburgh. East Lothian is also the name of registration county, which has different boundaries to the council area.[1] When abolished, for local government purposes, in 1975, the county of East Lothian bordered the county of Midlothian to the west, and the county of Berwick to the south. Places of interest[edit] Towns and villages[edit] Civil Parishes[edit] East Lothian or Haddingtonshire Civil Parish map.[2] Scotfax: Haddingtonshire Feature Page on Undiscovered Scotland. 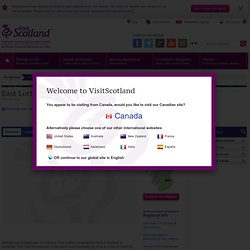 The most dramatic part of the region is undoubtedly the 40 or so miles of coastline running from Musselburgh - all but joined onto Edinburgh - round to Dunbar. Here you'll find golden beaches such as those at Gullane, Yellowcraig and Dunbar, spectacular cliffs, plus the world's finest selection of links golf courses including Gullane and North Berwick. Other popular attractions include studying the wildlife at North Berwick's award-winning Scottish Seabird Centre, viewing Scotland's Concorde up close at The National Museum of Flight at East Fortune, enjoying a flutter on the horse racing at Musselburgh and of course, enjoying a wee dram at Glenkinchie Distillery at the foot of the Lammermuir Hills. All of the region is within easy day-trip range from the capital an overnight stay will let you explore it properly. 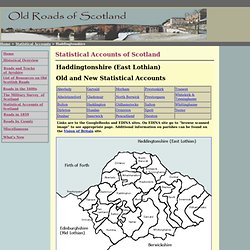 NSA p. 256 The nearest market is Haddington although much of the grain is taken to Dalkeith and Edinburgh where higher prices can be obtained. There is a daily post, and a coach between North Berwick and Edinburgh as well as a carrier. Roads are very good and allow more goods to be carted to market. Forty years ago the roads were very rough. Athelstaneford OSA Haddington market used. Welcome. East Lothian walks. Immediately adjacent to Edinburgh is East Lothian. 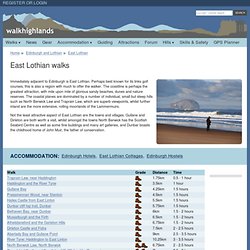 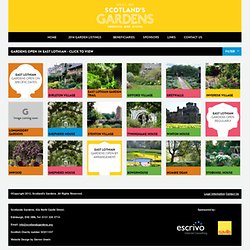 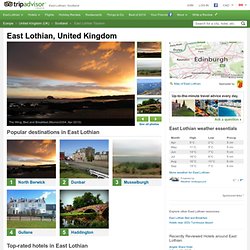 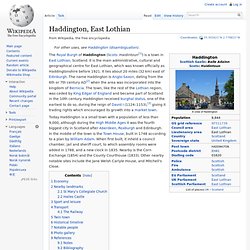 It is the main administrative, cultural and geographical centre for East Lothian, which was known officially as Haddingtonshire before 1921.

Dunbar. Coordinates: Dunbar (Scots [dʌnˈbaɾ] ( )) is a town in East Lothian on the southeast coast of Scotland, approximately 28 miles (45 km) east of Edinburgh and 28 miles (45 km) from the English Border at Berwick-upon-Tweed. 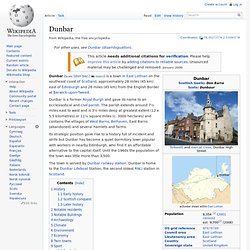 Dunbar is a former Royal Burgh and gave its name to an ecclesiastical and civil parish. The parish extends around 7½ miles east to west and is 3½ miles deep at greatest extent (12 x 5.5 kilometres) or 11¼ square miles (c. 3000 hectares) and contains the villages of West Barns, Belhaven, East Barns (abandoned) and several hamlets and farms. Its strategic position gave rise to a history full of incident and strife but Dunbar has become a quiet dormitory town popular with workers in nearby Edinburgh, who find it an affordable alternative to the capital itself. 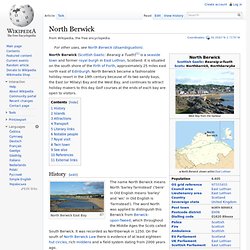 It is situated on the south shore of the Firth of Forth, approximately 25 miles east north east of Edinburgh. North Berwick became a fashionable holiday resort in the 19th century because of its two sandy bays, the East (or Milsey) Bay and the West Bay, and continues to attract holiday makers to this day. Golf courses at the ends of each bay are open to visitors. History[edit]

Prestonpans. Coordinates: Prestonpans is a small town to the east of Edinburgh, Scotland, in the unitary council area of East Lothian. 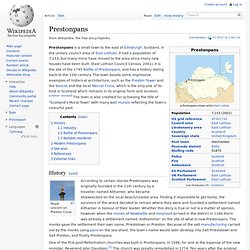 It had a population of 7,153, but many more have moved to the area since many new houses have been built. Prestonpans. North Berwick Law. Geologically, the law is a volcanic plug of hard phonolitic trachyte rock of Carboniferous (Dinantian) age.[1] It has survived the scraping glaciers of the ice age. It is a crag and tail with a prominent tail extending eastwards.

The summit bears remnants of an Iron Age hill fort, and the ruins of later military buildings that were once used by lookouts in both the Napoleonic Wars, and in World War II. The famous whale's jawbone, pictured below right, collapsed in June 2005 after rotting away, and was removed by helicopter, much to the surprise of North Berwick residents. A jawbone has stood there since 1709, the last one having been there since 1933. On 26 June 2008, a fibreglass replica whale bone, the same size as the one that was removed in 2005, was airlifted into place to give North Berwick Law back its famous landmark.[2] The funding for the replica was donated by an anonymous friend of North Berwick. See also[edit] Gallery[edit] References[edit] External links[edit] Coordinates:

Traprain Law. Coordinates: Traprain Law from the north Traprain Law is a hill about 221m (724 feet) in elevation, located 6 km (3.7 mi) east of Haddington in East Lothian, Scotland. It is the site of an oppidum or hill fort, which covered at its maximum extent about 16 ha (40 acres) and must have been a veritable town. Whether it was a seasonal meeting place or permanent settlement is a matter of speculation. Traprain Law. Bass Rock. Bass Rock, view from Tantallon courtyard Geography and geology[edit] Map of Bass Rock The island is a volcanic plug of phonolitic trachyte rock of Carboniferous (Dinantian) age.[6] The rock was first recognised as an igneous intrusion by James Hutton, while Hugh Miller visited in 1847 and wrote about the Rock's geology in his book Edinburgh and its Neighbourhood, Geological and Historical: with The Geology of the Bass Rock.[4][7] The Bass Rock stands over 100 m high in the Firth of Forth Islands Special Protection Area which covers some, but not all of the islands in the inner and outer Firth.

The Bass Rock is a Site of Special Scientific Interest in its own right, due to its gannet colony. Much of the island is surrounded by steep cliffs and rocks, with a slope facing south south west which inclines at a steep angle. Surrounding islands[edit] Bass Rock. Castles in East Lothian. Tantallon Castle. Tantallon Castle is a semi-ruined mid-14th-century fortress, located 5 kilometres (3.1 mi) east of North Berwick, in East Lothian, Scotland. It sits atop a promontory opposite the Bass Rock, looking out onto the Firth of Forth.

The last medieval curtain wall castle to be constructed in Scotland,[1] Tantallon comprises a single wall blocking off the headland, with the other three sides naturally protected by sea cliffs. Tantallon was built in the mid 14th century by William Douglas, 1st Earl of Douglas. It was passed to his illegitimate son, George Douglas, later created Earl of Angus, and despite several sieges, it remained the property of his descendants for much of its history. It was besieged by King James IV in 1491, and again by his successor James V in 1528, when extensive damage was done. Tantallon Castle. Dirleton Castle.

Museum - 800 Years of History! Prestongrange is a free open-air museum. With both indoor and outdoor sites it a great place to visit no matter the weather. It was the location of a: - 16th century harbour, - 17th century glass works, - 18th/19th century potteries and a - 19th/20th century coal mine and brick works. East Lothian. William Dunbar. William Dunbar (born 1459 or 1460) was a Scottish makar poet active in the late fifteenth century and the early sixteenth century. He was closely associated with the court of King James IV of Scotland[1] and produced a large body of work in Scots distinguished by its great variation in themes and literary styles. William Dunbar. John Knox. John Knox.