Gallows humor. Gallows humor is humor in the face of or about very unpleasant, serious, or painful circumstances. 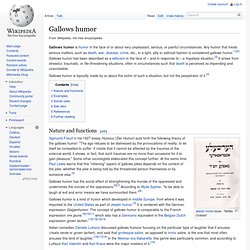 Any humor that treats serious matters, such as death, war, disease, crime, etc., in a light, silly or satirical fashion is considered gallows humor.[1][2] Gallows humor has been described as a witticism in the face of – and in response to – a hopeless situation.[3] It arises from stressful, traumatic, or life-threatening situations, often in circumstances such that death is perceived as impending and unavoidable. Gallows humor is typically made by or about the victim of such a situation, but not the perpetrator of it.[4] Nature and functions[edit] Gallows humor has the social effect of strengthening the morale of the oppressed and undermines the morale of the oppressors.[6][7] According to Wylie Sypher, "to be able to laugh at evil and error means we have surmounted them.

Examples[edit] From William Shakespeare's play Romeo and Juliet, Act 3, Scene 1: Social uses[edit] See also[edit] Gallows humour. Welcome to Gallows Humor Comics. Gallows Humor. "Whatever success I've had aside, between you and me? 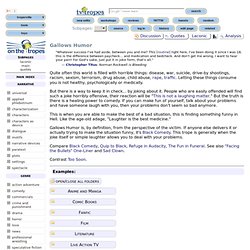 This [routine] right here, I've been doing it since I was 18, this is the difference between paycheck... and medication and bedcheck. And don't get me wrong. I want to hear your pain! For God's sake, just put it in joke form, that's all. " Quite often this world is filled with horrible things: disease, war, suicide, drive-by shootings, racism, sexism, terrorism, drug abuse, child abuse, rape, traffic.

Open/close all folders Anime and Manga The Trigun manga does this all the time, hence the Mood Whiplash and the sudden shifts to SD mode. Comic Books John Callahan draws politically incorrect comics making fun of disabled people, which has to do with the fact that Callahan himself is seriously disabled. Fanfic Film The ending of Monty Python's Life of Brian looks heart-breaking at first... but it is rendered hysterically funny when everyone starts singing "Always look on the Bright Side of Life". Inspired on the western front: The loving messages and gallows humour sketches injured Tommies entrusted to WWI nurse.

By Julian Gavaghan Published: 13:25 GMT, 9 May 2012 | Updated: 19:05 GMT, 9 May 2012 These remarkable sketches drawn by First World War soldiers recovering from horrific injuries in the trenches have been discovered after nearly 100 years. 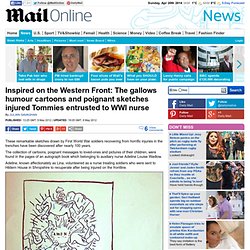 The collection of cartoons, poignant messages to loved-ones and pictures of their children, were found in the pages of an autograph book which belonging to auxiliary nurse Adeline Louise Wadlow. Adeline, known affectionately as Lina, volunteered as a nurse treating soldiers who were sent to Hildern House in Shropshire to recuperate after being injured on the frontline. Hallows humour: A page from the autograph book belonging to nurse Lina Wadlow shows death in the trenches - in a dark interpretation of what would be a perfect day there - in a 1918 drawing by Private Richards Famous quotes: Inspiring lines that reveal a Paschendaele veteran's feelings about his role in the war. 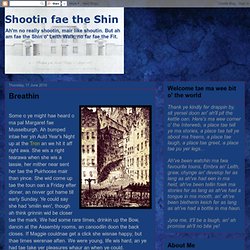 Ah bumped intae her yin Auld Year's Night up at the Tron an we hit it aff right awa. She wis a right tearawa when she wis a lassie, her mither near sent her tae the Puirhoose mair than yince. She wid come up tae the toun oan a Friday efter dinner, an nivver got hame till early Sunday. Ye could say she had 'smilin een', though ah think grinnin wid be closer tae the mark. We had some rare times, drinkin up the Bow, dancin at the Assembly rooms, an canoodlin doon the back closes.

Under the ivy. Ye wid think, wid ye no, that Edinburgh's New Toun wid be a grand place tae bide. 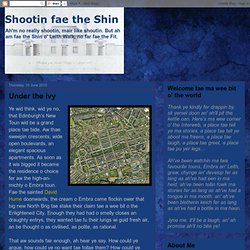 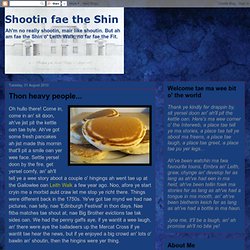 Come in, come in an' sit doon, ah've jist pit the kettle oan tae byle. Ah've got some fresh pancakes ah jist made this mornin that'll pit a smile oan yer wee face. Settle yersel doon by the fire, get yersel comfy, an' ah'll tell ye a wee story aboot a couple o' hingings ah went tae up at the Gallowlee oan Leith Walk a few year ago. Noo, afore ye start cryin me a morbid auld craw let me stop ye richt there. Things were different back in the 1750s. Hingins were great places tae meet aw yer pals an' catch up oan the gossip. Certain things tho nivver chynge, an' certain crimes were aye seen as beyond the pale.

Wee Norrie Ross had a hard start in life. These things nivver seem tae gang as ye plan them tho. Strange phenomena...