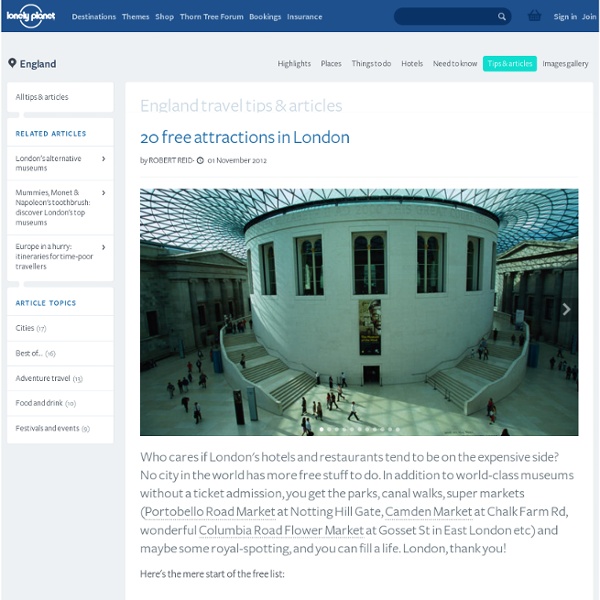 Who cares if London's hotels and restaurants tend to be on the expensive side? No city in the world has more free stuff to do. In addition to world-class museums without a ticket admission, you get the parks, canal walks, super markets (Portobello Road Market at Notting Hill Gate, Camden Market at Chalk Farm Rd, wonderful Columbia Road Flower Market at Gosset St in East London etc) and maybe some royal-spotting, and you can fill a life. London, thank you! Here's the mere start of the free list: 1. Around, more or less, since the 13th century, the Borough Market is stuffed with food-lovers and all you need for a memorable grab-and-go breakfast or lunch. 2. Hidden under Waterloo Bridge, the institute features four cinemas (not free) and the fun Mediatheque, where you can peruse DTV/film archives and watch for free. 3. Unreal; one of London's top attractions, and absolutely free. 4. 5. 6. 7. 8. 9. Those Victorians sure liked to 'c & c' (collect and catalogue). 10. 11. 12. 13. 14. 15. 16.

Top 20 free attractions in Paris City of love, fashion capital, literary paradise…Paris has many different guises. And while museum entry can be steep and fine dining comes at a premium, the French capital can also be a very cheap date. Whether you go weak at the knees for soaring church spires or want to rub elbows at an authentic French market, let yourself be seduced by our top 20 must-sees. They are all are completely gratuit, letting you save the euros for the really important stuff: wine, cheese and a flashing Eiffel Tower keyring you’ll regret the minute you return home.

World Religion Culture and People Sanctuary of Truth is a sanctuary under construction in Pattaya, Thailand. It is an all wood construction building, resembling a temple, and filled inside and out with wood sculpture based on traditional Buddhist and Hindu motifs. The building, which resembles a temple, is close to 105 meters (345 feet) high and covers and covers an area of more than two rais.

Photos: Tetrapod beaches of Japan ~ Pink Tentacle - StumbleUpon Near Tappi Saki, Aomori (Photo: Mr_M_Montgomery) Hit the beach anywhere in Japan, and you are likely to see endless piles of tetrapods -- enormous four-legged concrete structures intended to prevent coastal erosion. By some estimates, more than 50% of Japans 35,000-kilometer (22,000-mi) coastline has been altered with tetrapods and other forms of concrete. Critics, who blame the tetrapod invasion on decades of excessive government spending designed to bolster the construction industry, argue that in addition to posing a danger to swimmers, surfers and boaters, tetrapods actually accelerate beach erosion by disrupting the natural processes that shape the coastal environment. Meanwhile, others have developed an aesthetic appreciation of the tetrapod landscape, as evidenced by a host of stunning Japanese tetrapod photos on Flickr. Location unknown (Photo: saksak)

Glasgow revealed as the UK city which has inspired the most song titles February 2, 2012 12:01 Scottish city narrowly edges out Edinburgh, Birmingham and Liverpool More Various Artists news, reviews, videos and tour dates Buy Various Artists music from Amazon Glasvegas, who are from Glasgow Photo: Tommy Ga-Ken Wan/Press The London Street Food Guide - Compiled by Victoria Philpott Street food in London is tasty, cheap and plentiful – when you know where to look. If you’re looking for cheap eats London is the place to be. The creativity behind our street food stalls when it comes to cooking and serving is inspiring. There really is something for everyone. Five Places That You Shouldt Miss in Prague Prague, which is believed to be one of the most beautiful and picturesque city of Europe is also known as one of the most well-liked holiday destinations in the whole world. The popularity of this place has increased considerably owing to its rich culture and historical background. This captivating city is filled with spectacular medieval churches, castles, art galleries and museums. Those who want to avoid the regular tourist crowd should take a tour of the surrounding areas. This will give them a chance to the get a view of the real Prague.

15 Most Magical Places in the World Want to share the magic? Tweet or Stumble this article! Wizards, sorcerers, hobbits and goblins. This maybe the stuff of fairy-tales but you can bring magic to life! Five Towns of Cinque Terre Located on the Italian Riviera, Cinque Terre is a rugged coastline, made up of “The Five Lands” or the five villages: Vernazza, Corniglia, Monterosso al Mare, Riomaggiore, and Manarola. The Cinque Terre is so appealing because it does not display any modern developments in its architecture. Many of the residents over the centuries have built terraces on the cliffs that overlook the sea from the coast. The villages are only connected by paths (specifically the Blue Path of Cinque Terre that connects all five villages and is a famous hiking trail), boats, or trains—nope, no cars. You definitely will not need to spend more money renting a car if you choose to visit the Cinque Terre; you can just focus on these almost mythical lands themselves.