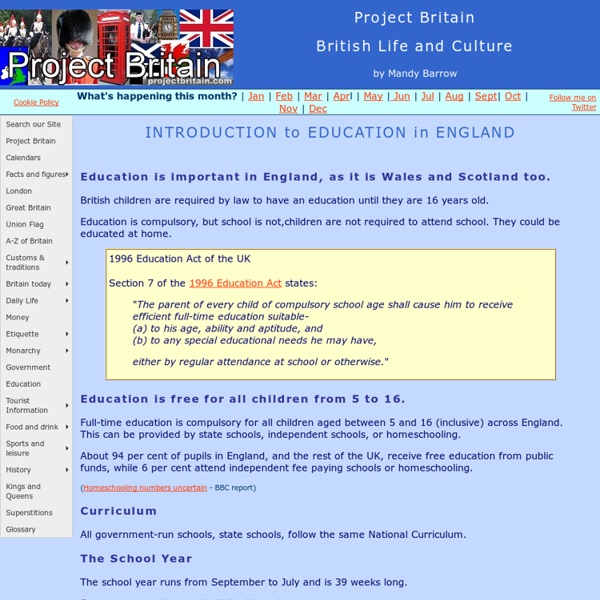 British children are required by law to have an education until they are 16 years old. Education is compulsory, but school is not,children are not required to attend school. They could be educated at home. Full-time education is compulsory for all children aged between 5 and 16 (inclusive) across England. This can be provided by state schools, independent schools, or homeschooling. About 94 per cent of pupils in England, and the rest of the UK, receive free education from public funds, while 6 per cent attend independent fee paying schools or homeschooling. (Homeschooling numbers uncertain - BBC report) All government-run schools, state schools, follow the same National Curriculum. The school year runs from September to July and is 39 weeks long. For many areas the year is divided into six terms: September to October October to December January to February February to March April to May June to July (Some counties in England still follow the traditional three terms a year.) Related:  England

England profile - Overview 13 December 2012Last updated at 11:48 ET England is the largest constituent part of the United Kingdom, and accounts for 83 per cent of its population and most of its economic activity. Issues affecting the United Kingdom as a whole therefore also apply to England in particular, especially in the case of identity politics. England's continuing contribution to world civilisation is significant, ranging from language to sport, music and law. The various kingdoms set up by Germanic settlers in the 5th-6th centuries were finally united into the Kingdom of England between 927 and 954. Oxford University is England's oldest university Continue reading the main story Politics: England has no governmental institutions separate from those of the UK. Country profiles compiled by BBC Monitoring England gradually annexed Wales and established hegemony over Ireland and Scotland. Curry houses in London: Immigration has added to England's ethnic and cultural diversity Identity Culture Law

British Life and Culture in the UK - Woodlands Junior School Fly Through 17th Century London M@ Fly Through 17th Century London A group of students at De Montfort University created this fly-through of 17th century London (skip to 0:50 in the video to get to the juicy stuff). The model focuses on the area around Pudding Lane and the bakery of Thomas Farriner, where the Great Fire of 1666 started. Although most of the buildings are conjectural, the students used a realistic street pattern and even included the hanging signs of genuine inns and businesses mentioned in Samuel Pepys' diary. More information on the source material and processes can be found on the team's blog. The project is an entry in the Off The Map competition, in which students were invited to build 3-D digital models based on maps at the British Library, and using software by Crytek.

Tell Me about Christmas - Part 2 Advent Calendar Hi, I’m gonna tell you about our advent calendar. This has got all the days until Christmas Day on. And when I was a child we’d have these, and in the family, each child would take it in turns, different day, to open the window and would be very excited about it. Mistletoe People often put mistletoe in their homes at Christmas. Christmas Cracker Christmas crackers are something that most people have at Christmas but I think they… It’s a bit of a silly tradition really because nobody, nobody takes Christmas crackers very seriously. And then inside the cracker, you find usually three things I think. So I think what happens is people kind of think, “oh, we’re not gonna bother having Christmas crackers because they are rubbish anyway” but then you just feel like, “oh well, but it wouldn’t be Christmas without Christmas crackers”.

customs-and-culture Every November 5th, on a cold winter’s night, the dark skies of England are lit with bright fireworks and filled with the smell of wood smoke. People recite the famous lines: “Remember, remember the fifth of November,Gunpowder, Treason and Plot.” By Charlotte Mountford riends and families gather in private gardens or public parks to light bonfires and set off the fireworks – ‘rockets’, ‘sparklers ’, ‘catherine wheels’ and more. This is called ‘Guy Fawkes Night’ or ‘Bonfire Night,’ which is quite an unusual tradition, and all because four hundred years ago, on November the fifth, 1605, a man named Guy Fawkes tried to assassinate the King of England and all his government. Fawkes’ plan is known as the “Gunpowder Plot.” Like most plots, wars and conspiracies of the age, his motive was religion: Catholics had been fighting Protestants in England for decades, and though both were Christian, each side bitterly persecuted the other. Your Comments

London Top 10 Sights - Explore the Highlights Explore the Top 10 Sights London belongs to the most popular destinations for city trips. Among the long list of reasons for that you will find at the top the long history, unique antique and modern artworks, the international reputation and of course the wealth of tourist attractions. London Tourist Map for Sightseeing With the interactive map of city-walks you will see the locations of the top 10 highlights of London at a glance.