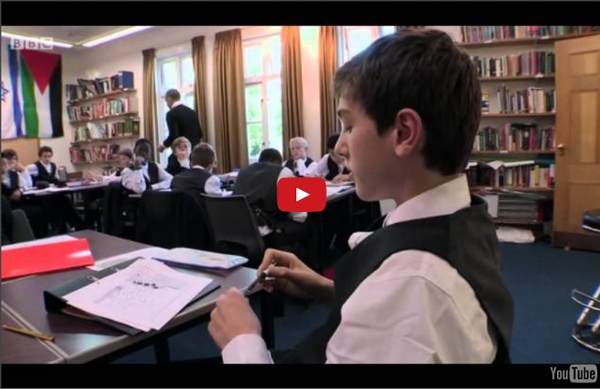 British Royal Family Arms Royal Coat of Arms The main element of the Royal Arms is the shield which is divided into four quarters (see diagram). The three golden lions on a red background, symbolising England, occupy the first and fourth quarters. The lion and the unicorn supporting the shield represent England and Scotland respectively. Around the shield is a belt or strap with the motto Honi soit qui mal y pense ("Evil to him who evil thinks"), the symbol of the Order of the Garter. The Royal Arms we see today have evolved over nine centuries, since Richard 1st (the Lionheart) chose a shield of three lions to represent the three areas England, Normandy and Aquitaine - which were associated with the English crown. This symbol on the King's shield would immediately identify him in the midst of battle. The Arms of the Stuart kings remained very similar to those of James 1st. The succession of George, Elector of Hanover, to the throne as George 1st in 1714 led to further changes to include his territories.

ProjectBritain.com - A resource of British Life and Culture in the UK by Woodlands Junior British Life and Culture in the UK - Woodlands Junior School English Blog British Culture, Traditions and Customs This page has moved to ProjectBritain.com our new British life and Culture website Britain is full of culture and traditions which have been around for hundreds of years. British customs and traditions are famous all over the world. Enjoy! Learning about War: Using BBC Video to Teach the Second World War The Second World War dominates the landscape of the twentieth century. Just over two decades after the ‘war to end all wars’, Europe was again plunged into turmoil following the German invasion of Poland. What followed was one of the most destructive wars in history. Learning about war is key to understanding the events of the twentieth century, which irrevocably changed the future as well as the map of Europe. BBC Active has a range of series which are an effective way of learning about war. The following videos from the BBC are ideal history teaching resources to supplement classroom and textbook learning: D-Day to Berlin This is a series of history videos for GCSE students which examines Allied military operations from D-Day to VE Day through the accounts of some of the British, American and German soldiers involved in the great military offensives which were to change the course of history in Europe. Allies at War – Episode 2 The Dream that Died – Episode 3 Carrie’s War Time to Remember

Stonehenge - Tour around Britain Stonehenge is a mystical place. Its stone circles are probably more than 4,000 years old. The huge stones come from an area about 30 km north of Stonehenge. The smaller stones possibly are from the Preseli Mountains in Wales, almost 400 km away from Stonehenge. Nobody knows for sure what the function of Stonehenge was. Maybe it was a druid temple.

Let's talk about the UK (still with Scotland) At the beginning of the new school year teachers usually explain to their students what they are going to study. Sometimes efl teachers not only teach grammar but also British culture, so one of the first cultural topics they discuss with their students are the geography of the UK and its form of government. Here you can find an interactive mindmap, a digital poster and a collection of useful websites, just to simplify the work. Click on the Glogster digital poster below, you will find general information about the United Kingdom and some videos. Now take a look at my Cacoo mindmap below about the UK form of government. You can also click on the following link to enlarge the above image: Last September, 18th Scottish people voted for Scotland independence. Scottish referendum explained for non-Brits If you want more general information about the Uk government, the Queen and the Royal Family, open my Blendspace lesson.