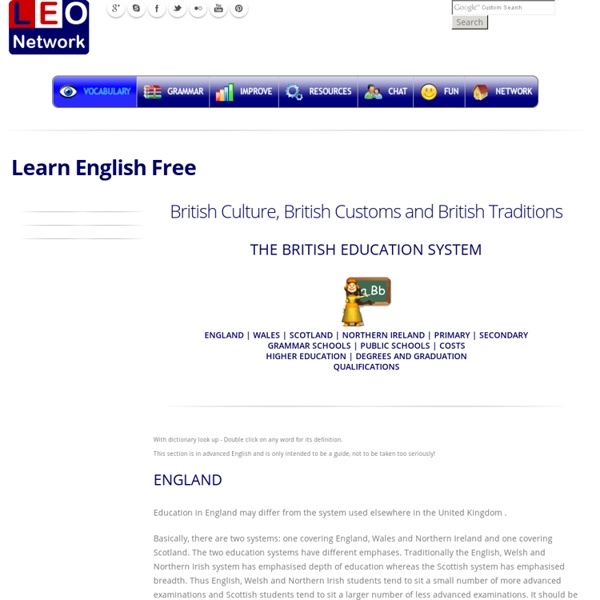 With dictionary look up - Double click on any word for its definition. This section is in advanced English and is only intended to be a guide, not to be taken too seriously! England Education in England may differ from the system used elsewhere in the United Kingdom . Basically, there are two systems: one covering England, Wales and Northern Ireland and one covering Scotland. Education in Wales Nowadays education in Wales differs slightly from the system used in England. The school years in England and Wales In general, the cut-off point for ages is the end of August, so all children must be of a particular age on the 1st of September in order to begin class that month. In some regions of England, pupils attend a Lower (Primary) School before going to, a Middle School between 8 and 12 or, more commonly 9 and 13, and then a High School or Upper School. Education in Scotland Education in Scotland differs from the system used elsewhere in the United Kingdom . The school years in Scotland Life

Australia Australia's ecosystem is an unusual one because of its remote location. As a result, there are many animal species that occur here and nowhere else in the world, such as the platypus, kangaroo, echidna, and koala. Australia has 516 national parks to protect its unique plants and animals. One of Australia's most amazing sites rises like an enormous whale's back from a flat red-soil desert called the Red Center. Australia is home to many of the deadliest species of animals on the planet. There are several types of rain forests in Australia.

Canada Facts: Interesting Canada Facts for Kids 25 Amazing Facts about Canada Here on this page about Canada Facts you will find 25 fascinating facts and interesting information - not only for kids but for all who want to know more about this wonderful country. Canada is the second largest country in the world after Russia. The country is divided into ten provinces and three territories. 25 Canada Facts and Amazing Canada Superlatives Nunavut territory in Northern Canada was just created in 1999 and is home to the Inuit population.Canada has the longest coastline in the world with 202,080km (WorldFactBook)Did you know that the number plate for cars, motorbikes and snowmobiles in the Northern State of Nunavut is the shape of a polar bear? Canadian polar bear in the tundra at Hudson Bay Canada's longest river is McKenzie River in the North West. Ice Hockey Match between Canada and the USA Canada Facts: References Image Credits on Canada Facts: Shutterstock.com, icehockey image by Iurii Osadchi Read more interesting facts about Canada

Teaching Jobs | Supply Teaching Jobs - Teaching Personnel Register for day to day or long term teaching jobs today In England children must attend school from the age of 5 to 16 and many extend their education to 18 before entering university or college. From the age of 5 to 11, children attend primary schools (combined infant and junior schools) and generally at 11 they then transfer to secondary schools. The structure of the education system in England has changed considerably over the last few years, reflecting the Government's aims to improve quality, increase diversity and make institutions more accountable to students, parents, employers and taxpayers. Primary State pre-school education is available for ages two to four/five through playgroups and nursery schools. Compulsory education begins at five in England and Wales. Secondary Compulsory education currently ends at age sixteen, though many pupils stay on beyond the minimum leaving age. The School Day Teaching hours in schools are from approximately from 8.30am to 3.30pm. Primary School

Australia Facts for Kids: Facts about Australia for Kids Interesting Facts for Kids Here are some interesting Australia Facts which were chosen and researched by kids especially for kids. Name: Commonwealth of AustraliaGovernment: DemocracyPopulation: 23, 6 million (2013)Capital: Canberra with 380,000 people (2013)Language: English Australia Geography Australia is the smallest inhabited continent of the seven continents can also be considered the largest island in the world. In fact it is an island continent. The country is divided into six states (Southern Australia, Western Australia, New South Wales, Queensland, Victoria and Tasmania) and two self-governing territories: Northern Territory and Australian Capital Territory (which is around Canberra, the capital city). The main cities in Australia are: Sydney, Melbourne, Perth, Brisbane, Darwin, Adelaide, Hobart and Canberra (capital city) The highest mountain of Australia is Mount Kosciuszko with 2.228metres or 7,310ft. Did you know? Australia Facts:Australia Attractions for Kids Australian Animals

British school rules English-speaking countries: Canada - Learning English Online Geography Canada is a country occupying(to fill either time or space) most of northern North America, extending from the Atlantic Ocean in the east to the Pacific Ocean in the west and northward into the Arctic Ocean. It is the world's second largest country by total area. Canada's common border with the United States to the south and northwest is the longest in the world. Canada's capital city is Ottawa. It is the fourth-largest municipality(a district with a government that typically encloses no other governed districts) in the country with a population of 1,130,761. Society and culture Canadian culture has historically been influenced by British, French, and aboriginal(original or indigenous to a place) cultures and traditions. Population Canada's total population in July 2010 was estimated to be 33,759,742 people. Languages Canada's two official languages are English and French. Religion Government and politics Economy