Gumi. GUMI (グミ) is a Japanese VOCALOID developed and distributed by Internet Co., Ltd.. as Megpoid (メグッポイド), and was initially released June 2009 for the VOCALOID2 engine. 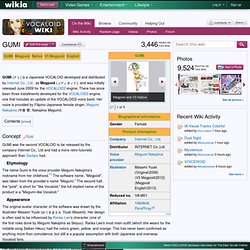 There has since been three installments developed for the VOCALOID3 engine, one that includes an update of the VOCALOID2 voice bank. Her voice is provided by Filipino-Japanese female singer, Megumi Nakajima (中島 愛; Nakajima Megumi). Concept Edit GUMI was the second VOCALOID to be released by the company Internet Co., Ltd and had a more retro-futuristic approach than Gackpo had. Etymology Edit The name Gumi is the voice provider Megumi Nakajima's nickname from her childhood.[1] The software name, "Megpoid", was taken from the provider's name "Megumi. " Appearance The original avatar character of the software was drawn by the illustrator Masami Yuuki (ゆうきまさみ Yuuki Masami).

Her belt buckle, incorporates the Tenori-on devices design. Gumi's Megpoid English illustration has a different direction to the past Gumi illustrations.[2] Calendar. 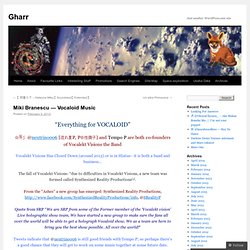 From the “Ashes” a new group has emerged: Synthesized Reality Productions, @SRealityP Quote from SRP “We are SRP from some of the Former member of the ‘Vocalekt vision’ Live holographic show team, We have started a new group to make sure the fans all over the world will be able to get a holograph Vocaloid show. Tweets indicate that @neutrino006 is still good friends with Tempo P; so perhaps there’s a good chance that they will get to work on some music together at some future date. 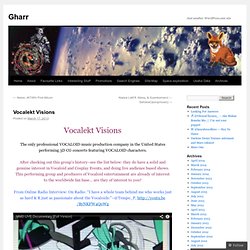 After checking out this group’s history–see the list below: they do have a solid and genuine interest in Vocaloid and Cosplay Events, and doing live audience based shows. This performing group and producers of Vocaloid entertainment are already of interest to the worldwide fan base… are they of interest to you? From Online Radio Interview: On Radio: “I have a whole team behind me who works just as hard & R just as passionate about the Vocaloids:”–@Tempo_P, ☆ Vocalekt Visions is made up of team members with various skills, knowledge, and interests. The video above is about VLP Projects, a member of ☆ Vocalekt Visions interested in filming videos and producing innovative screen technology to show those films. ☆ WVD01–World Vocaloid Dance 01 Group. World Vocaloid Dance 01. Vocalekt Visions (Tempo_P) Twitter...

VIRTUAL VOCAL SOFTWARE - VOCALOID3 Megpoid English. VOCALOIDTM3 Megpoid English is the virtual vocal software based on voice of Megumi Nakajima who is a Japanese singer and voice actress. 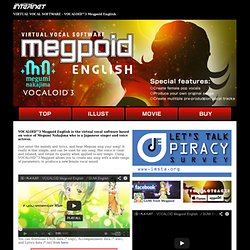 Just enter the melody and lyrics, and hear Megumi sing your song! It really is that simple, and can be used for any song. Her voice is clear and relaxed, and retain its quality when applied to any tempo. Using VOCALOIDTM3 Megpoid allows you to create any song with a wide range of parameters, to produce a new female vocal sound. You can download VSQX data (*.vsqx), Accompaniment data (*.wav), and Lyrics data (*.txt) from here. < About VOCALOIDTM >Vocaloid is a technology for singing voice synthesis developed by Yamaha, and the name of this software application. VOCALOID 3 Library Megpoid Complete Adult Power Sweet Whisper. [GUMI] Promisiuni [Romanian Vocaloid] ORIGINAL. [GUMI] Freely Tomorrow [MMD] [VOCALOID3] [GUMI] Secret Princess [VOCALOID3] Summer Festival [Vocaloid][Original][PV][Hatsune Miku][Megpoid][SF-A2 Miki][Vocalekt Visions] Theme 41-4 DEMO BGM by 流れ星P. [GUMI] Trust [VOCALOID COVER] [VANDREAD] - take 1.