How Stalin Hid Ukraine's Famine From the World - The Atlantic. In the years 1932 and 1933, a catastrophic famine swept across the Soviet Union. 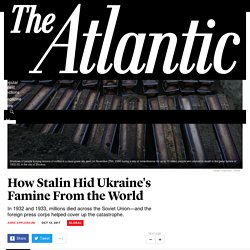 Ukraine Is Losing Fewer Weapons to Theft, but High-Level Corruption Persists. A member of the Independent Defence Anti-Corruption Committee says the international community must leverage its security aid to force reforms. 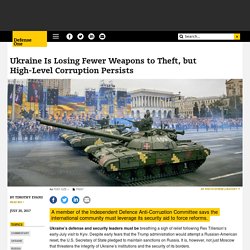 Ukraine’s defense and security leaders must be breathing a sigh of relief following Rex Tillerson’s early-July visit to Kyiv. Despite early fears that the Trump administration would attempt a Russian-American reset, the U.S. Secretary of State pledged to maintain sanctions on Russia. It is, however, not just Moscow that threatens the integrity of Ukraine’s institutions and the security of its borders. Tillerson highlighted the importance of tackling corruption in a July 9 joint briefing with Ukrainian President Petro Poroshenko – and though he emphasized the problems in the judiciary, security assistance must not have been far from his mind.

When war first broke out in Eastern Ukraine, there were reports of international assistance being waylaid through theft and reselling. Subscribe Receive daily email updates: Subscribe to the Defense One daily. Ukraine's Drone Army Was Born In a Crucible of Conflict. Seeing the Ukrainians need for drones, in July 2016 the U.S. did include some in a military assistance program, supplying 72 RQ-11 Raven drones worth about $12 million. 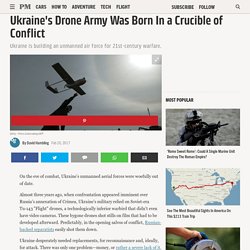 Although proving capable in Iraq and Afghanistan, they quickly became a horrible vulnerability in the field. Russians are much more adept at 'radio-electronic warfare', and Russian-backed rebels had little trouble countering them. Crimea under siege: Revisiting the Crimean referendum. The 7 August skirmish on the Crimean peninsula has ratcheted tensions between Ukraine and Russia, calling into question Kyiv’s legitimacy and claims to the territory. 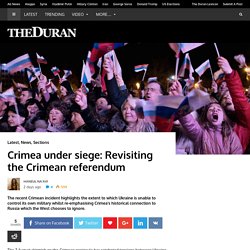 Currently, both nations are on high alert as they boost their military defences following a terrorist plot sanctioned by the Ukrainian Armed Forces (UAF). RT reports. “[The] FSB received a warning from Armyansk locals, who had reported on some suspicious people in military uniforms in their town,” and “detected some 20 people in the area, who were loading explosives and weapons from their hideout.

Once the suspects noticed the Russian security forces, they immediately opened fire, shooting to kill.” Acting Ukrainian President Petro Poroshenko’s immediate, scripted reaction was to deny involvement. The Murder of Journalist Oles Buzina in Ukraine. Two people were arrested in Ukraine on June 18 for the murder of journalist Oles Buzina on April 16, 2015. 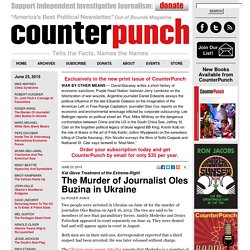 The two are said to be members of neo-Nazi paramilitary forces. Andriy Medevko and Denys Polischuk appeared in court separately on June 19. They were denied bail and will appear again in court in August. Both men are in their mid-20s. Korrespondent reported that a third suspect had been arrested. Place of the Year 2014 nominee spotlight: Ukraine. With only one more week left until we announce Place of the Year 2014, we’d like to spotlight another one of the places on our shortlist: Ukraine. 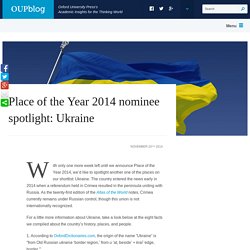 The country entered the news early in 2014 when a referendum held in Crimea resulted in the peninsula uniting with Russia. As the twenty-first edition of the Atlas of the World notes, Crimea currently remains under Russian control, though this union is not internationally recognized. For a little more information about Ukraine, take a look below at the eight facts we compiled about the country’s history, places, and people. 1. According to OxfordDictionaries.com, the origin of the name “Ukraine” is “from Old Russian ukraina ‘border region,’ from u ‘at, beside’ + kraĭ ‘edge, border.’” 2. 3. 4. Meet The Young Revolutionary Taking Ukrainian Politics By Storm. In just under a year, Hanna Hopko has gone from being a ringleader in anti-government protests to taking a seat in Ukraine's new parliament. 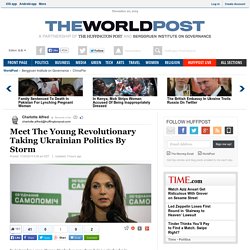 Her trajectory is symbolic of the momentous shifts Ukraine has undergone in the past 12 months. Her story also highlights the challenges faced by the young activists who ousted former President Victor Yanukovych and now seek to implement their vision of a more democratic, less corrupt Ukraine. Keith Gessen · Diary: In Odessa · LRB 17 April 2014. Ukraine's Mob War. Death had come to visit Kevin Biegel. 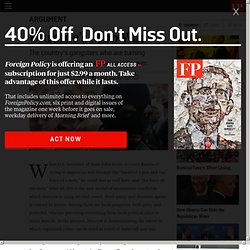 He was a healthy 32-year-old on his honeymoon in Italy, and his heart suddenly stopped. Perhaps it was a freak occurrence or a byproduct of the daily stresses he dealt with as a Hollywood writer and producer. It wasn't cocaine, as some might have guessed. Doctors plugged stents into his heart but couldn't install anything to keep Biegel from obsessing about his own mortality. Thought about death crept into his children's playtime, on the highway, and most significantly, into his creative universe. An alum of the South Park writing room, Biegel, now 37, created the TBS series Cougar Town and wrote for Scrubs. Understanding Ukraine in 15 Minutes. Ukraine: Lies and Realities. 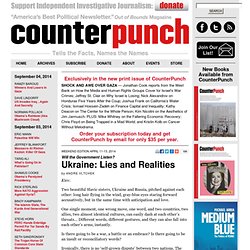 Two beautiful Slavic sisters, Ukraine and Russia, pitched against each other: long hair flying in the wind, gray-blue eyes staring forward accusatively, but in the same time with anticipation and love. One single moment, one wrong move, one word, and two countries, two allies, two almost identical cultures, can easily dash at each other’s throats… Different words, different gestures, and they can also fall into each other’s arms, instantly. Is there going to be a war, a battle or an embrace? Is there going to be an insult or reconciliatory words? Ironically, there is no ‘self-grown dispute’ between two nations. As Sergei Kirichuk, leader of progressive movement ‘Borotba’, explained: “We have extensive invasion of western imperialism here. Ukraine, a Fascist Coup? Anglo-American Axis: Losing Ukraine or Losing Europe, Putin Can Win the Game? What is it that really “scared the hell” out of the Anglo-Americans? 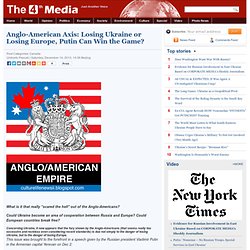