The Internet of Military Things, and a Former CIA Director on UFOs - The Debrief. Welcome to this week’s edition of The Intelligence Brief. 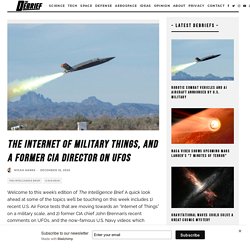 A quick look ahead at some of the topics we’ll be touching on this week includes 1) recent U.S. Air Force tests that are moving towards an “Internet of Things” on a military scale, and 2) former CIA chief John Brennan’s recent comments on UFOs, and the now-famous U.S. Navy videos which purportedly show such unidentified objects. With gatewayONE, Fifth Generation Aircraft Moves Toward Internet of Things In recent days, the U.S.

Boeing unveils first loyal wingman combat drone prototype with artificial intelligence. Boeing has presented the prototype of a unmanned loyal wingman aircraft to the royal australian air force. the drone, which employs artificial intelligence to extend the capabilities of manned and unmanned platforms, is the first to be designed, engineered and manufactured in australia in more than 50 years and marks the company’s largest investment in an unmanned aircraft outside the US. images courtesy of boeing more than 35 members of australian industry are supporting prototype work across four australian states. with a global market demand for highly capable but extremely affordable unmanned aircraft, boeing applied company-wide innovation to achieve those goals. the aircraft was engineered using a digital twin to model its structures, systems, capabilities and full life-cycle requirements; manufactured with boeing’s largest-ever resin-infused single composite piece; and assembled using proven advanced manufacturing processes. 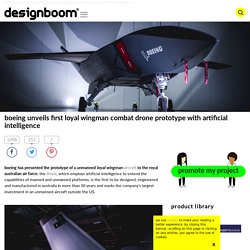 China's Airborne Laser Weapon Would Change Dogfighting Forever. Xinhua News AgencyGetty Images The Chinese military put out notice it wants airborne laser pods.The pods could be used offensively or defensively, against aircraft or even missiles.Airborne lasers, moving at light speed, could end dogfighting as we know it. 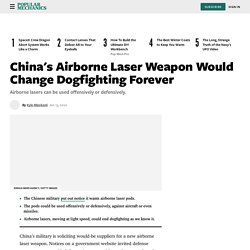 China’s military is soliciting would-be suppliers for a new airborne laser weapon. Notices on a government website invited defense contractors to provide information on an airborne laser attack pod. What Does the US Military Need For A War In Space? It’s Hard to Say. The plans for war above the atmosphere remain so tightly classified that industry can’t start building the things that will be needed. 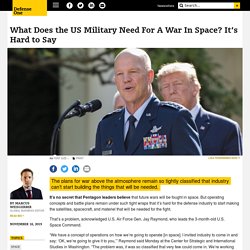 It’s no secret that Pentagon leaders believe that future wars will be fought in space. But operating concepts and battle plans remain under such tight wraps that it’s hard for the defense industry to start making the satellites, spacecraft, and materiel that will be needed for the fight. That’s a problem, acknowledged U.S. Air Force Gen. The U.S. Air Force Plans to 'Grow' Runways with Bacteria. The U.S. Navy Wants To Build a “Ghost Fleet” of Drone Warships. This Crazy Ad for an Israeli Future Tank Is Something Else. The Pentagon Is Reviving Cold War “Assault Breaker” Concept to Thwart China, Russia.

U.S. Navy to release genetically engineered organisms into the ocean, unleashing mass genetic pollution with devastating consequences. Defenseone. Hostilities in the Sea of Azov are heating up, and the U.S. is increasing its involvement. 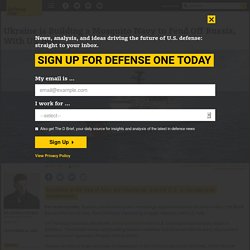 For some months, Russian vessels have grown increasingly aggressive toward Ukrainian ships in the Black Sea and the Sea of Azov. Now Ukraine is marshalling a bigger response, with U.S. help. On Thursday, Ukrainian officials will take possession of two U.S. Coast Guard Island-class cutters in Baltimore. The transfer comes amid budding maritime hostilities that Ukrainian officials worry may herald a second wave of aggressive Russian military action.

Russia maintains a large naval base in Sevastopol on the Ukrainian peninsula of Crimea, which Moscow illegally seized in 2014. “Experts in Ukraine say this could be the next [Russian] operation from this flank, from the sea, near Mariupol,” Valeriy Chaly, Ukraine’s ambassador to the U.S., said in an August interview at the Ukrainian embassy. Subscribe Receive daily email updates: Subscribe to the Defense One daily. The US Military’s Drone Swarm Strategy Just Passed a Key Test. The U.S. Navy Could Have Had a Submarine Aircraft Carrier. The SLAM Missile Would Have Been a Flying Chernobyl. This story originally appeared on Sept. 7, 2014. 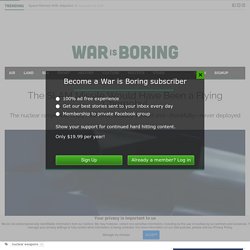 It was the perfect airborne death machine—a supersonic drone of nearly unlimited range, loaded with hydrogen bombs zooming around Earth at more than 2,500 miles per hour. To the engineers who worked on its development, it was “technically sweet” and the high point of their careers. Developed between 1957 and 1964, the Supersonic Low Altitude Missile was one of the craziest, deadliest nuclear weapons systems ever pursued. The locomotive-sized cruise missile would loiter at high altitudes above the Soviet Union, before dropping down to treetop level and roaring across enemy territory at Mach 3. Then it would lob nuclear bombs at everything in its path. Were it ever completed, the missile likely would have worked. Untitled. Australia developing personal black box "flight recorder" for soldiers.

Australia is looking into equipping soldiers with a personal "black box" that would act as a combination data recorder and emergency beacon. 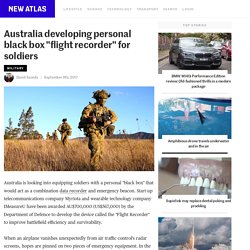 James Mattis Quotes - The Monks of War, a James Mattis Biography. This article originally appeared in the March 2006 issue. 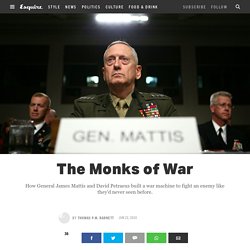 The Hidden Costs of America's Addiction to Mercenaries. A decade ago, I found myself in a precarious position. 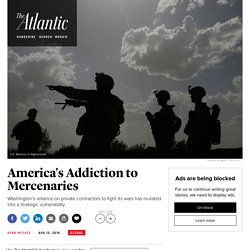 I was in Burundi, sipping a Coke with Domitien Ndayizeye, the country’s then-president, U.S. Ambassador Jim Yellin, and several others. We had an emerging catastrophe on our hands. The Air Force Is Developing a Drone Fighter Bomber. The U.S. 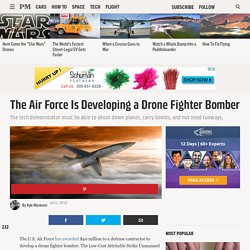 Air Force has awarded $40 million to a defense contractor to develop a drone fighter bomber. The Low-Cost Attritable Strike Unmanned Aerial System Demonstration (LCASD) will be a technology demonstrator that will take drone warfare to the next level—air-to-air warfare. The Air Force Research Lab awarded the contract to Kratos Defense, a San Diego-based defense contractor that specializes in drones used for target practice by the U.S. military. The contract specifies a drone capable of low-altitude "nap of the earth" flying, high-altitude cruise, defensive counter-air maneuvers, offensive counter-air maneuvers, and suppression and destruction of enemy air defenses. Advertisement - Continue Reading Below The drone will be capable of Mach 0.9 speeds for short periods of time, have a 1,500 nautical mile range, and be able to carry at least two GBU-39 small diameter bombs.

Current drones are are limited to intelligence/surveillance/reconnaissance and strike duties. BAE Systems wants to grow military aircraft in chemical vats. Modern military aircraft are so complex that fighters like the F-35 Lightning II or the Typhoon take 20 years to go from drawing board to deployment at phenomenal costs. With design work already starting on next-generation fighters for the 2040s, BAE Systems and the University of Glasgow are looking at a faster, cheaper way to produce unmanned air vehicles (UAV), where they aren't constructed, but grown in computer-controlled chemical vats in a matter weeks. This vision of the future of aircraft design and manufacturing was outlined ahead of the upcoming Farnborough International Airshow, which runs from July 11 to 17. The purpose of this concept isn't just to cut cost and the painfully long development cycle of military aviation hardware.

First Earth Battalion. The First Earth Battalion was the name proposed by Lieutenant Colonel Jim Channon, a U.S. soldier who had served in Vietnam, for his idea of a new military of supersoldiers to be organized along New Age lines. A book of the same name was published in 1982. The Men Who Stare at Goats[edit] Beliefs[edit] Warrior Monk[edit] Channon adopted the term "warrior monk" for potential members of the First Earth Battalion.[6] Credo[edit] Field manual. What a U.S.-Russian War in Syria Would Look Like. The Med is crowded with warships. The United States has four Arleigh Burke-class guided-missile destroyers off the Syrian coast, and part of their job is to shadow Russian warships. They've followed miles behind as the Moskva creeps along the coastline, north of their new airbase in Latakia. And when the pair of SAMs rise from the Moskva, the crew on the bridge knows this war has entered a new, scary phase. They go into combat alert and radio to their base in Rota, Spain.

Weapons That Could Change Geophysical Landscape, Human DNA to Appear Soon. Military & Intelligence Get short URL Future weapons will be based on energy, electromagnetic, radiological, geophysical and genetic principles. Lockheed Martin unveils potential U-2 Successor. 6 Facts About the Future of the Air Force. Does Our Military Know Something We Don't About Global Warming?

A plane has been in space for 600 days, and no one knows why. The Pentagon Wants a Computer That Can Teach Itself. Why the U.S. Military Is Into Bee Brain Surgery - Issue 11: Light. Female Interrogators Want You To Stop Hitting On Them. Sierra Vista, AZ – From dealing with uncooperative detainees during interrogation to piecing together critical intelligence, military interrogators have experienced it all.

Women Pass Marine Training, Clear First Hurdle To Combat Role. Here's what you need ... a Laser Gatling Gun. The Laser Gatling Gun features six burning lasers, and one aiming beam. Pentagon Funding Memory Erasing Pills. Neuroscience, Special Forces, and Ethics at Yale. We must wake up to the threats of new chemical weapons - opinion - 15 April 2013. Why Sticks and Stones Will Beat Our Drones - By Rosa Brooks. "I know not with what weapons World War III will be fought," Albert Einstein warned President Truman, "but World War IV will be fought with sticks and stones.