The development of 'art house' gaming with particular emphasis on the impact of 'Dear Esther' (Annotated) Untitled. This curation has been shared with the gaming field. Please consider as a research resource and comment on its usefulness on Twitter on the link below. Art game. Playing Video Games (Annotated) We Want to Know Why You Play Games - Xbox Wire (Annotated) Why Do You Play Video Games? Why do people enjoy playing video games? How is it fun and enjoyable? - Quora. 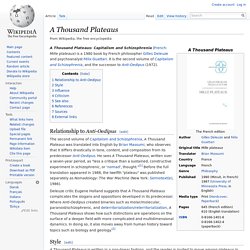 It is the second volume of Capitalism and Schizophrenia, and the successor to Anti-Oedipus (1972). Relationship to Anti-Oedipus[edit] Deleuze critic Eugene Holland suggests that A Thousand Plateaus complicates the slogans and oppositions developed in its predecessor. Where Anti-Oedipus created binaries such as molar/molecular, paranoid/schizophrenic, and deterritorialization/reterritorialization, A Thousand Plateaus shows how such distinctions are operations on the surface of a deeper field with more complicated and multidimensional dynamics. In doing so, it also moves away from human history toward topics such as biology and geology.[2] Style[edit] Influence[edit] Criticism[edit] Physicists Alan Sokal and Jean Bricmont claim that A Thousand Plateaus contains many passages that use pseudo-scientific language.[10] See also[edit]

The Deleuze and Guattari Dictionary by Eugene B. Young. Post-Structuralism in Video Games. Bernard Tschumi’s Architecture and Disjunction is a collection of his essays on post-structuralism. 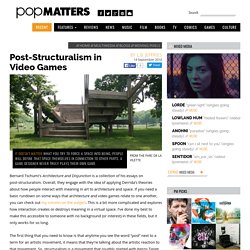 Overall, they engage with the idea of applying Derrida’s theories about how people interact with meaning in art to architecture and space. If you need a basic rundown on some ways that architecture and video games relate to one another, you can check out my column on the subject. This is a bit more complicated and explores how interaction creates or destroys meaning in a virtual space. I’ve done my best to make this accessible to someone with no background (or interest) in these fields, but it only works for so long.

The first thing that you need to know is that anytime you see the word “post” next to a term for an artistic movement, it means that they’re talking about the artistic reaction to that movement. Tschumi argues that it doesn’t matter what you try to force a space into being, people will define that space themselves in connection to other parts. L.B. The Gift (book) - Wikipedia (Annotated) Mauss's essay focuses on the way that the exchange of objects between groups builds relationships between humans. 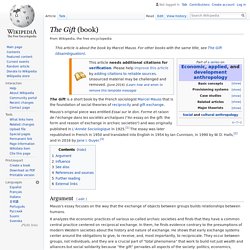 The Gift has been very influential in anthropology, where there is a large field of study devoted to reciprocity and exchange. It has also influenced philosophers, artists, and political activists, including Georges Bataille, Jacques Derrida, Jean Baudrillard, and more recently the work of David Graeber and the British theologian John Milbank. Homo ludens johan huizinga routledge 1949. Homo Ludens - Wikipedia (Annotated) Homo Ludens is a book written in 1938 by Dutch historian and cultural theorist Johan Huizinga.[1] It discusses the importance of the play element of culture and society. 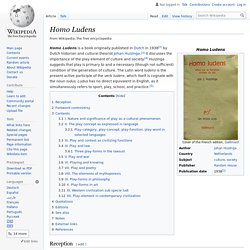 Huizinga suggests that play is primary to and a necessary (though not sufficient) condition of the generation of culture. The Latin word Ludens is derived from ludus. Ludus has no synonym in English, as it simultaneously refers to sport, play, school, and practice.[2] Reception[edit] Foreword controversy[edit] The Origin of Consciousness in the Breakdown of the Bicameral Mind by Julian Jaynes. Bicameralism (psychology) - Wikipedia. Jaynes uses governmental bicameralism as a metaphor to describe a mental state in which the experiences and memories of the right hemisphere of the brain are transmitted to the left hemisphere via auditory hallucinations. 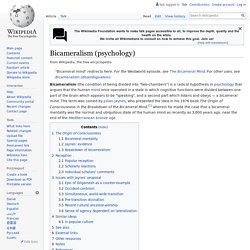 The metaphor is based on the idea of lateralization of brain function although each half of a normal human brain is constantly communicating with the other through the corpus callosum. The metaphor is not meant to imply that the two halves of the bicameral brain were "cut off" from each other but that the bicameral mind was experienced as a different, non-conscious mental schema wherein volition in the face of novel stimuli was mediated through a linguistic control mechanism and experienced as auditory verbal hallucination.

Bicameral mentality would be non-conscious in its inability to reason and articulate about mental contents through meta-reflection, reacting without explicitly realizing and without the meta-reflective ability to give an account of why one did so. The Person: A New Introduction to Personality Psychology by Dan P. McAdams. Dan P. McAdams - Wikipedia (Annotated) Dan P. 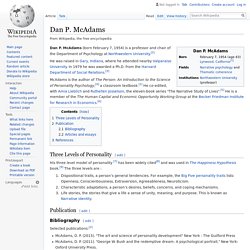 McAdams (born February 7, 1954) is a professor and chair of the Department of Psychology at Northwestern University.[2] He was raised in Gary, Indiana, where he attended nearby Valparaiso University. Galloway ar gaming essays on algorithmic culture (See Note) Galloway Gaming Essays. Game studies. Game studies or gaming theory is a discipline that deals with the critical study of games. 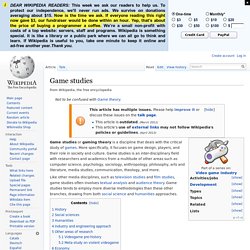 More specifically, it focuses on game design, players, and their role in society and culture. Game studies is an inter-disciplinary field with researchers and academics from a multitude of other areas such as computer science, psychology, sociology, anthropology, philosophy, arts and literature, media studies, communication, theology, and more. Like other media disciplines, such as television studies and film studies, game studies often involves textual analysis and audience theory. Game studies tends to employ more diverse methodologies than these other branches, drawing from both social science and humanities approaches. History[edit] Prior to the late-twentieth century, the academic study of games was rare and limited to fields such as history and anthropology. 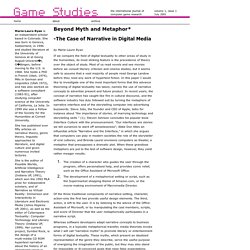 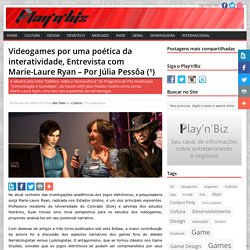 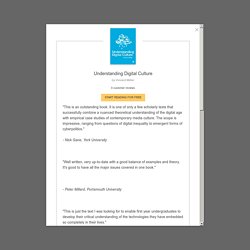 It is one of only a few scholarly texts that successfully combine a nuanced theoretical understanding of the digital age with empirical case studies of contemporary media culture. The scope is impressive, ranging from questions of digital inequality to emergent forms of cyberpolitics. " - Nick Gane, York University "Well written, very up-to-date with a good balance of examples and theory. It's good to have all the major issues covered in one book. " - Peter Millard, Portsmouth University. Literature in the Digital Age: A Critical I... - Kindle. Curation Nation: How to Win in a World Wher... - Kindle. Business Leaders Are Buzzing About Curation Nation “An indispensible guide to the brave new media world.”

—Arianna Huffington, editor in chief, the Huffington Post “Gives me hope for the future of the Information Age. Rosenbaum argues for the growing importance of people—creative, smart, hip—who can spot trends, find patterns, and make meaning out of the flood of data that threatens to overwhelm us.” —Daniel H. Avatars Of Story (Electronic Mediations) - Kindle. Since its inception, narratology has developed primarily as an investigation of literary narrative fiction. Linguists, folklorists, psychologists, and sociologists have expanded the inquiry toward oral storytelling, but narratology remains primarily concerned with language-supported stories. In Avatars of Story, Marie-Laure Ryan moves beyond literary works to examine other media, especially electronic narrative forms. By grappling with semiotic media other than language and technology other than print, she reveals how story, a form of meaning that transcends cultures and media, achieves diversity by presenting itself under multiple avatars.

The Rise of the Robots: Technology and the Threat of Mass Unemployment by Martin Ford. The Industries of the Future by Alec J. Ross. Unique copy of first full-length audio book found in Canada. A unique copy of the first full-length audio book ever made, a set of four LPs recorded in 1935 with the full text of Joseph Conrad’s 1902 novella Typhoon, has been rediscovered in Canada.

The hunt continues for surviving copies of more of the earliest titles, including The Gospel According to St John, and Agatha Christie’s The Murder of Roger Ackroyd. Selecting the books caused controversy at the time, with many blind readers complaining of censorship, and that books judged good for them were being selected instead of the kind of books sighted people were reading. Many titles were rejected for passages of sex, violence or profanity, or judged obscene – including classics like Muriel Spark’s The Prime of Miss Jean Brodie. The Royal National Institute of Blind People, which now has a library of 25,000 titles available as digital downloads rather than the heavy fragile shellac records of the 1930s, began creating audio books in 1935. World’s first audiobook tells its tale again. The World's First 'Literary' Audiobook Was Just Discovered, And It's Way Older Than You Think It Is. Some of my earliest memories involve listening to Disney Read-Alongs, with their signature slogan: "When you hear this sound — turn the page!

" I've just learned that an audiobook from 1935 has been discovered in Canada, and now my whole concept of books-on-tape history has been thrown for a loop. The book in question is Joseph Conrad's novella, Typhoon. Mike Dececco, a Canadian collector of vinyl records, knew the 4-LP set was a find, given its age, but he did not understand the significance of the 1935 audiobook until he read The Untold Story of the Talking Book: a microhistory by Queen Mary University of London professor Matthew Rubery. Audiobooks have been around since the 1930s, when the U.K.'s Royal National Institute of Blind People (RNIB) began to record them. As for how the 1935 audiobook wound up across the pond, The Guardian reports that "it is believed [to] have been taken to Canada by a former armed forces member.

The first branching path gamebook c1945 "Treasure Hunt: a maze in volume form" by Alan George @GianFaye #cyoa. Gamebook - Wikipedia. Dungeons & Dragons. Myst - Wikipedia. Not to be confused with mist. EverQuest - Game Overview. Fable (video game) - Wikipedia. British Go Association. Go is one of the oldest board games in the world. Its true origins are unknown, though it almost certainly originated in China some 3,000-4,000 years ago.