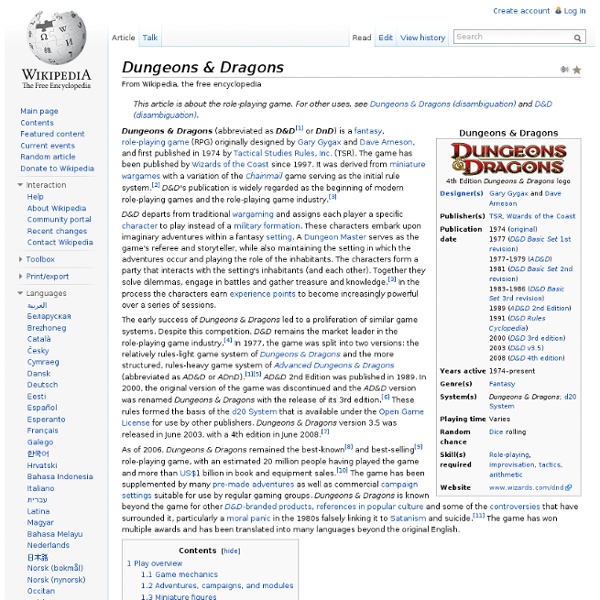 The early success of Dungeons & Dragons led to a proliferation of similar game systems. Despite this competition, D&D remains the market leader in the role-playing game industry.[5] In 1977, the game was split into two branches: the relatively rules-light game system of Dungeons & Dragons and the more structured, rules-heavy game system of Advanced Dungeons & Dragons (abbreviated as AD&D or ADnD).[1][2][6] AD&D 2nd Edition was published in 1989. In 2000, the original line of the game was discontinued and the AD&D version was renamed Dungeons & Dragons with the release of its 3rd edition with a new system. These rules formed the basis of the d20 System which is available under the Open Game License for use by other publishers. Play overview[edit] A D&D game session in progress Release 3.5 of the three core rulebooks The most recent versions of the game's rules are detailed in three core rulebooks: The Player's Handbook, the Dungeon Master's Guide and the Monster Manual. Game history[edit]

of the Coast Official Home Page Search © 1995-2014 Wizards of the Coast LLC, a subsidiary of Hasbro, Inc. All Rights Reserved. Gary Gygax Ernest Gary Gygax (/ˈɡaɪɡæks/ GY-gaks; July 27, 1938 – March 4, 2008)[2] was an American writer and game designer best known for co-creating the pioneering role-playing game Dungeons & Dragons (D&D) with Dave Arneson. Gygax has been described as the father of D&D.[3] After leaving TSR in 1985 over issues with its new majority owner, Gygax continued to create role-playing game titles independently, beginning with the multi-genre Dangerous Journeys in 1992. Gygax was married twice and had six children. Early life and inspiration[edit] Gary Gygax was born in Chicago within a few blocks of Wrigley Field[4] on July 27, 1938. During his childhood and teen years, he developed a love of games and an appreciation for fantasy and science fiction literature. Wargames[edit] I'm very fond of the Medieval period, the Dark Ages in particular. TSR[edit] In 1975, Gygax and Kaye were only 36 years old, and Kaye had not made any specific provision in his will regarding his one-third share of the company.

dnd35 « Dingles Games Warning: Cannot modify header information - headers already sent by (output started at /usr/share/wordpress2.7/wp-content/themes/dinglesgames/toolHeader.php:108) in /usr/share/wordpress2.7/wp-content/themes/dinglesgames/library/ddgettreas.php on line 7 Welcome to Dingle's Games free treasure generator for D&D 3.5. Leave a Reply You must be logged in to post a comment. This tool is for DMs who are tired of spending an hour generating treasue only to see their players just cash it all in for gold. Using this treasure generator, a DM can create upto a 20CR Treasure hoared in a few seconds. Once you have selected a CR press the CALCLATE button to create to create the treasure. The treasure generator is free to use and supplied "as is". Dave Arneson David Lance "Dave" Arneson (October 1, 1947[2] – April 7, 2009) was an American game designer best known for co-developing the first published role-playing game (RPG), Dungeons & Dragons, with Gary Gygax, in the early 1970s.[3] Arneson's early work was fundamental to the development of the genre, developing the concept of the RPG using devices now considered to be archetypical, such as adventuring in "dungeons", using a neutral judge, and having conversations with imaginary characters to develop the storyline.[4] Arneson discovered wargaming as a teenager in the 1960s, and began combining these games with the concept of role-playing. He was a University of Minnesota student when he met Gygax at the Gen Con gaming convention in the late 1960s. In 1970 Arneson created the game and fictional world that became Blackmoor, writing his own rules and basing the setting on medieval fantasy elements. Arneson left TSR in 1976, and filed suit in 1979 to retain credits and royalties on the game.

dinglesgames Dungeons & Dragons (1974) The original Dungeons & Dragons (commonly abbreviated D&D) boxed set by Gary Gygax and Dave Arneson was published by TSR, Inc. in 1974. It initially included the original edition of the Dungeons & Dragons fantasy role-playing game. Its product designation was TSR 2002. The set also included brief guidelines on using monsters as player characters.[2] This small box set contains three 5 1/2" x 8 1/2" booklets:[3] Volume 1: Men & Magic, Volume 2: Monsters & Treasure, and Volume 3: Underworld & Wilderness Adventures.[4] Under the "Dungeons & Dragons" heading on the cover reads, Rules for Fantastic Medieval Wargames Campaigns Playable with Paper and Pencil and Miniature Figures. The Men & Magic booklet recommends using miniatures only "if the players have them available and so desire", although they were not required and cardboard counters were given as an alternative.[4] The set initially referred to some of the creatures in the game as "hobbits" and "ents" after J.

The Hypertext d20 SRD (v3.5 d20 System Reference Document) 12 Useful Websites to Improve Your Writing by Johnny Webber 1. Words-to-Use.com – A different kind of thesaurus. 2. OneLook.com – One quick dictionary search tool. 3. 4. 5. 750words.com – Write three new pages every day. 6. 7. 8. 9. 10. 11. 12. Light of Aurifar - Feat - DND Toolshop Feb. 23, 2014 Hi guys, one of our staff managed to create an android application! The app comes with SRD only (can't put copyrighted stuff on Play), but there is option to download whole dndtools.eu database. First, open the app, click on Setting and select Upgrade Database: Then, paste this link: to the window and press Accept: That's all! Please, do leave him some feedback, like, etc! Tgg Jan. 17, 2014 Over the past year, we have seen significant changes to our site. Things to come… Domains & DeitiesWe are currently in the process of updating our Domains and Deities. Races & MonstersWhile we currently have a some information on the site, we are planning on improving these entries. Mundane/Alchemical ItemsThis is currently in the development phase as we look to expand upon the items sections. Additional Items… This list represents all the entries we want to eventually implement. Did we miss something? Our Mission… Seeking Help Thanks,tgg