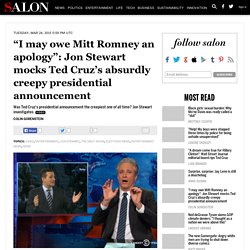 “I may owe Mitt Romney an apology,” Jon Stewart said on Monday’s “Daily Show,” after learning that Cruz and his wife actually practiced waving and kissing before the announcement. “Even the Mitt Romneytron 3000 didn’t have to rehearse waving and kissing,” he continued. If you were wondering why so many of the students in the audience looked bored out of their minds (and why one girl was even wearing a Rand t-shirt): It’s because the conservative Christian university required students to attend the Ted Cruz announcement as part of their weekly convocation. Sally Yates Just Opened A Can Of Constitutional Whoop Ass On Ted Cruz (VIDEO) During testimony in front of the Senate Intelligence Committee on Monday, former acting Attorney General Sally Yates revealed that she warned Trump administration officials three times about former National Security Adviser Michael Flynn. 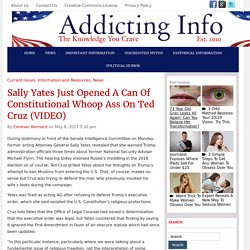 The hearing today involved Russia’s meddling in the 2016 election so of course, Ted Cruz grilled Yates about her thoughts on Trump’s attempt to ban Muslims from entering the U.S. That, of course, makes no sense but Cruz was trying to defend the man who previously insulted his wife’s looks during the campaign. Ted Cruz Tries to Justify Trump Endorsement to a Furious Glenn Beck. Ouch: Watch as Ted Cruz accidentally elbows his wife in the face after leaving presidential race. 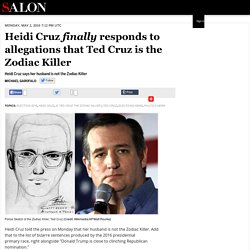 Add that to the list of bizarre sentences produced by the 2016 presidential primary race, right alongside “Donald Trump is close to clinching Republican nomination.” On Monday Yahoo News asked Heidi Cruz to comment on jokes that her husband is the infamous unapprehended Bay Area serial killer. “Well, I’ve been married to him for 15 years, and I know pretty well who he is, so it doesn’t bother me at all. The Best Reporting on Ted Cruz Through the Years. Ted Cruz rode a Tea Party wave to the Senate in 2012 after five years as Texas’ solicitor general. 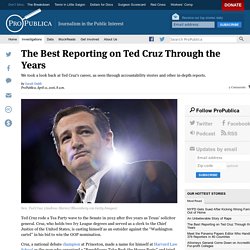 Cruz, who holds two Ivy League degrees and served as a clerk to the Chief Justice of the United States, is casting himself as an outsider against the “Washington cartel” in his bid to win the GOP nomination. Cruz, a national debate champion at Princeton, made a name for himself at Harvard Law School as the man who organized a “Republicans Take Back the House Party” and tried to learn tennis to improve his chances of getting a clerkship with Chief Justice William Rehnquist. While Cruz landed the coveted job, he never quite mastered the game. In 1998, Cruz served as the lawyer for Rep. John Boehner, the Ohio Republican who at the time was chairman of the House Republican Conference. 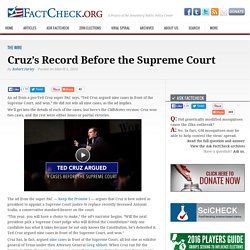 He did not win all nine cases, as the ad implies. We’ll get into the details of each of the cases, but here’s the CliffsNotes version: Cruz won two cases, and the rest were either losses or partial victories. The ad from the super PAC — Keep the Promise I — argues that Cruz is best suited as president to appoint a Supreme Court justice to replace recently deceased Antonin Scalia, a conservative standard-bearer on the court. “This year, you will have a choice to make,” the ad’s narrator begins. “Will the next president pick a Supreme Court judge who will defend the Constitution?

Cruz has, in fact, argued nine cases in front of the Supreme Court, all but one as solicitor general of Texas under then Attorney General Greg Abbott. “There was a degree of serendipity in that, but there was also a concerted effort to seek out and lead conservative fights,” Cruz told the Tribune. Everybody Hates Ted. Indeed indeed, I cannot tell, / Though I ponder on it well, / Which were easier to state, / All my love or all my hate. 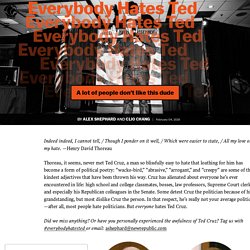 —Henry David Thoreau Thoreau, it seems, never met Ted Cruz, a man so blissfully easy to hate that loathing for him has become a form of political poetry: “wacko-bird,” “abrasive,” “arrogant,” and “creepy” are some of the kindest adjectives that have been thrown his way. Cruz has alienated about everyone he’s ever encountered in life: high school and college classmates, bosses, law professors, Supreme Court clerks, and especially his Republican colleagues in the Senate. Some detest Cruz the politician because of his grandstanding, but most dislike Cruz the person. ‘Here am I Lord, use me’: Ted Cruz’s dad says Holy Ghost authorized White House run. Don't miss stories. 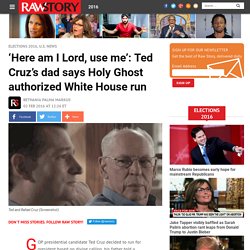 Follow Raw Story! An Iowa Voter Forced Ted Cruz To Confront The Human Toll Of Repealing Obamacare. No compassion: This amazing Ted Cruz video proves that “compassionate conservatism” is truly dead. If you’re left of center (and if you’re reading Salon, I think it’s fair to guess that you are) you won’t want to do what I’m about to ask of you — but stick with me and do it anyway. 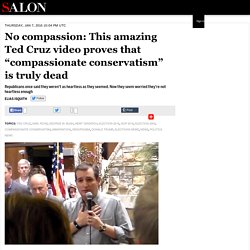 Take your mind back to the halcyon days of American Empire, when the economy was humming, wages were growing, crime was dropping, and the nation was at peace. It was a time before Facebook, before Twitter; before iPods and iPhones and Chrome and Google Glass. It was a time when you were still supposed to like Bill Cosby; a time when a reference to “nine-eleven” presumably meant someone was trying to call an ambulance or the cops.

Yes, I’m asking you to return in your mind to the year 2000, when life — for many Americans, at least — was better, politics was nicer, and everyone was coming to terms with the fact that the new Star Wars movie sucked. Ted Cruz. Ted Cruz? Ted Cruz! I still have many doubts about Ted Cruz’s ability to win the Republican nomination. 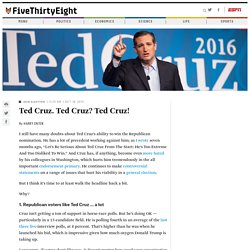 He has a lot of precedent working against him; as I wrote seven months ago, “Let’s Be Serious About Ted Cruz From The Start: He’s Too Extreme And Too Disliked To Win.” And Cruz has, if anything, become even more hated by his colleagues in Washington, which hurts him tremendously in the all important endorsement primary. He continues to make controversial statements on a range of issues that hurt his viability in a general election.

Ellen Page confronts Ted Cruz about anti-LGBTQ bigotry — and Cruz’s response is predictably absurd. Texas Senator and GOP presidential candidate Ted Cruz was interrupted from his very important grilling duties at the Iowa State Fair by someone he clearly didn’t recognize as Oscar-nominated actress Ellen Page, who asked him questions about what constitutes “persecution” in America today. 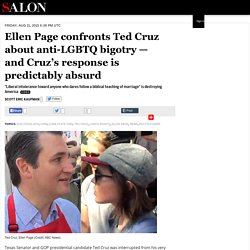 Page began by asking how he felt about “LGBTQ people being fired for being gay or trans,” and Cruz responded that “what we’re really seeing now is Bible-believing Christians being persecuted.” “Yes,” Page replied, “for discriminating against gay and lesbian people.” “No,” Cruz said, “for living according to their faith.” He proceeded to rattle off the woeful tale of Dick and Betty Odgaard, who were fined for refusing to allow a same-sex couple to host their wedding in couple’s church/bistro/flower shop/wedding venue. Megyn Kelly schools Ted Cruz on plan to rewrite the Constitution to punish Supreme Court.

Megyn Kelly grilled Sen. Ted Cruz (R-TX) on his plan to rewrite the Constitution to remove U.S. Supreme Court justices who ruled in favor of Obamacare and marriage equality. Cruz, a Republican presidential candidate, described the same-sex marriage ruling as “one of the darkest days in our nation’s history,” and he proposed a constitutional amendment that would require Supreme Court justices to face re-election every eight years. Kelly said dismissively that the majority had “found a constitutional right” to marriage, but she confronted Cruz over his plan, reported Mediaite. “Alexander Hamilton (wrote), ‘The complete independence of the courts is peculiarly essential in a limited constitution,’” Kelly reminded the strict constitutionalist senator.

Cruz said last week’s decisions were simply “the latest in a long line and, sadly, were the nadir of the Supreme Court,” and he quoted talking points from Justice Antonin Scalia’s dissent in Obergefell v. Ted Cruz goes berserk over SCOTUS rulings: “Some of the darkest 24 hours in our nation’s history” Ted Cruz Wants To Be Able To Vote Out Supreme Court Justices. After calling the last day "some of the darkest 24 hours in our nation's history," Sen. Ted Cruz (R-Texas) is now calling for Supreme Court justices to face elections.

In a National Review op-ed published Friday, Cruz chastised the high court for its decisions to reject a major challenge to Obamacare and to legalize same-sex marriage nationwide. Ted Cruz’s rainy day socialism: How a right-wing fanatic learned to stop worrying and love redistribution. For the first time ever, I agree with Sen. Ted Cruz, R-Tex., and Gov. Greg Abbott, R-Tex.. Specifically, as deadly floods drown parts of Texas, I absolutely agree that President Obama and the Federal Emergency Management Agency (FEMA) ought to spend taxpayer funds redistributed from citizens in other states, including from leftists in Massachusetts, New York and California, to help with flooding relief in Cruz and Abbott’s sovereign state of Texas. Indeed, many of us generally agree that when the chips are down, it’s important to have (what’s that phrase?) A safety net, in case a particular crisis is seemingly insurmountable.

Ted Cruz: I Won Those Purple Hearts! Why does Hillary Clinton - the best-known female politician in the world - feel a need to constantly reintroduce herself to the American people? Ana Marie Cox makes the case for authenticity over artifice. The biggest problem with the premiere video out of Hillary Clinton’s Brooklyn campaign headquarters isn’t the video itself. Yes, Clinton is benignly stiff; yes, the people-on-the-street interactions are credulously gushy and earnest.

This is a defiantly non-hipster version of Brooklyn, complete with stroller cameos and an enthusiastic ethnic cabbie: “I tell everybody in my car to vote for Hillary Clinton!” He exclaims, suggesting that maybe there is a form of advertising more annoying than the auto-play mini-televisions in the back of New York taxis. No, the problem with the video is that it’s introduced as, “How do Brooklyn residents feel about their new neighbor?” Jon Stewart Plays 'Let's Get Rid Of Ted Cruz' Jon Stewart spent much of Tuesday night's "Daily Show" going after GOP presidential candidates that he believes couldn't possibly win the nomination, including Carly Fiorina, Ben Carlson and Mike Huckabee. But he devoted an entire segment of the program to one candidate in particular that he says needs to get the boot now. "There are so many hopefuls in the Republican race, we've got to start narrowing the field," Stewart said. Ted Cruz goes ballistic over “radical” idea that gay people should enjoy equality.

As I’ve written previously, Ted Cruz has cemented his status as the most rabidly anti-gay contender for the Republican Party’s 2016 presidential nomination, claiming the hallowed ground once occupied by the likes of Rick “Man on Dog” Santorum. From condemning a non-discrimination ordinance in his hometown of Houston to crusading against marriage equality, Cruz has brought the full weight of his trademark demagoguery to bear in his valiant effort to ensure that gay people remain second-class citizens in this country. Naturally, then, he applauded the passage of an Indiana law that provides a legal shield to businesses and individuals who refuse services to gays.

Given that this is Ted Cruz we’re discussing, the Texas senator also vociferously fulminated against opponents of the measure, depicting them, like all who oppose Cruz’s political agenda, as loathers of liberty and threats to the republic. Other stories recommended for you. Cruz: More differences than similarities with Obama. Ted Cruz’s “experience” charade: Starting political fires isn’t much of an accomplishment. Why Ted Cruz Is Such a Long Shot. Lewis Black: Not even taking LSD in my youth could prepare me for Ted Cruz.