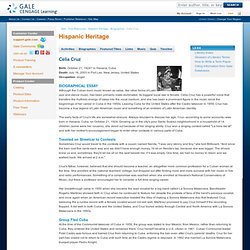 In Havana, Cuba Death: July 16, 2003 in Fort Lee, New Jersey, United States Occupation: singer Although the Cuban-born music known as salsa, like other forms of Latin jazz and dance music, has been primarily male-dominated, its biggest vocal star is female. Celia Cruz has a powerful voice that transfers the rhythmic energy of salsa into the vocal medium, and she has been a prominent figure in the music since the beginnings of her career in Cuba in the 1950s. Leaving Cuba for the United States after the Castro takeover in 1959, Cruz has become a true legend of Latin American music and something of an emblem of Latin American identity.

The early facts of Cruz's life are somewhat obscure. Traveled on Streetcar to Contests Sometimes Cruz would travel to the contests with a cousin named Nenita. Cruz's father, however, believed that she should become a teacher, an altogether more common profession for a Cuban woman at the time. Group Fled Cuba Recorded for Fania Label. Celia Cruz Biography. Celia Cruz was a Cuban-American singer, best known as one of the most popular salsa performers of all time, recording 23 gold albums. 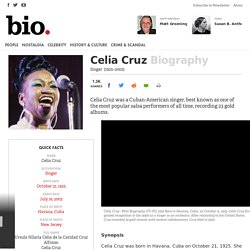 Synopsis Celia Cruz was born in Havana, Cuba on October 21, 1925. She first gained recognition in the 1950s, as a singer with the orchestra Sonora Matancera. Relocating to the United States after the ascent of Fidel Castro, Cruz recorded 23 gold records with Tito Puente, the Fania All-Stars and other collaborators. Cruz died in New Jersey in 2003, at the age of 77. Early Years Celia Cruz grew up in the poor Havana neighborhood of Santos Suárez, where Cuba's diverse musical climate became a growing influence. Rising Musical Career Cruz enrolled at the National Teachers’ College, but dropped out soon after, since her live and radio performances around were gaining acclaim. Cruz’s first recordings were made in 1948. Commercial Success Death and Legacy. Celia Cruz. She spent much of her career working in the United States and several Latin American countries. 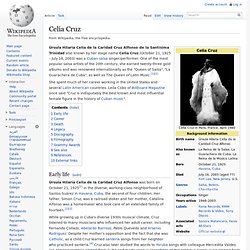 Leila Cobo of Billboard Magazine once said "Cruz is indisputably the best known and most influential female figure in the history of Cuban music". Early life[edit] Úrsula Hilaria Celia de la Caridad Cruz Alfonso was born on October 21, 1925[2] in the diverse, working-class neighborhood of Santos Suárez in Havana, Cuba, the second of four children. Her father, Simon Cruz, was a railroad stoker and her mother, Catalina Alfonso was a homemaker who took care of an extended family of fourteen.[2][3] While growing up in Cuba's diverse 1930s musical climate, Cruz listened to many musicians who influenced her adult career, including Fernando Collazo, Abelardo Barroso, Pablo Quevedo and Arsenio Rodríguez. As a teenager, her aunt took her and her cousin to cabarets to sing, but her father encouraged her to attend school in the hope she would become a teacher. Career[edit] Death[edit] Legacy[edit] 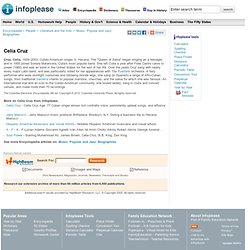 Havana. The "Queen of Salsa" began singing as a teenager, and in 1950 joined Sonora Matancera, Cuba's most popular band. She left Cuba a year after Fidel Castro came to power (1960) and was an exile in the United States for the rest of her life. Over the years Cruz sang with nearly every major Latin band, and was particularly noted for her appearances with Tito Puente's orchestra. A fiery performer who wore skintight costumes and billowing blonde wigs, she sang (in Spanish) a range of Afro-Cuban songs, from traditional Santería chants to popular mambos, cha-chas, and the salsa for which she was famous. The Columbia Electronic Encyclopedia, 6th ed. More on Celia Cruz from Infoplease: Celia Cruz - Celia Cruz Age: 77 Cuban singer whose rich contralto voice, persistently upbeat songs, and effusive ...Jerry Masucci - Jerry Masucci music producer Birthplace: Brooklyn, N.Y. See more Encyclopedia articles on: Music: Popular and Jazz: Biographies.