Surfer. The best quotes by Miki Dora. 05 January 2016 | Surfing The undisputed "King of Malibu," the ultimate hedonist, "The Black Knight," "Da Cat," and the "The Malibu Gypsy. 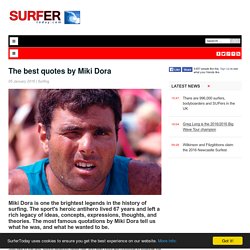 " Dora traveled the world and developed his fantasy planet. Just like in the arts, sports legends never die, and Miki Dora will continue to shadow the dark side of surfing. The commercialization of the sport, the homogenization of behaviors, styles and references were some of the issues Dora always fought. For many, he was the "angry young man of surfing. " If Dora could, he would buy surfing just for himself. "Da Cat" believed on the bright side of individualism; family, friends, acquaintances, girlfriends, business partners, and fellow surfers rarely interpreted well his emotional zigzags. Dora was a bit like Jim Morrison, and a bit like Jose Mourinho. His critics accuse him of being a surf bum, a vagabond, a sociopath and a criminal. Miki Dora Was an Awesome Asshole. Miki Dora was, in many ways, the figurehead of a movement. 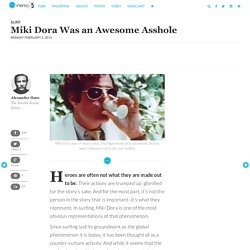 But he wasn’t always true to his own beliefs. Heroes are often not what they are made out to be. Their actions are trumped up; glorified for the story’s sake. And for the most part, it’s not the person in the story that is important–it’s what they represent. In surfing, Miki Dora is one of the most obvious representations of that phenomenon. Since surfing laid its groundwork as the global phenomenon it is today, it has been thought of as a counter-culture activity. The stories of surf are interesting ones–from the Duke’s exploits in the Olympics and Da Bull’s infamous wave to the Endless Summer and Andy Irons’s tragic passing, surfers, and people in general, are drawn to stories of paradise and the interesting characters that play the defining roles. #14 Miki Dora. Entries – Dora Mickey – Encyclopedia Of Surfing. Irresistible American surf rogue, originally from Hollywood, California; the light-footed master of Malibu during the 1950s and '60s, and surfing's definitive outlaw figure. 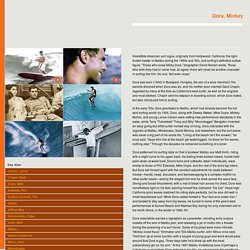 "Those who knew Micky Dora," biographer David Rensin wrote, "those who wish they had or never had, all agree: there will never be another character in surfing like him. No one. Not even close. " Dora was born (1934) in Budapest, Hungary, the son of a wine merchant. His parents divorced when Dora was six, and his mother soon married Gard Chapin, regarded by many at the time as California's best surfer, as well as the angriest and most disliked. Long Live Mickey Dora. Ava gardner frank sinatra photos. The Living Curl 60's Surf Film Trailer. A video by the supertones of "miki dora" surfing malibu. MALIBU SURFING Miki Dora. Miki "Da Cat" Dora. 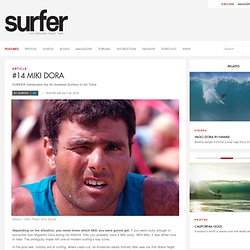 Photo: Ron Stoner Depending on the situation, you never knew which Miki you were gonna get. If you were lucky enough to encounter San Miguelito Dora during his lifetime, then you probably have a Miki story. In the post-war, military era of surfing, where clean-cut, all-American ideals thrived, Miki was our first Black Night. Miki always said that computers were the beginning of the end. Paranoia and loneliness followed Miki wherever he went. This is where I call bullshit. The masses that Miki ran from were also his reason for living. In the end, perhaps the Oscar he stole from a Hollywood party during the ’60s was deserved all along.

Miki, we love you. Previous #15 Martin Potter | Next #13 Rabbit Bartholomew. SPOT ON SPOT – A Revisionist Glance at Historic Surfing Locales: Malibu. Article | posted on July 22, 2010 AKA: Surfrider Beach, The ‘Bu. 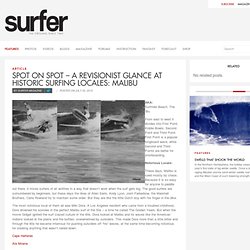 From east to west it divides into First Point, Kiddie Bowls, Second Point and Third Point. First Point is a popular longboard wave, while Second and Third Points are better for shortboarding. Notorious Locals: These days, Malibu is ruled mostly by chaos. The most notorious local of them all was Miki Dora. Cape Hatteras Ala Moana Huntington Pier. Mickey "Da Cat" Dora. Now in print. 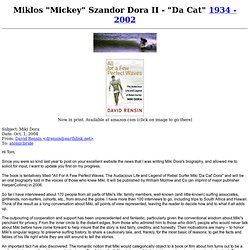 Available at amazon.com (click on image to go there) Subject: Miki Dora Date: Oct. 1, 2004 From: David Rensin <drensin@earthlink.net> To: atomicbride Hi Tom, Since you were so kind last year to post on your excellent website the news that I was writing Miki Dora's biography, and allowed me to solicit for input, I want to update you first on my progress.