Windsor Mann
@WindsorMann
The good thing about Ted Cruz is that no one will ever form a cult around his personality. 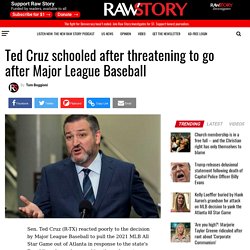 Ted Cruz (R-TX) reacted poorly to the decision by Major League Baseball to pull the 2021 MLB All Star Game out of Atlanta in response to the state's Republican lawmakers pushing through a voter suppression bill aimed at tamping down Black voters. Taking to Twitter, he tried to rally followers to boycott MLB's sponsors before later saying he and Sen. Ted Cruz Decries Voting Rights Bill As Shameless Power Grab By American People To Control Country. 'You still could be a carrier': Fox News host confronts Ted Cruz over refusal to wear mask after vaccination - Raw Story - Celebrating 16 Years of Independent Journalism. Fox News host Dana Perino pointed out during an interview with Sen. 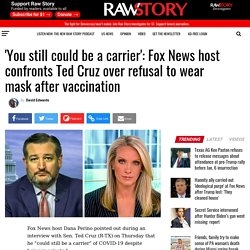 Ted Cruz (R-TX) on Thursday that he "could still be a carrier" of COVID-19 despite being vaccinated. While appearing on Fox News, co-host Bill Hemmer asked Cruz about a recent confrontation with a reporter who asked him to wear a face mask. Ted Karen Cruz refuses to wear a mask when asked, says he's following CDC guidelines when he's not. Cancun Cruz Flips Out: 'Saying Thoughts And Prayers' Is His Right. Sen. 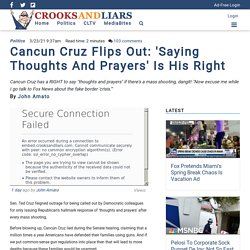 Ted Cruz feigned outrage for being called out by Democratic colleagues for only issuing Republican's hallmark response of 'thoughts and prayers' after every mass shooting. Before blowing up, Cancún Cruz lied during the Senate hearing, claiming that a million times a year Americans have defended their families using guns. And if we put common-sense gun regulations into place then that will lead to more deaths because these families would be unarmed. Huh? 'Shove your thoughts and prayers': Ted Cruz slammed for self-aggrandizing speech after Boulder shooting - Raw Story - Celebrating 16 Years of Independent Journalism. Sen. 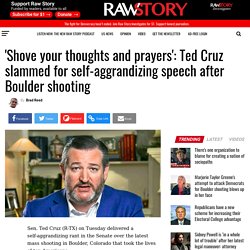 Ted Cruz (R-TX) on Tuesday delivered a self-aggrandizing rant in the Senate over the latest mass shooting in Boulder, Colorado that took the lives of ten Americans. While speaking out in opposition to new restrictions on firearms sales in the wake of the shooting, Cruz accused Democrats of using the shooting as an excuse to disarm law-abiding Americans. "Every time there's a shooting, we play this ridiculous theater where this committee gets together and proposes a bunch of laws that would do nothing to stop these murders! " Democrats Signal Openness To Restoring Filibuster To Original Form As Drawn-Out Striptease. WASHINGTON—In a sign of growing party consensus on Capitol Hill, reports confirmed Friday that all 50 Senate Democrats have signaled their openness to restoring the filibuster to its original form as a drawn-out and highly provocative striptease act. 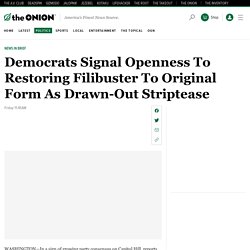 “The filibuster is nothing but a tool for obstruction without the old rules requiring senators to hold the floor with a slow, exotic dance routine in which they gradually remove all their clothes,” said Senate Majority Leader Chuck Schumer (D-NY), explaining why he believes the practice of stalling a piece of legislation for hours at a time must be accompanied by a lawmaker seductively peeling off one garment after another, only to hide his or her body from view behind a fan of ostrich feathers until three-fifths of the senators invoke cloture and bring the show to a close. “This is what sets our chamber apart from the House: a rule that empowers the minority to use a gradual buildup of sexual arousal to stop a bill.

Ted Cruz flattened for complaining about voting rights bill after trying to 'overthrow' an election - Raw Story - Celebrating 16 Years of Independent Journalism. Perhaps the worst person to lead the crusade against the John Lewis Voting Rights Act would be those members who contested the results of the 2020 election using false "voter fraud" rumors. 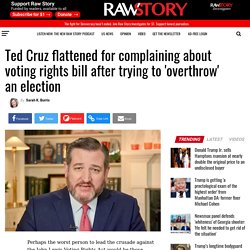 Sen. Ted Cruz (R-TX) took to Fox News to blast his displeasure about the voting rights bill, saying that it would "threaten our democracy. " Cruz claimed that "the first bill" proposed by Democrats was HR1, which is false. Ted Cruz Used Campaign Funds to Hawk Book Online. Ted Cruz Attacks Biden's 'Radical Agenda' — but Actually Shows How the GOP Got Backed into a Corner. — from Alternet There's conflicting news coming out of the White House today. 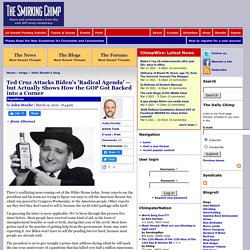 Some reports say the president and his team are trying to figure out ways to sell the American Rescue Act, which was passed by Congress Wednesday, to the American people. Ted Cruz Has a Superpower: His Total Inability to Feel Shame. Can-cun Cruz Versus Cannot-Cun Cruz. Ted Cruz uncorks profane rant on neighbors who leaked chats about Cancun vacation plans - Raw Story - Celebrating 16 Years of Independent Journalism. Sen. 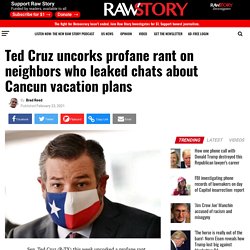 Ted Cruz (R-TX) this week uncorked a profane rant against whichever one of his neighbors leaked private chat transcripts about his infamous trip to Cancun to the New York Times. During an appearance on the "Ruthless" podcast hosted by former Mitch McConnell campaign manager Josh Holmes, Cruz ranted about neighbors who were included in group chats started by wife Heidi Cruz in which she informed them of the family's plans to escape snowstorm-stricken Texas to stay on the warm beaches of Cancun. "I will say, Heidi was pretty pissed at that," Cruz said. "She was over at the neighbor's house yesterday, sort of walking through that... ‘Despicable hypocrite’: Ted Cruz blasted for using Merrick Garland hearing to lash out at Obama’s DOJ - Raw Story - Celebrating 16 Years of Independent Journalism. During his confirmation hearing before the Senate Judiciary Committee this Monday, attorney general nominee Merrick Garland took questions from Sen. 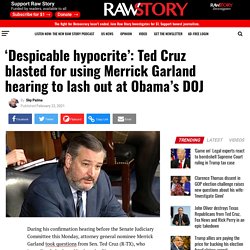 Ted Cruz (R-TX), who immediately harkened back to the Obama years. Cruz criticized what he sees as a "politicized and weaponized" Justice Department during Obama's tenure that the Republican senator alleges was used to target political opponents, namely Donald Trump. 02 22 2021 11 47 36www.youtube.com "So it is very much my hope, if you're confirmed as attorney general, that you will bring that reputation for integrity to the Department of Justice and demonstrate a willingness to stand up to what will be inevitable political pressure to once again politicize the Department of Justice and use it as a tool to attack the political opponents of the current administration," Cruz said to Garland.

But according to some of Cruz's critics on Twitter, he's sounding like a broken record. Ted Cruz: 'Fox News went all in for Trump' Ted Cruz decides he's a 'Proud Boy' Trump loyalists aim to block Biden's goal to rejoin Iran and Paris agreements. Two prominent Trump loyalists in the US Senate, Ted Cruz and Lindsey Graham, are reportedly pressing the president to submit the Iran nuclear deal and the Paris climate agreement to the chamber for ratification, in a last-minute attempt to scupper Democratic plans to take America back into the accords. 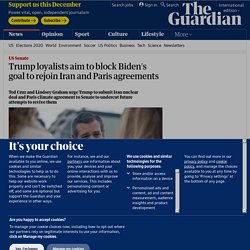 In a letter obtained by RealClearPolitics, Cruz, from Texas, urges both Trump and Mike Pompeo, the secretary of state, to plant the seeds of an eventual showdown over the two critical international agreements in the early days of the Biden administration. As Cruz describes it, by submitting the pacts to the Senate, Trump could pave the way for a vote that would fail to achieve the two-thirds needed to ratify them – thus blocking Joe Biden’s efforts to bring the US back in line with international allies. Ted Cruz begs Trump's mob to stop after they break into the House and Senate chambers - Raw Story - Celebrating 16 Years of Independent Journalism.

In D.C. this Wednesday, Trump supporters stormed the U.S. Capitol, fighting with police officers and ultimately breaching the House and Senate chambers. In a frantic message posted to Twitter, Sen. Ted Cruz (R-TX) begged the protesters to stand down. "Those storming the Capitol need to stop NOW," Cruz tweeted. "The Constitution protects peaceful protest, but violence—from Left or Right— is ALWAYS wrong.

Ted Cruz Is No Hypocrite. He’s Worse. Read: Blizzards and the birth of the modern mayor Cruz’s approach to politics and Texas’s approach to electrical generation flow from the same libertarian-inflected, low-regulation, small-government vision. In this worldview, the government’s role is to set a set of minimal baseline requirements, offer market-based incentives to ensure they work, and then stay the hell out of the way. Cruz reveres the late President Ronald Reagan, who quipped, “The nine most terrifying words in the English language are I’m from the government, and I’m here to help.”

Consider how this works out in the case of electricity. Dad of the Year, Redux. Ted Cruz smells his record. When last we checked-in with christian grifter Senator and Ayatollah Ted Cruz, he was flying back from dropping off the kiddies (10- and 12-year olds), as they insisted on a vacay, and like an in-charge Republican Senator facing both a pandemic and natural disaster, he used his children as human shields: Oh, wait: that was parody. Gentle Readers, prepare yourselves for a shock! It seems it might not be exactly true! His wife Heidi (infamously immortalized by Lord Damp Nut as a “dog” and if silence gives consent, agreed to by Ted) is Goldman Sachs executive and is probably is capable of escorting her kids on a plane was on the trip, too, so his story about escorting the kids was already leaking water.

Ayatollah Ted Passing Water Onto His Constituents* And we should add, this is (probably?) Water that Beto and AOC got for Texas. *See what I did there? Sharing Means Caring, fool! Like this: Like Loading... The Trials of Ted Cruz: Why He Thought He'd Get Away with It. — from Alternet The trials of Ted Cruz continue. The junior United States senator from Texas was caught flying to Cancun, Mexico, the same week the Lone Star State experienced the worst natural disaster since Hurricane Harvey four years ago. Cruz has blamed his daughters for the decision. (They wanted to get away from the cold, you see, and he wanted to be a good dad.) He tried suggesting he was merely accompanying his wife and daughters for the plane ride, but that was quickly revealed as a howler.

Here's why Ted Cruz and Josh Hawley are truly in danger of getting booted from the US Senate - Raw Story - Celebrating 16 Years of Independent Journalism. Ted Cruz Makes Last Effort To Block Election Result By Unleashing Wave Of Locusts From Mouth To Black Out Sun. News That Will Drive You to Drink. ‘Treasonous garbage’: GOP senators ripped as ’liars and cowards' for effort to overturn 2020 election - Raw Story - Celebrating 16 Years of Independent Journalism. Ayatollah Ted Joins the Fun.

Ted Cruz Says He Knows One Person Who Likes His Beard. Ted Cruz's Once-Adequate Beard Has Evened Itself Out With the Inadequate Man It Rests Upon. Ted Cruz Has a Beard and It Actually Looks Good on Him. Donald Trump gets sweet revenge on Ted Cruz today in Texas. CNN anchor busts up laughing as Ted Cruz spokeswoman stutters in response to footage of Trump trashing 'Lyin Ted' Watch the 5 seconds of the Texas Senate debate that Ted Cruz wishes he could delete from the Internet.

Internet drags 'black hole of charisma' Ted Cruz for whining about Facebook bias: 'Why won't you accept my friend request?’ Splinternews. Splinternews. Is Ted Cruz human? An investigation. Ted Cruz Awkwardly Explains Why Texas Should Have Federal Relief Money But Not Victims Of Hurricane Sandy. Ted Cruz’s claim that two-thirds of the Hurricane Sandy bill ‘had nothing to do with Sandy’ Hurricane Harvey And The Potential Hypocrisy Of Texas Republicans. “I may owe Mitt Romney an apology”: Jon Stewart mocks Ted Cruz’s absurdly creepy presidential announcement. Sally Yates Just Opened A Can Of Constitutional Whoop Ass On Ted Cruz (VIDEO)

Ted Cruz Tries to Justify Trump Endorsement to a Furious Glenn Beck. Ouch: Watch as Ted Cruz accidentally elbows his wife in the face after leaving presidential race. Heidi Cruz finally responds to allegations that Ted Cruz is the Zodiac Killer. The Best Reporting on Ted Cruz Through the Years. Cruz’s Record Before the Supreme Court. Everybody Hates Ted. ‘Here am I Lord, use me’: Ted Cruz’s dad says Holy Ghost authorized White House run.