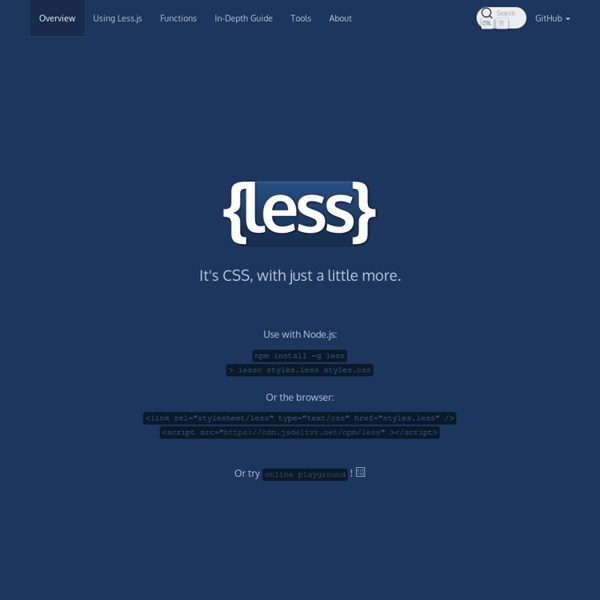 Less is a CSS pre-processor, meaning that it extends the CSS language, adding features that allow variables, mixins, functions and many other techniques that allow you to make CSS that is more maintainable, themable and extendable. Less runs inside Node, in the browser and inside Rhino. There are also many 3rd party tools that allow you to compile your files and watch for changes. For example: compiles to Less can be used on the command line via npm, downloaded as a script file for the browser or used in a wide variety of third party tools.

Tired, hungry and sad? Relax, you're hibernating by CATHERINE ZANDONELLA, Daily Mail Does dull weather wear you down? Does every shop crammed with sales stock send your spirits plummeting? Edge Animate to Animate CC: Responsive Scaling and Positioning – In Flagrante Delicto! I’ve received a lot of inquiries by Edge Animate users as to how to make items responsive within Animate CC. So many, in fact, that I decided to produce a number of demonstration projects, record some video on each one, and write this little article. First, I’ll just emphasize that the way Edge Animate handles things like element scaling and sizing is very DOM-oriented… because it works within the very narrow focus of the browser DOM. Animate CC is platform-agnostic (not specifically an HTML tool) and works differently in terms of targeting a single element when targeting HTML5 Canvas (the canvas DOM element). So a lot of things like media queries and such, as employed by the Edge suite, go out the window.

10 LESS CSS Examples You Should Steal for Your Projects LESS, Sass and other CSS preprocessors represent an awesome way to extend CSS to be everything a programmer ever wanted. Variables, mathematical operations, mixins and a lot more make these tools invaluable to coders who can appreciate the benefits of typing less while accomplishing more. One of the most major hurdles to getting started with these tools is simply figuring out just what the heck you’re going to do with them. We’ll help you out in a big way today by hooking you up with ten incredibly useful LESS snippets that you can drop into your projects today. Using LESS

Welcome to Jinja2 — Jinja2 Documentation (2.8-dev) Jinja2 is a modern and designer-friendly templating language for Python, modelled after Django’s templates. It is fast, widely used and secure with the optional sandboxed template execution environment: <title>{% block title %}{% endblock %}</title><ul>{% for user in users %} <li><a href="{{ user.url }}">{{ user.username }}</a></li>{% endfor %}</ul> Features: sandboxed executionpowerful automatic HTML escaping system for XSS preventiontemplate inheritancecompiles down to the optimal python code just in timeoptional ahead-of-time template compilationeasy to debug. Line numbers of exceptions directly point to the correct line in the template.configurable syntax How SVG Line Animation Works I bet all of you have seen that little trick where an SVG path is animated to look like it's drawing itself. It's super cool. Jake Archibald pioneered the technique and has a super good interactive blog post on how it works. Brian Suda wrote about it on 24 Ways. Polygon used it to great effect on a custom designed article and wrote about it. Codrops has some neat examples.

Chronic Anxiety Disorder: The Price You Pay for Hiding Your True Self The more I learn about anxiety, the more I realize just how widespread a problem it really is. There are millions upon MILLIONS of people all over the globe struggling with some sort of chronic anxiety disorder, often more than one type. Seeing how much people are suffering makes me really sad sometimes. CSS Animation Generator CSS animations were added at the start of CSS3 which allows you to transition from one CSS style to another. To use a CSS animation you will have to start styling the element and a number of keyframes to define the transition from start to end of the animation. Before CSS animation was available, the way you would make an element change styling would be to use JavaScript to change an element's styling properties in a certain order. The advantages of using CSS animation over JavaScript driven animations is that they run smoother than JavaScript, which commonly skipped keyframes. Browser rendering engines are built to work better with CSS animation. They are also easier to develop as all coding of the animation is done in CSS and you just select which properties to change at certain keyframes.

Modules · nodejs/node-v0.x-archive Wiki This page is deprecated. Feel free to add to it, but be advised that it is, at best, a faded relic of Node modules that were written before npm was a dominant force in the Node.js ecosystem. It is not all that useful any more. If you are a newcomer, it can be handy to at least get a starting point.

Where is the DirectX SDK? - Games for Windows and the DirectX SDK See also "Where is the DirectX SDK (2015 Edition)?" The DirectX SDK is now part of the Windows 8.0 SDK. The new Windows 8.0 SDK is where you’ll find DirectX 11.1, Direct2D, DirectWrite, DXGI 1.2, WDDM 1.2, DirectXMath, Feature Level 11.1 devices, XINPUT 1.4, XAUDIO 2.8, WIC2, the "Developer Runtime" (debugging layers and the REF device), and the latest HLSL compiler (D3DCompiler_*.DLL). Samples are now shipped online and can be found at the MSDN Code Gallery. We recommend using the Windows 8.x SDK instead of the DirectX SDK, or at a minimum using the Windows 8.x SDK primarily with only specific usages of the legacy DirectX SDK. All Tuts+ Courses Reactive programming is a way of coding with asynchronous data streams that makes a lot of problems easier to solve. RxJS is a popular library for reactive...Once in a while, it's important for us as developers to go back to what made us excited about computers in the first place. For Derek Jensen, that is gaming....React is a flexible framework that makes it easy to build single-page web applications. One of its tools is a set of lifecycle methods which you can add to...The PixelSquid plugin for Photoshop is an exciting new technology that provides the benefits of 3D elements without having to understand a 3D program or the...How your app looks is as important as how it works, and animation is an important part of modern user interfaces. Whether by changing the color of an element...jQuery UI is an extension of jQuery that makes it easy to create clean user interface elements for your websites.