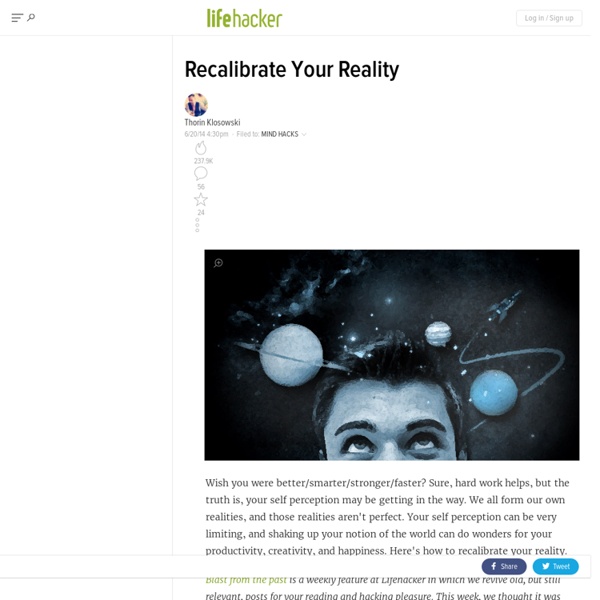 43 Simple Ways To Simplify Your Life Post written by Sherri Kruger. Follow me on Twitter. Simplicity. How can we make things simpler, more streamlined, or more efficient? Is this all just hype or is there actually something to this simplicity thing? Reducing complexity in my life has reduced stress, increased free time, and top priorities are actually top priorities. The 8 Most Unexpected Advantages of Anxiety Anxiety can be crippling, but psychology studies find it does have some unexpected upsides. Anxiety can be crippling, but sometimes it is a crucial part of getting the best out of yourself. Artists, comedians, athletes and other performers often talk about the right amount of anxiety and how it can improve creativity and performance. But anxiety also has a number of lesser known upsides… 1. People will trust you more

Unlocking the Science of Habits: How to Hack the Habit Loop & Become the Man You Want to Be For better or for worse, our habits shape us. A good habit is a strong ally in our journey to becoming the men we want to be, while a bad habit acts like a millstone around our necks. (Want to know why? Read this Manvotional.) To achieve our goals, whatever they may be, it’s necessary to defeat our bad habits and encourage the good ones.

One Habit of Highly Successful People According to one of my favorite bloggers, you should say “no” to be successful and “yes” to be happy. Highly successful people say no a lot, Eric Barker explains, instead focusing intently on their specific craft to achieve a high level of excellence. Happy people, on the other hand, are open to a variety of opportunities that provide them with new and interesting experiences. They tend to live more spontaneous lives and interact with more people.

How To be so Productive You Can't Stand it You might think that creatives as diverse as Internet entrepreneur Jack Dorsey, industrial design firm Studio 7.5, and bestselling Japanese novelist Haruki Murakami would have little in common. In fact, the tenets that guide how they – and exceptionally productive creatives across the board – make ideas happen are incredibly similar. Here are 10 laws of productivity we’ve consistently observed among serial idea executors: 1. Break the seal of hesitation. A bias toward action is the most common trait we’ve found across the hundreds of creative professionals and entrepreneurs we’ve interviewed.

4 Surprising Advantages of Being Depressed Why being depressed can sometimes be necessary, even beneficial. Depression can be an adaptive way of dealing with certain problems in life, such as relationship breakdown and illness, say the authors of a new study. While clinical depression is a serious mental health issue, the researchers argue that by examining how depression might have originally arisen, we can better understand how to treat it. Dr. Did you know Reynolds Wrap has lock in taps to hold the roll in place The color on the bread tab indicates how fresh the bread is And those colors are in alphabetical order: b, g, r, w, y.

30 Habits that Will Change your Life Developing good habits is the basic of personal development and growth. Everything we do is the result of a habit that was previously taught to us. Unfortunately, not all the habits that we have are good, that’s why we are constantly trying to improve. The following is a list of 30 practical habits that can make a huge difference in your life. You should treat this list as a reference, and implement just one habit per month.

The Habits of the World's Smartest People (Infographic) There is no one picture of intelligence, but many people with high IQs do tend to share some of the same habits -- both good and bad. For example, according to research complied by Online-PHD-Programs.org, while those with high IQs tend to set goals and read avidly, they are also more likely to drink more heavily and suffer from anxiety. For more on the habits of smart people, including a look at the IQs of icons such as Albert Einstein and Bill Gates, check out the infographic below. Click to Enlarge+

How to Become a Productivity Ninja Believe it or not, productivity can be learned, grasshopper. Yeah, I didn’t believe it either..until I transformed myself into a productivity ninja. Today, I’m going to teach you to maximize your time at your computer, dominate your email in-box, and spend less time on unimportant tasks to focus on what really matters. Once you have freed up your time, you’ll be surprised how you’re able to hang out with friends and family, pick up new skills, spend more time exercising, or cook healthy meals.

How To Turn Character Flaws Into Strengths With One Easy Mental Trick An easy mental trick to turn poor personality traits to your advantage. Believing that a negative personality trait has a positive ‘silver lining’ is enough to boost performance in that area, a new study finds. For example, a person who is very pessimistic might believe that one positive side of this ‘negative’ personality trait is that it makes them more realistic. The study, published in the Journal of Experimental Social Psychology, found that those who mentally endorsed the idea that being impulsive was linked to greater creativity, were actually more creative on a subsequent test (Wesnousky et al., 2014). 7 Random Things You Won't Believe Are Shortening Your Life Most "tips" for living longer are pretty obvious stuff: eat healthy, don't work too much, stay fit, go on lots of vacations, maybe don't be a popular rock musician aged 27. It turns out that not only are some of these popular beliefs full of shit, but the real longevity indicators are things you probably wouldn't guess in a hundred years, even if you managed to live that long. #7.