(1) The Outsider's Guide to the Social World. (1) Rapid Personality Change and the Psychological Rebirth. (1) Creativity and the Pursuit of Excellence. (1) The Psychology and Principles of Mastery. How to Overcome the Downward Pull of Other People. Steven Brill's "Tailspin": How My Generation Broke America. Swedish 12 Man Tipi Tent with wood stove. Meet Ten Corporate Giants Helping Israel Massacre Gaza Protesters. NEW YORK — As Israeli soldiers gun down unarmed Palestinian demonstrators in the Great March of Return, their lethal operations depend on an array of contractors and suppliers, many of them companies based outside Israel. 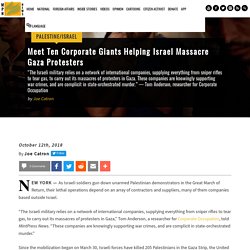 “The Israeli military relies on a network of international companies, supplying everything from sniper rifles to tear gas, to carry out its massacres of protesters in Gaza,” Tom Anderson, a researcher for Corporate Occupation, told MintPress News. “These companies are knowingly supporting war crimes, and are complicit in state-orchestrated murder.”

Since the mobilization began on March 30, Israeli forces have killed 205 Palestinians in the Gaza Strip, the United Nations’ Office for the Coordination of Humanitarian Affairs in the Occupied Palestinian Territory reported on October 4. Samantha Craft's Unofficial Checklist: Females and Aspergers. This list is meant as a springboard for discussion and more awareness into the female experience with autism. 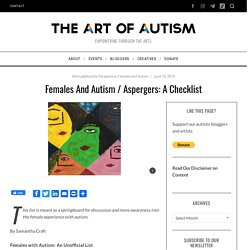 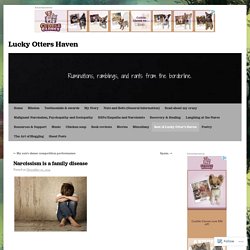 Because it’s a genetically inherited disorder (at least to some degree) but also because narcissism is a defense mechanism to protect and isolate oneself from abuse, many victims of narcissistic abuse become narcissists themselves. Those who do not become narcissists suffer from all manner of mental disorders, especially PTSD, avoidant personality disorder, schizoid and schizotypal personality disorder, depression and bipolar disorder, the whole gamut of anxiety and dissociative neuroses, and even psychoses like schizophrenia. And it’s entirely possible to be a narcissist and ALSO suffer from those other disorders. Being a child of a narcissist is the ultimate mind-fuck. There is no way to escape its effects, unless you are removed from the disordered FOO at an early age and adopted and raised by loving parents.

Sam was an abused child, the oldest son of a malignantly narcissistic, thoroughly evil mother. Q. The Orwellian New Digital Abilify Will Subjugate Vulnerable People Across the US. In 2015 I wrote an MIA article called “Medication Mechanization: Microchip Sensors in Abilify to Increase Medication Compliance.” 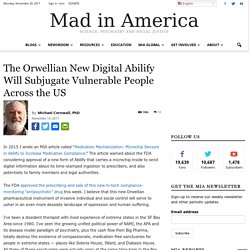 The article warned about the FDA considering approval of a new form of Abilify that carries a microchip inside to send digital information about its time-stamped ingestion to prescribers, and also potentially to family members and legal authorities. The FDA approved the prescribing and sale of this new hi-tech compliance-monitoring “antipsychotic” drug this week. I believe that this new Orwellian pharmaceutical instrument of invasive individual and social control will serve to usher in an even more desolate landscape of oppression and human suffering. I’ve been a dissident therapist with lived experience of extreme states in the SF Bay Area since 1980. Our efforts on the Gnosis Project are bolstered by many volunteers and yearly large public weeklong events at Esalen Institute focusing on the living legacy of RD Laing. I’m marking my calendar. Diabolical Confusions. Within my own research into the world of the paranormal, I began to start digging into anything I could to find out details in regards to malevolent hauntings and/or certain spirits. 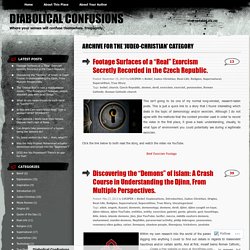 And at first, myself being Roman Catholic, obviously began to look inwards to my own religion for answers, but unfortunately, the topic of demonology pre-dates even my religion. True self and false self - Wikipedia. True self and false self are psychoanalytic terms invented by D. W. Winnicott in 1960.[1] Winnicott used "True Self" to describe perception based on spontaneous authentic experience, a sense of "all-out personal aliveness" or "feeling real".[2] Accordong to Winnicott, "False Self" is a defense designed to protect True Self by concealment. Internet Trolls Are Narcissists, Psychopaths, and Sadists. In this month's issue of Personality and Individual Differences, a study was published that confirms what we all suspected: internet trolls are horrible people. 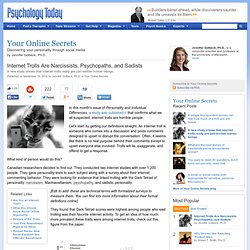 Let's start by getting our definitions straight. An internet troll is someone who comes into a discussion and posts comments designed to upset or disrupt the conversation. Often, it seems like there is no real purpose behind their comments except to upset everyone else involved. Trolls will lie, exaggerate, and offend to get a response. What kind of person would do this? Canadian researchers decided to find out. [Edit to add: these are technical terms with formalized surveys to measure them. They found that Dark Tetrad scores were highest among people who said trolling was their favorite internet activity. Look at how low the scores are for everyone except the internet trolls!

Trolls truly enjoy making you feel bad. Internet troll personality study: Machiavellianism, narcissism, psychopathy, sadism. Medioimages/Photodisc In the past few years, the science of Internet trollology has made some strides. 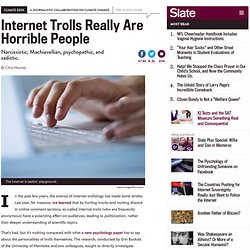 Last year, for instance, we learned that by hurling insults and inciting discord in online comment sections, so-called Internet trolls (who are frequently anonymous) have a polarizing effect on audiences, leading to politicization, rather than deeper understanding of scientific topics. That’s bad, but it’s nothing compared with what a new psychology paper has to say about the personalities of trolls themselves. Human-being.