Nigeria Housing Market: 40% increase in cement prices slows growth in real estate sector. Lagos slums are being razed to make way for luxury properties. That’s Nigeria. This month, thousands of Nigerians have been rendered homeless after police stormed Otodo-Gbame, a riverbank community in the country’s commercial capital, Lagos, razing homes and chasing away residents with bullets and teargas. 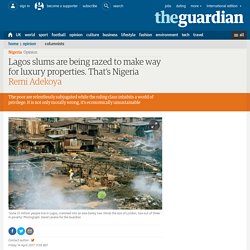 This comes after 4,700 people in the settlement had their homes demolished in March, and 30,000 were evicted last November, so altogether tens of thousands of people have been systematically chased off lands that they have inhabited, in many cases, since the colonial era. Officials initially cited environmental concerns as the reason for the demolitions, but now claim the blanket evictions are a security measure against “militants” purportedly using the communities as a base. The demolitions have gone on despite a January court injunction ordering they be halted. Rights groups now suggest more than 300,000 people face similar eviction from waterfront communities across Lagos. 2017 Budget: National Housing Programme To Gulp N41bn. New N20billion REIT lifts Nigerian real estate industry — Property — The Guardian Nigeria. Fresh prospects maybe on the card for real estate investors seeking property ownership without the attendant expenses or difficulties of being a landlord, if statements made recently by one of Nigeria’s leading property development company – Top Services Limited (TSL) are anything to go by. 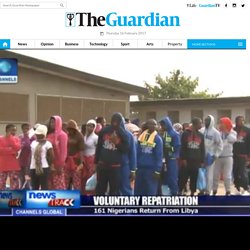 The company with specialty in providing “neighbourhood” malls has announced, it will float a N20 billion Real Estate Investment Trust (REIT) in the capital market. REITs are corporations or trusts that use the funds of many investors to purchase and manage income property and/or mortgage loans. It is traded on the Nigerian Stock Exchange (NSE) just like shares. It offers tax advantages to investors and provide a liquid way to invest in real estate, which is an otherwise illiquid market. Another benefit of REITs is that they allow investors to share in non-residential properties like hotels, shopping complexes, malls, and industrial properties. For Mr. Real estate sector slumps amid shrinking funds — Property — The Guardian Nigeria. $2bn fund to be set up to tackle Nigeria’s affordable housing drought. The Federal Mortgage Bank of Nigeria is teaming up with a number of housing developers to finance the construction of more than 10,000 homes a year across the country. 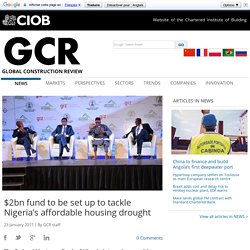 The aim is to build up a fund of $2bn and disburse $200m a year in loans to developers. A memorandum of understanding was signed last week in Abuja by Richard Esin, the managing director of the bank, James Mugeruwa, managing director of international affordable housing developer Shelter Afrique and Ugo Chime, president of the Real Estate Developers Association of Nigeria. The drive to improve the supply of homes was begun at the “Developing a Blueprint for Affordable Housing” conference organised last June by the Federal Ministry of Power, Works and Housing, housing developers and the German Development Corporation (pictured).

The move is a response to a deficit of about 17 million homes across Nigeria. The situation is particularly serious in Lagos, which has an immigration rate of more than 500,000 people a year. Lagos living: Solving Nigeria's megacity housing crisis. Nigeria's largest city Lagos is facing a housing crisis. 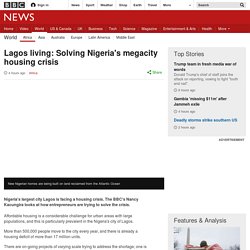 The BBC's Nancy Kacungira looks at how entrepreneurs are trying to solve the crisis. Affordable housing is a considerable challenge for urban areas with large populations, and this is particularly prevalent in the Nigeria's city of Lagos. More than 500,000 people move to the city every year, and there is already a housing deficit of more than 17 million units. There are on-going projects of varying scale trying to address the shortage; one is reclaiming land from the Atlantic Ocean to build a new city suburb called Eko Atlantic on the shores of Victoria Island. Tonnes of sand and heavy rock were poured into the ocean to provide 10 sq km (3.8 sq miles) of land for shops, offices and homes. Protected by an 8km long sea wall, the city will have its own power and water supply, and even an independent road network. 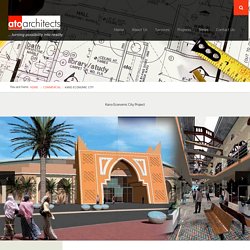 Nigeria: Niger Reduces Cost of Certificate of Occupancy to N15, 000. By Ahmed Tahir Ajobe Niger State government has reduced the cost of obtaining certificate of occupancy by existing and prospective landowners across the state to N15,000 effective from January 1, 2017. 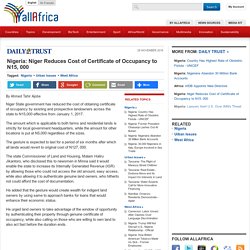 The amount which is applicable to both farms and residential lands is strictly for local government headquarters, while the amount for other locations is put at N5,000 regardless of the sizes. The gesture is expected to last for a period of six months after which all lands would revert to original cost of N127, 000. The state Commissioner of Land and Housing, Malam Haliru Jikantoro, who disclosed this to newsmen in Minna said it would enable the state to increase its Internally Generated Revenue (IGR) by allowing those who could not access the old amount, easy access, while also allowing it to authenticate genuine land owners, who hitherto not could afford the cost of documentation. 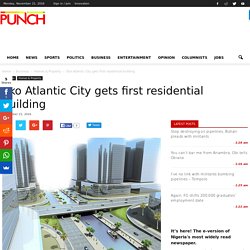 The unveiling, according to the promoters of the city, follows the inauguration last year of the Eko Boulevard, reputed as the country’s first eight-lane city road. The ‘Eko Pearl Towers’, which is the first residential development in the city, is a set of high-rise buildings privately owned and developed by Eko Pearl Construction Company, and consists of five high rise residential towers, each topped with luxury penthouse, and two and three-bedroom apartments. The firm said it would be unveiling the first tower known as the ‘Black Pearl’, while the second, the ‘Champagne Pearl’, is scheduled for completion next year. Copyright PUNCH. Contact: editor@punchng.com. Nigeria: Real estate developers continue to build despite recession. Nigeria’s real estate sector suffers as luxury houses stand vacant.

International hoteliers bet on Lagos. The findings of this year’s Hotel Chain Development Pipeline Survey, produced by W Hospitality Group, show that Lagos is the hottest city in Africa, when it comes to the development of new hotels by international hotel investors. 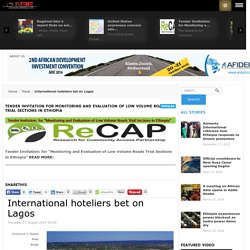 In compiling the data, W Hospitality Group spoke to 37 hotel chains with 80 brands between them. To qualify for the study, hotel chains need to be operating in more than one country so by definition, more hotel development activity is taking place because domestic players in the market have not been counted. Nigeria: 19 States Offer Land for Govt's Housing Project. By Simon Echewofun Sunday Nineteen states of the federation including 11 from the North have responded to a request on land allocation for the federal government's mass housing project, the Ministry of Power, Works and Housing has said. 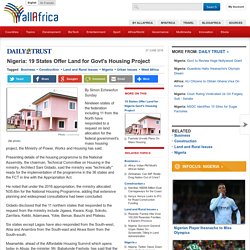 Presenting details of the housing programme to the National Assembly, the chairman, Technical Committee on Housing in the ministry, Architect Sani Gidado, said the ministry was "technically" ready for the implementation of the programme in the 36 states and the FCT in line with the Appropriation Act. 12 states pledge land for government’s new housing initiative » TODAY.ng. At least, 12 states have responded to a request by the Federal Government to release landed property to her on, which the latter intends to construct affordable homes for Nigerians, and thereby reducing the wide deficit gap of shelter in the country. 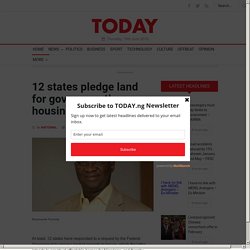 Minister of Power, Works and Housing, Mr. Babatunde Fashola, last week in Abuja, revealed that the plan by the government to create more affordable homes for her citizens was gathering momentum as more states have indicated interest. According to the Minister, who spoke at the 35th Annual General Meeting and International Symposium of Shelter Afrique, even though states were already responding positively to the government’s initiative, the first key to the roadmap in housing was planning. The Minister, who noted that what the country now has as a National Housing Policy was only a policy statement and not a plan, said, “We must never be tired to explain the necessity and importance of proper planning. Nigeria's $70bn Construction Industry. FHA begins construction of 30,000 housing units in Nigeria. The Federal Housing Authority of Nigeria in partnership with the Federal Mortgage Bank of Nigeria (FMBN), have commence the construction of 30,000 housing units in Nigeria.

According to FMBN the housing project will be executed at a cost of US$45.2m. Additionally, about 2 million people will be employed across the country. The housing units will be executed in Lagos, Port Harcourt, Kano and Abuja. The project was inaugurated at FMBN headquarter during the project inter-agency committee meeting. Mitros City to de-congest Lagos state. Ogun State government to break ground on Mitros city project. Nigeria property boom follows Boko Haram retreat - Pan African Visions. Property investors in the Nigerian city of Maiduguri are benefiting from a rise in real-estate prices following the retreat of Boko Haram fighters. Maiduguri is the largest city in Borno state, once a stronghold of the fighters and a frequent target for its suicide bombers. The group claims to be fighting against Western influence and is thought to have killed about 15,000 people and driven more than two million from their homes during its six-year insurgency.

Since the Nigerian military began a wide-ranging military operation against Boko Haram, many of Maiduguri’s residents that had fled are on their way back home. They had sold land and property to escape the armed group’s advance but their return is forcing prices to go up. Nigeria: Plan to Register Abuja Houses, Underway. Changing the face of Nigeria’s real estate market…Dubai style. Despite Nigeria’s giant economic status within Africa, housing remains a major problem. The World Bank says Africa’s largest economy would require a minimum of 700,000 housing units annually to meet its housing deficit. In recent years, private investors have significant ramped up development, particularly in the countries more developed cities like Abuja, Lagos and Port Harcourt, but this hasn’t served to wipe off significant the high number of Nigerians who don’t own a home.

By Kingsley Adegboye IN fulfillment of its promise to deliver 10,000 units of affordable and quality homes for middle-income Nigerians by 2020, Alpha Mead Development Company (AMDC), last week, unveiled the completed Show House at its 112-unit Lekki Pearl Estate. Lagos approves three new model city plans. THE urban renewal programme embarked upon by the Lagos State government received a boost last week as three new model city plans were signed, following their publicly presentation. LASG begins review of Ikeja Model City Plan. The Lagos State Government on Friday said it had begun a review of the Ikeja Model City Plan as part of efforts to create a better state with standard and adequate infrastructure.