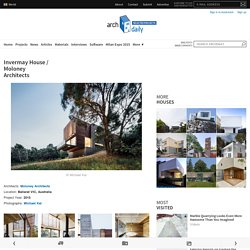 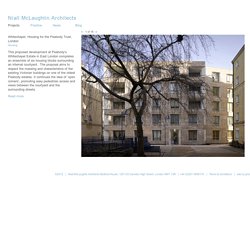 The quiet revolution in British housing. Once upon a time new housing in Britain was terrible. 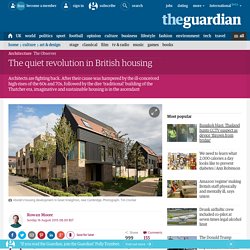 Engendered by the fearful coupling of utopian architectural fanatics and of bureaucratic automata in local authorities, it was soulless, alienating, malfunctioning and often damp. Such at least is the conventional narrative which, if it overlooks many beautiful and conscientious works now being rediscovered, still contains a portion of truth. This was in the time loosely known as the 60s and 70s, an era of state-led homebuilding that would be terminated by Margaret Thatcher, such that another kind of housing could flourish, terrible in a different way: Noddy houses, faux-traditional executive homes, could-be-anywhere progeny of developers’ calculations and planners’ vague strictures on being “in keeping”, brick boxes packed with miniature bedrooms and bathrooms that would look better in estate agents’ particulars than in real life. This story might be oversimplified too, although I can’t immediately see in what way. The Nook / Hall + Bednarczyk. 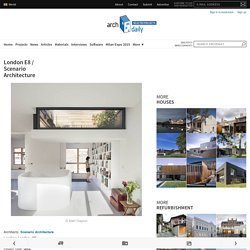 We were approached by our clients, a young family of 3 to redesign their home. The property had received previously been granted planning permission, however, the internal layout did not suit the clients’ needs. The site was challenging as it is part of a terrace that opens out to a hard landscaped internal community space/car park. The key elements of our brief were to utilize daylight as much as possible, to allow the family to interact in an open space whilst maintaining a warm and engaging environment and to have a green space that can be seen from the living areas. Through analysing the site and the day-to-day habits of the clients we developed a design that fulfils their needs. KA House / IDIN Architects. Architects: IDIN Architects Location: Pak Chong, Pak Chong District, Nakhon Ratchasima, Thailand Design Team: Jeravej Hongsakul, Rubporn Sookatup Area: 240.0 sqm Project Year: 2014 Photographs: Ketsiree Wongwan From the architect. 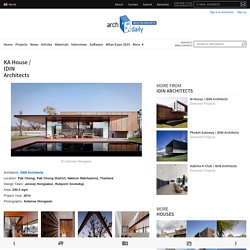 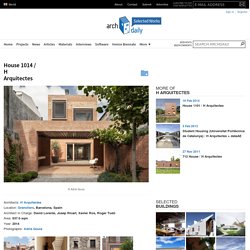 The plot is located in the historical city centre of Granollers and placed into an urban fabric of dwellings between party walls. The available space is narrow and elongated, only 6.5 m wide; and accessible from two streets. Two Verandas by Gus Wüstemann. Swiss architect Gus Wüstemann used raw concrete, oak and travertine to create the smooth walls and floors of this home and poolhouse overlooking Lake Zurich (+ slideshow). 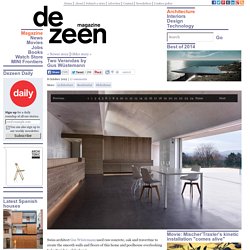 "The use of raw materials is essential for our work," Wüstemann told Dezeen. "It's that kind of atmosphere we're looking for - authentic surfaces with character. " Perforated walls bring light into Gus Wüstemann's Los Limoneros house. This house in Spain by Swiss architect Gus Wüstemann features a largely windowless exterior, but an internal courtyard surrounded by perforated walls ensures that light permeates the building all year round (+ slideshow). 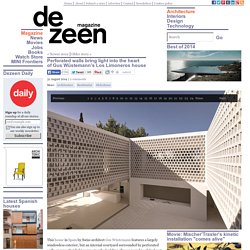 Named Los Limoneros, the house in located in Marbella. It is surrounded by private villas and bordered by a golf course, so Gus Wüstemann decided to enclose it behind austere three-metre-high walls, but also allow rooms to open out to the garden and pool. "Being in Andalucia in the south of Spain, the idea was to create a huge garden with big covered outside spaces, giving some shade when needed, where you could live outside day and night, all year long," said Wüstemann. The two-storey house was designed as a second home for a family, who asked for a property where they could enjoy southern Spain's warm climate in privacy. It replaces a non-descript house that previously sat on the site. The building was constructed with a strict 12-month schedule.

Project credits. ArchDaily’s 50 Best Houses of 2014. For another year, in 2014 ArchDaily has featured hundreds of houses from designers around the globe, with homes that appear to float above ground, sink below grade, snake through forests, jut over cliffs, and blur the line between building and environment. 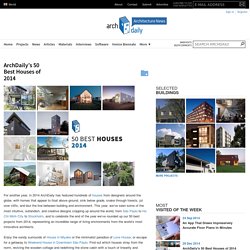 This year, we’ve seen some of the most intuitive, outlandish, and creative designs cropping up around the world, from São Paulo to Ho Chi Minh City to Stockholm, and to celebrate the end of the year we’ve rounded up our 50 best projects from 2014, representing an incredible range of living environments from the world’s most innovative architects. Enjoy the sandy surrounds of House in Miyake or the minimalist paradise of Love House; or escape for a getaway to Weekend House in Downtown São Paulo. Find out which houses stray from the norm, reviving the wooden cottage and redefining the stone cabin with a touch of linearity and serious panoramic views. Find out which houses make our list after the break B House / ch+qs-arquitectos. The House of the Infinite / Alberto Campo Baeza. Architects: Alberto Campo Baeza Location: Cádiz, Spain Area: 900.0 sqm Year: 2014 Photographs: Javier Callejas Sevilla Codirector Of Construction: Tomás Carranza, Javier Montero Collaborators: Alejandro Cervilla García, Ignacio Aguirre López, Gaja Bieniasz, Agustín Gor, Sara Oneto Structure: Andrés Rubio Morán Quantity Surveyor: Manuel Cebada Orrequia Contractor: Chiclana Quality Control: Laboratorios Cogesur From the architect. 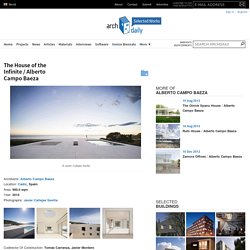 On a marvelous place like a piece of earthly paradise, at Cádiz, we have built an infinite plane facing the infinite sea, the most radical house we have ever made. At the very edge of the waters of the Atlantic Ocean, where the sea unites the new and the old continent, emerges a stone platform. At the place where all the ships from the Mediterranean used to pass and still pass by as they head off into the Atlantic. There we have erected a house as if it were a jetty facing out to sea. The Romans were there a handful of centuries ago. Solohouses. AA House by OAB. 30 Best Modern House Architecture Designs. 30 Best Modern House Architecture Designs Modern architecture is impressive and in majority of cases tries to combine the nature beauty (imperfect stones, trees, wavy hills) with the existing human made materials.

Imagination is the limit and you’ll see below amazing homes that defies the laws of physics. Beyond the unique exterior shape an architect gives to a modern house, it’s imperative to think about the safety and purpose of the building. Sometimes you may wonder what was he thinking about when designing such a house but you’ll understand shortly when reading a review or an interview with the designer. I think in everyone’s life at least one time we had in mind a dream house. These modern and luxury house designs presented below should inspire and give you a new perspective of the modern architecture. Modern House Architecture H.2 Residence by 314 Architecture Studio Toblerone House by Studio MK27 AA House by OAB Hurst House by John Pardey Architects and Strom Architects Diamondhouse. BF House / OAB + ADI. Architects: OAB + ADI Location: Borriol, Castellón de la Plana, Spain Design Team: Carlos Ferrater, Xavier Martí, Carlos Escura, Carlos Martín Project Year: 2011 Photographs: Joan Guillamat.