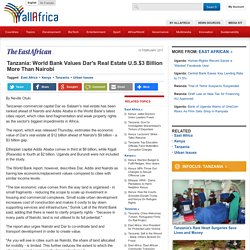 The report, which was released Thursday, estimates the economic value of Dar's real estate at $12 billion ahead of Nairobi's $9 billion - a $3 billion gap. Ethiopian capital Addis Ababa comes in third at $6 billion, while Kigali (Rwanda) is fourth at $2 billion. Uganda and Burundi were not included in the study. The World Bank report, however, describes Dar, Addis and Nairobi as having low economic/replacement values compared to cities with similar income levels. Tanzania: Minister, Over 80 Senior Officials Shift to Dodoma. Photo: The Citizen A view of Dodoma municipality Central Business District. 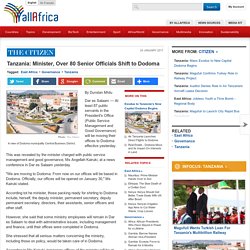 By Dunstan Mhilu Dar es Salaam — At least 87 public servants in the President's Office (Public Service Management and Good Governance) will be moving their offices to Dodoma effective yesterday. This was revealed by the minister charged with public service management and good governance, Ms Angellah Kairuki, at a news conference in Dar es Salaam yesterday. "We are moving to Dodoma. Tanzania: NHC Rolls Out Big Dodoma Housing Plan. By Alvar Mwakyusa Civil servants and employees from the private sector have been assured of adequate accommodation in the designated administrative city of Dodoma, as the National Housing Corporation (NHC) seeks to raise 60bn/- to put up between 300 and 500 houses in the capital. 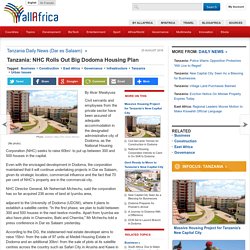 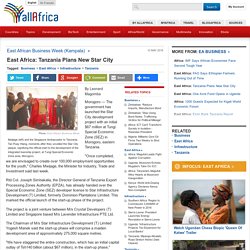 Tanzania: Two New Satellite Cities Planned for Northern Circuit. By Marc Nkwame Arusha — Two new cities are in the process of cropping up in the Northern Zone and the Deputy Minister for Lands, Housing and Human Settlements Development, Ms Angelina Mabula, has just visited the two locations where the ambitious multi-billion projects are mapped to be established. 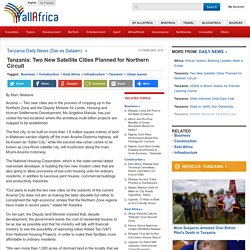 The first city, to be built on more than 1.6 million square metres of land in Matevesi section slightly off the main Arusha-Dodoma highway, will be known as 'Safari City,' while the second new urban centre to be known as Usa-River satellite city, will mushroom along the main Moshi-Arusha motorway.

The National Housing Corporation, which is the state-owned oldest real-estate developer, is building the two new modern cities that are also going to allow provisions of low-cost housing units for ordinary residents, in addition to luxurious pent houses, commercial buildings and productivity industries. Commercial Bank_Mortgage _Products. Tanzania: Private Surveyors Join Efforts to End Slums. By Alvar Mwakyusa WITH hardly 10 per cent of land in Tanzania surveyed and government having limited resources to conduct the exercise, private players are now chippingin to ensure unplanned settlements become a history. 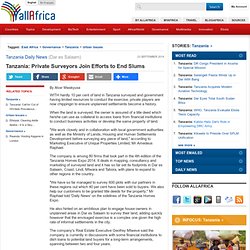 When the land is surveyed, the owner is assured of a title deed which he/she can use as collateral to access loans from financial institutions to conduct business activities or develop the same property of land. "We work closely and in collaboration with local government authorities as well as the Ministry of Lands, Housing and Human Settlements Development before surveying any piece of land," according to Marketing Executive of Unique Properties Limited, Mr Amedeus Raphael. Home. Slums are a clear manifestation of a poorly planned and managed urban sector and, in particular, a malfunctioning housing sector. 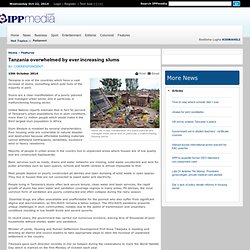 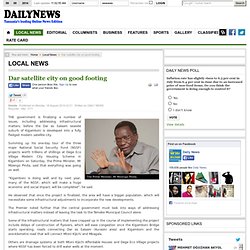 Chinese in $20m for Tanzanian units. Sleeping with the fish: Underwater hotel room opens off Tanzania coast. This latest effort can be found off an African island and straightaway is placed high on that list of 'amazing hotels I wish i could get to' many travelers have. 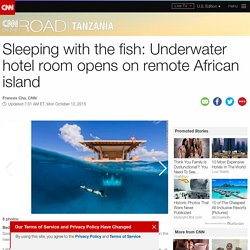 Tanzania Housing Shortage of 3 Million to be Achieved via Private Public Partnership. The Vice President of Tanzania, Dr Mohammed Gharib Bilal announced that the current shortage of housing in Tanzania can only be achieved through Public Private Partnerships (PPP). 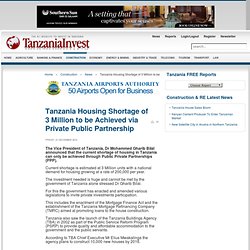 Current shortage is estimated at 3 Million units with a national demand for housing growing at a rate of 200,000 per year. The investment needed is huge and cannot be met by the government of Tanzania alone stressed Dr Gharib Bilal. For this the government has enacted and amended various legislations to invite private investments participation. Tanzania's Multibillion Housing Project in Arusha. The National Housing Corporation (NHC) has officially announced the project to build two new satellite towns in Meru and Arusha-Rural Districts where it owns more than 1000 acres of land. In 2011, 430 hectares had been acquired at the cost of TZS 8.6 Billion (USD 5.4 Million) under the newly established firm Arusha District Council Trust Company.

To date, NHC Director General Mr Nehemia Mchechu explained that 600 acres are located in Burka area of Arusha-Rural and 300 acres in Meru District. These areas will provide land for the two proposed satellite towns where feasibility studies have already been undertaken. Mara Group Signs $300 Million Investment in Tanzanian Real Estate.

It includes a 24hour security services with self-contained gate house. The block has an exclusive service of playing ground, a recreation area and ample car park. Intercom and TV ports will be provided. There shall be a facility management office to deal with day to day issues. Upcoming Projects. Four Seasons arrives in Tanzania: safari lodge opens. ~ Friday, 14th December 2012 from 4Hoteliers. Following a rebrand and an extensive upgrade, Four Seasons Safari Lodge Serengeti, Tanzania has officially opened its doors. The Serengeti National Park is considered by many as the best in Africa and is one of Tanzania’s most famous natural wonders. The Lodge is the first Four Seasons in Sub-Saharan Africa and marks the introduction of the brand to the region with two additional properties planned in the Ngorongoro Conservation Area and an exclusive beach resort on the island of Zanzibar. Tanzania is in need of more Hotel investments. The need for competitive hotels Largest safari park in East Africa in great demand for lodges -

TANZANIA (eTN) - Located in the southern highlands of Tanzania, Ruaha National Park, the largest wildlife Eden in East Africa, is almost lacking adequate hotel and accommodation facilities to cater to its tourist inflows. Counted as the wildest safari park and largest protected wildlife park in East Africa, Ruaha covers an area of 20,226 kilometers full of African wildlife, but with less than ten medium-sized lodges to cater to tourists visiting this park. Big hotel chains are contemplating whether or not to enter this attractive park in the southern highlands of Tanzania.

Serena Hotels is looking at possibly to establish a luxury safari lodge in Ruaha, while Tanzania’s local hotel investor, Peacock Hotels is also eyeing this park.