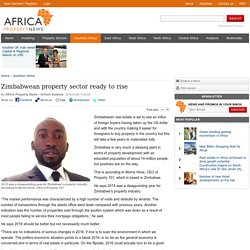 Zimbabwean real estate is set to see an influx of foreign buyers having taken up the US dollar and with the country making it easier for foreigners to buy property in the country but this will take a few years to materialize fully. Zimbabwe is very much a sleeping giant in terms of property development with an educated population of about 14-million people, but positives are on the way. This is according to Morris Hove, CEO of Property 101, which is based in Zimbabwe.

He says 2015 was a disappointing year for Zimbabwe’s property industry. “The market performance was characterized by a high number of voids and defaults by tenants. He says 2016 should be better but not necessarily much better. “There are no indications of serious changes in 2016, if one is to scan the environment in which we operate. “As long as mortgage rates remain on the high side the uptake will go down. New feasibility study for industrial park project. Tinashe Makichi Business Reporter The Zimbabwe Investment Authority (ZIA) will carry out another feasibility study on land earmarked for the construction of an industrial park 5km from the border of Zimbabwe and South Africa in Beitbridge. 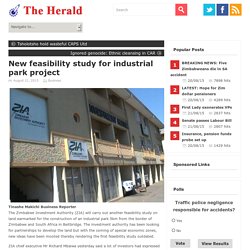 The investment authority has been looking for partnerships to develop the land but with the coming of special economic zones, new ideas have been mooted thereby rendering the first feasibility study outdated. ZIA chief executive Mr Richard Mbaiwa yesterday said a lot of investors had expressed interest in the project but no concrete bids had been made so far. “A new feasibility study should be undertaken as we are awaiting finalisation of the Special Economic Zones framework,” said Mr Mbaiwa. Zimbabwe: CBZ Injects U.S $10 Million Into Housing Scheme. By Fidelity Mhlanga CBZ Holdings has invested US$10,4 million in low-cost housing development in the cities of Gweru and Mutare with plans to extend the scheme to Bulawayo and Kwekwe, an official has said. 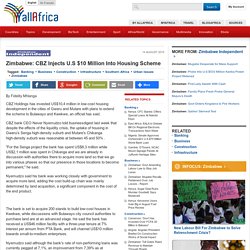 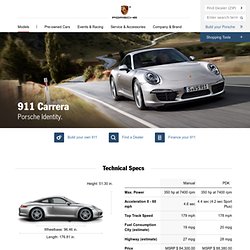 The 911. Our identity. A truly distinctive design. Technology that was born on the race track. Emotional impact that has been standard since 1963. Discover the new Porsche 911 in our web special. Africa: U.S.$300 Million 'Disneyland in Africa' Set for Victoria Falls. Photo: ebel Victoria Falls THE government is planning to set up a US$300-million theme park in Victoria Falls to exploit full potential of the resort town. 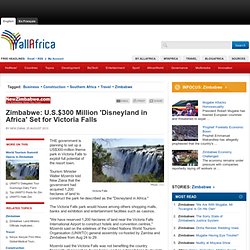 Tourism Minister Walter Mzembi told New Ziana that the government had acquired 1,200 hectares of land to construct the park he described as the "Disneyland in Africa. " The Victoria Falls park would house among others shopping malls, banks and exhibition and entertainment facilities such as casinos. "We have reserved 1,200 hectares of land near the Victoria Falls International Airport to construct hotels and convention centres," Mzembi said on the sidelines of the United Nations World Tourism Organisation (UNWTO) general assembly co-hosted by Zambia and Zimbabwe from Aug 24 to 29.

CABS channels $101m into housing projects. ZIMBABWE’S largest building society by assets and market share, CABS, has since August 2010 approved $101 million housing developments projects as the country’s mortgage financing recovers on the back of improved confidence in the financial services sector, NewsDay has learnt. 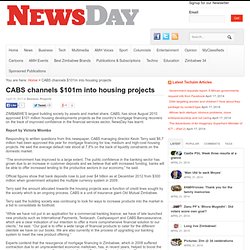 Report by Victoria Mtomba Responding to written questions from this newspaper, CABS managing director Kevin Terry said $6,7 million had been approved this year for mortgage financing for low, medium and high-cost housing projects. Gimboki housing project completed. Harare gets $100 million shopping mall. An artist's impression of the Mall of Zimbabwe. 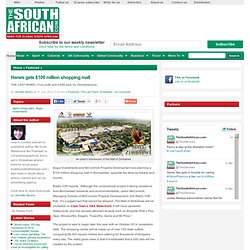 The Mall of Zimbabwe will be modelled on Cape Town’s V&A Waterfront. It will have upmarket restaurants, and has already attracted tenants such as Shoprite, Pick n Pay, Spar, Woolworths, Edgars, Truworths, Game and Mr Price.” The project is said to begin later this year with an October 2014 completion date. The developers told Radio VOP, “While everyone was running away from Zimbabwe, we used our gut feelings to invest. JHI Properties to manage property Portfolio of newly launched Ascendant Property Fund - SA Commercial Property News. 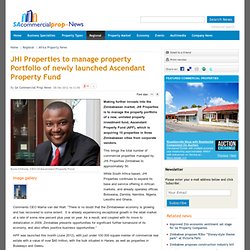 This brings the total number of commercial properties managed by JHI Properties Zimbabwe to approximately 50. While South Africa based, JHI Properties continues to expand its base and service offering in African markets, and already operates offices Botswana, Zambia, Namibia, Nigeria, Lesotho and Ghana. Comments CEO Marna van der Walt: “There is no doubt that the Zimbabwean economy is growing and has recovered to some extent. 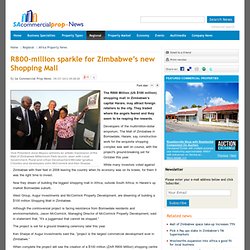 The R800 Million (US $100 million) shopping mall in Zimbabwe’s capital Harare, may attract foreign retailers to the city. They traded where the angels feared and they seem to be reaping the rewards.