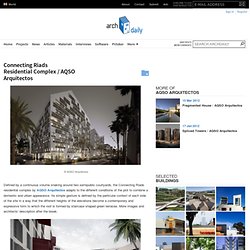 Its simple gesture is defined by the particular context of each side of the site in a way that the different heights of the elevations become a contemporary and expressive form to which the roof is formed by staircase shaped green terraces. More images and architects’ description after the break. The project is located on the east side of Anfa district in Casablanca, a downtown historic area in the vicinity of an old airport to be demolished. The plot is situated between the Gran Theatre boulevard and a residential area composed of low buildings and an urban park. The scheme is solved conceptually as a continuous block aligned to the surrounding streets and wrapping around two big ‘riads’. Social Housing In Paris / Dietmar Feichtinger Architectes. The building is part of a recently developed area in the North of Paris (19th district). 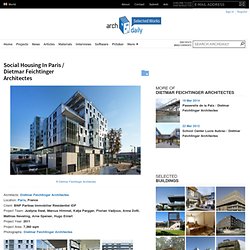 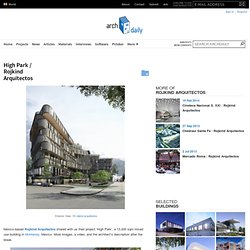 More images, a video, and the architect’s description after the break. High Park is located on the outskirts of the northern city of Monterrey, Mexico. Surrounded by the Majestic Sierra Madre Oriental Range. The project is designed to take full advantage of its geographic location and to help mitigate the extreme climatic conditions. As a recurring design concern for rojkind arquitectos and as a way of integrating the building into the pedestrian realm (giving back to the community), the building steps back to create an outdoor shaded space that can be enjoyed by the residents and visitors alike. Block A Noordstrook / Dick van Gameren architecten. Architect: Dick van Gameren architecten Location: Amsterdam, Netherlands Project team: Dick van Gameren; Paul Vlok; Willmar Groenendijk; Dries van Eijk; Remco van Buuren; Maarten Kemperink; Julien Merle Client: Far West / De Principaal, Amsterdam Contractor: BAM Woningbouw, Amsterdam Structural Engineer: Strackee Bouwadviesburo, Amsterdam Technical Engineer: Huygen Installatie Adviseurs, Rotterdam Project Year: 2009 Photographs: Marcel van der Burg – Primabeeld Block A is the first of three new blocks of buildings that are being built north of Delflandplein in the Amsterdam district of Slotervaart. 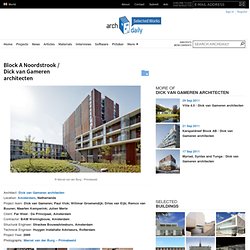 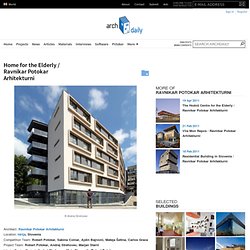 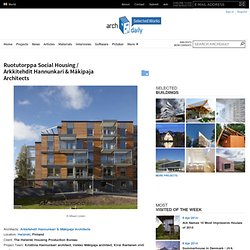 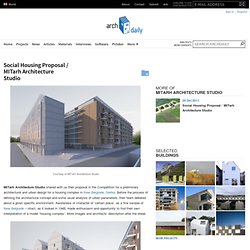 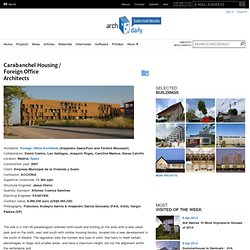 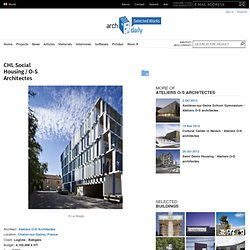 The project stands along Rue Pierre Vaux made up of two volumes of three and four floors. Its corner situation implies a specific work on this urban link.

This housing complex was planned to be built on the site of a crank space with 10m of the frontage and 17m in depth. Due to the regulation for Shinjuku Ward studio apartments, 12 units of the housing complex was planned out including 9 units of less than 30m² of the floor area and 3 units of more than 30 m². Volume Layout and Flow Lines to Maximize the Rental Area The project site has 2m of setback from the property line. Diversity of Dwelling Units Every dwelling unit has been formed to surround the Tree-Shaped void space.

Ninetree Village by David Chipperfield. David Chipperfield designed this luxury housing development located in a small valley, bordered by a dense bamboo forest, near the Qiang Tang River in Hangzhou, China. Twelve individual volumes are arranged in a chessboard pattern to create the maximum amount of open space for each building. The buildings adapt to the topography, creating a flowing landscape through a slight turning of the blocks. All buildings are linked to an underground car park, enabling the site to be free from vehicles above ground. There are six types of building differing in size and floor plan depending on the location, view and light conditions. Each building contain five generously proportioned apartments with approximately 400 square meters.

The floor plan concept creates a flowing interior space defined by solid elements which accommodate auxiliary functions. Via MATERIA Enjoyed this post? Floresta Apartment Complex / Somatic Collaborative. The Floresta apartment complex, designed by Somatic Collaborative, is a 16 unit residential complex that occupies a residual site on the northeastern edge of the city of Quito, Ecuador, overlooking the Guapulo valley. More images and project description after the break. Conceived as an “L” shape in plan, the building is sighted on the two edges adjacent to the streets capitalizing on the stronger soil within the site and defining a clear urban edge.

The ground level is defined by a courtyard containing a swimming pool that cantilevers towards the abyss, and encloses a sunken garden that brings light to the underground parking. The units, varying in size from 160m2 to 240m2 are organized as thin linear strips punctuated by generous terraces that separate the bedrooms from the living and dinning areas.

The Western Terp / LEVS Architecten. Architects: LEVS Architecten Location: Uithuizen, The Netherlands Project Year: 2009 Project Area: 6,350 sqm Photographs: Gerard van Beek Uithuizen is a small village located in the far north of The Netherlands. The village is near the sea and in the midst of the typical Dutch countryside with its panoramic views and farmhouses. In order to prevent this unique scenery from becoming messy, it is imperative that the existing villages are densified. Uithuizen is one of the municipalities where this is necessary. Cvetkova Apartments / Andrej Kalamar. Architect: Andrej Kalamar – Studio Kalamar Location: Murska Sobota, Slovenia Structural Engineering: Igra HVAC Engineering: Veling Electrical Engineering: Mat-El Client: Imo-Real d.o.o. 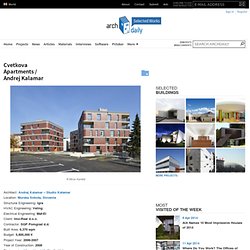 Contractor: SGP Pomgrad d.d. Built Area: 6,370 sqm Budget: 5,800,000 € Project Year: 2006-2007 Year of Construction: 2008 Photographs: Miran Kambič, Studio Kalamar Apartment buildings are located in a redeveloped downtown area that has recently been converted from derelict industrial to public and residential use. Despite its central position in the city, the site is removed from main roads and downtown bustle. River Park Modrany / EDIT! Architects. EDIT! Architects shared with us their design for River Park Modrany, a residential complex in the Modrany district, located in the south of Prague by the Vltava river. The district is typically covered with villas from the beginning of 20th century that surround the Modrany landmark, a 60m high Microna tower. We have divided the plot into strips of land in a perpendicular axis to the main urban lines [tramline, train tracks, main road, the river itself].

A building volume has been placed into every strip and main vertical cores have been defined for all volumes. On The Corner by EASTERN Design Office. Here's an extremely pointy apartment block by Japanese architects EASTERN Design Office. MDW ARCHITECTURE — Residential complex Le Lorrain. © Julien Lanoo . Published on October 24, 2011.

Simpatia Street Housing / gruposp arquitetos. Park Hill estate, Sheffield's notorious landmark, gets £100m revamp. For many people in Sheffield over recent decades, Park Hill was the last place you would want to end up living as a social tenant. Rachel Cooke visits the rejuvenated blocks of Sheffield's Park Hill estate. The following apology was printed in the Observer's For the record column, Sunday November 30 2008 We are happy to record that, contrary to our report of his demise, Jack Lynn, co-architect of Sheffield's Park Hill estate, is very much alive. Apologies to him and to his family. Some children are brought up to love cats and hate dogs, others to adore Manchester United and despise Liverpool.

I was brought up to revere Victorian architecture and to abhor modern buildings. Modern buildings, whatever their vintage, whatever their supposed virtues, were rubbish and that was that. Our terrace was built of local sandstone and, darkened by age and industry, its exterior always reminded me of burnt toast. Myriad, Syntax and Tunga / Dick van Gameren architecten. AD Round Up: Housing Part III.