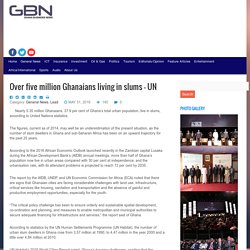 The figures, current as of 2014, may well be an underestimation of the present situation, as the number of slum dwellers in Ghana and sub-Saharan Africa has been on an upward trajectory for the past 25 years. According to the 2016 African Economic Outlook launched recently in the Zambian capital Lusaka during the African Development Bank’s (AfDB) annual meetings, more than half of Ghana’s population now live in urban areas compared with 30 per cent at independence, and the urbanisation rate, with its attendant problems is projected to reach 72 per cent by 2035. “The critical policy challenge has been to ensure orderly and sustainable spatial development, co-ordination and planning, and measures to enable metropolitan and municipal authorities to secure adequate financing for infrastructure and services,” the report said of Ghana. 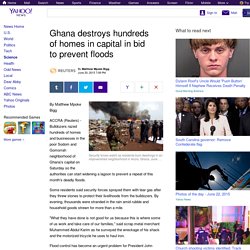 Some residents said security forces sprayed them with tear gas after they threw stones to protect their livelihoods from the bulldozers. By evening, thousands were stranded in the rain amid rubble and household goods strewn for more than a mile. "What they have done is not good for us because this is where some of us work and take care of our families," said scrap metal merchant Muhammed Abdul Karim as he surveyed the wreckage of his shack and the motorized tricycle he uses to haul iron. Flood control has become an urgent problem for President John Mahama's government since more than 50 people drowned in torrents caused by blocked drains on June 3-4, a tragedy that exposed the country's creaking infrastructure. 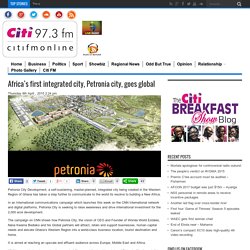 In an International communications campaign which launches this week on the CNN International network and digital platforms, Petronia City is seeking to raise awareness and drive international investment for the 2,000 acre development. Homepage - Petronia City. Bigger is better for Ghana’s malls. The shiny new malls are aimed at middle-class Ghanaians, but also attract big spenders from Nigeria. 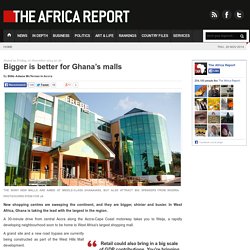 Photo©Chris Stein for JA New shopping centres are sweeping the continent, and they are bigger, shinier and busier. In West Africa, Ghana is taking the lead with the largest in the region. A 30-minute drive from central Accra along the Accra-Cape Coast motorway takes you to Weija, a rapidly developing neighbourhood soon to be home to West Africa's largest shopping mall. Retail could also bring in a big scale of GDP contributions. A grand site and a new road bypass are currently being constructed as part of the West Hills Mall development. The $100m complex will be the second built by the Atterbury Group after the Accra Mall built in 2007, and the South African property developers are upbeat. "We want to create a 'Little Dubai' in Ghana," enthuses Johan Venter, Ghana retail manager for the group. Lamudi Ghana hits 5,000 listings. Lamudi, the global online real estate marketplace, has said it had reached another milestone, hitting the 5,000 listings mark. 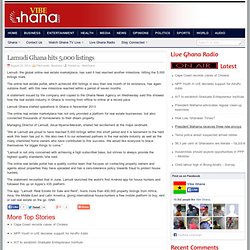 The online real estate portal, which achieved 400 listings in less than one month of its existence, has again outdone itself, with this new milestone reached within a period of seven months. A statement issued by the company and copied to the Ghana News Agency on Wednesday said this showed how the real estate industry in Ghana is moving from offline to online at a record pace.

Lamudi Ghana started operations in Ghana in November 2013. The online real estate marketplace has not only provided a platform for real estate businesses, but also connected thousands of homeowners to their dream property. Welcome to Volta Hotel. Ghana: Retail Space Set For Increased Investment. Africa Investor - Ai News. Friday, 24 May 2013 In the next 16 months Ghana will be home to a US$93million shopping mall which would occupy a area of 27,000 square meters, and house 67 local and international shops. 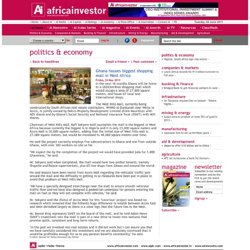 He said the project currently employs five subcontractors in Ghana and one from outside Ghana, with over 300 workers on site so far. Mr. Mr. Mr. West Africa: Ghana to Get Biggest Mall in West Africa By 2014. The people of Ghana have for some time now found it very convenient and safe to do their buying at one-stop destination shopping centers, which has resulted in the few available malls being congested, especially, on holidays. 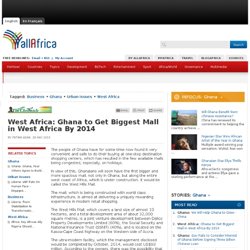 In view of this, Ghanaians will soon have the first bigger and more spacious mall, not only in Ghana, but along the entire west coast of Africa, which is under construction. It would be called the West Hills Mall. The mall, which is being constructed with world class infrastructure, is aimed at delivering a uniquely rewarding experience in modern retail shopping. The West Hills Mall, which covers a land size of almost 10 hectares, and a total development area of about 32,000 square metres, is a joint venture development between Delico Property Developments Limited (60%), the Social Security and National Insurance Trust (SSNIT) (40%), and is located on the Kasoa-Cape Coast highway on the Western side of Accra. Mr. Hope City: 'Africa's tallest building' planned at $10 billion tech hub. Hope City is an ambitious tech project that aims to turn Ghana into a major ICT hub in West Africa. 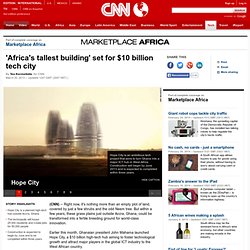 Construction will begin by June 2013 and is expected to completed within three years. The hub will include an assembly plant , an IT university and a hospital, as well as housing and recreation spaces. Accra’s biggest Shopping Mall ready by 2014. Atterbury plans yet another 'biggest shopping mall' worth R900 million (US$96 million) West Hills Mall is on the Cape Coast motorway in west Accra. 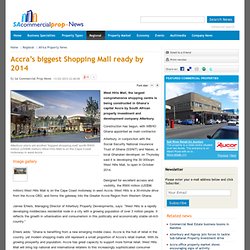 Image gallery. Ghana Real Estate Market promises to Flourish in 2013. An artist's impression of Devtraco Plus' Palmers Place development in Accra, one of their flagship developments in Ghana, which has seven five bedroom luxury townhouses in phase one. 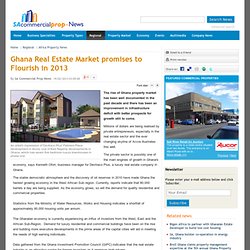 The rise of Ghana property market has been well documented in the past decade and there has been an improvement in infrastructure deficit with better prospects for growth still to come. Millions of dollars are being realised by private entrepreneurs, especially in the real estate sector and the ever changing skyline of Accra illustrates this well. The private sector is possibly one of the main engines of growth in Ghana's economy, says Kenneth Ofori, business manager for Devtraco Plus, a luxury real estate company in Ghana.

IFC Invests in Alliance Estates to Build Protea Hotel in Takoradi, Ghana. Accra, June 28, GNA - International Finance Corporation (IFC), member of the World Bank Group, is providing a 5.45 dollars million loan to Alliance Estates Limited, to build the first Protea hotel at Takoradi. The 132-room three-star hotel if completed will help meet demand for business infrastructure as more investors are venturing into the oil producing area of Takoradi, IFC said in a statement copied Ghana News Agency in Accra on Thursday. It would catalyse local employment as 130 new staff (65 being women) would be hired and trained. Alliance Estates Limited is owned by the Mohinani Group and Capital Alliance Property Investment Company (CAPIC).

Ghana’s economy has been expanding at a high level, with growth touching 13.6 per cent in 2011. At Takoradi, international hotels are limited, despite increased business traffic from investors interested in developing the oil and gas industry. The Protea hotel would be among the first to provide international-standard rooms.