The Pace of Portland. When creative director Ben Watson and his partner, painter Claudio Tschopp, relocated from Basel, Switzerland, to Portland, Oregon, three years ago, they had been told about Portland’s Pearl District, a popular former industrial enclave now brimming with galleries, restaurants, and residential lofts. 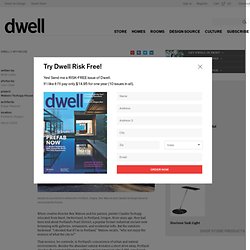 But the outskirts beckoned: “I decided that if I’m in Portland,” Watson recalls, “why not enjoy the essence of what the city is?” That essence, he contends, is Portland’s concurrence of urban and natural environments. Besides the abundant natural wonders a short drive away, Portland also has the largest wilderness within a major American city: 5,000-acre Forest Park. On the edge of this wooded sanctuary, yet just minutes from downtown, Watson and Tschopp found their ideal spot. A Simple Geometric Bayfront Home in Chile. Laurelhurst Studio. Portland, Oregon | Design: PATH Architecture | Construction: Kaiser Group, Inc. 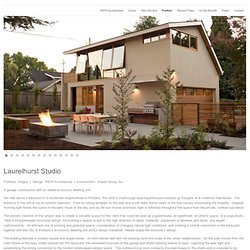 A garage construction with an added accessory dwelling unit. Ten feet above a backyard in a residential neighborhood in Portland, this artist’s studio/yoga space/guesthouse conjures up thoughts of a childhood tree house. The entrance to the unit is via an exterior staircase. Floor to ceiling windows on the east and south walls frame views of the tree canopy surrounding the property.

BSI Swiss Architectural Award 2012 - Studio Mumbai. Sea Ranch concept. Mickey muennig: cooper point house. May 04, 2009 mickey muennig: cooper point house photograph by simon watson 74-year-old green architect mickey muennig is featured in this month’s wall street journal magazine. muennig was been building green-roof architecture for over 30 years in big sur, california. one of his latest eco-buildings is this one on cooper point, covered in a roof of wild grasses. while he has been a long-time eco-architecture practitioner, muennig remains an unsung hero of the green movement. the cooper point house is built into the landscape and features concrete walls on two side and all-glass walls in between. 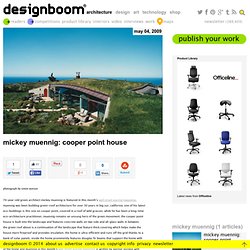 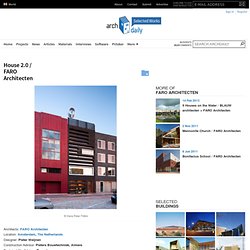 Kerkhofs Montagebouw, Hendrik-Ido-Ambacht Installations: Aitec & Wiessenekker, Rhenen Client: fam. Feikema-Weijnen Area: 230 sqm Year: 2009 Photographs: Hans Peter Föllmi After the success of an energy-efficient residence on Steigereiland, FARO has pushed to a higher level for this second version. Residence 2.0 is energy-neutral and is build according the cradle-to-cradle principles.

The CO2-reduction will be 100%. This CO2 reduction is realized by bringing the house to a passive house level with an insulation value of Rc=10 using triple glazing, 100% liquid-tight joints and heat exchangers. A very large boiler feed water container of 2 m3 provides a large accumulation of energy. Vega Cottage. The house stands on the island of Vega in the Norwegian archipelago not far from the polar circle. 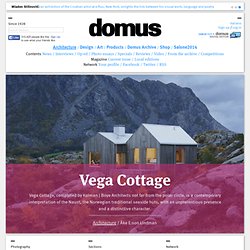 The site is distinctive for its grand and harsh northern landscape with wide panoramas of the Norwegian Sea and the jagged mountains rising from it. Not far from the site, near the ocean shore, stands a group of traditional seaside huts, in Norwegian called Naust, whose forms and materials reflect many years’ experience of building in these conditions. The outermost hut shelters those behind – the huts being placed at odd angles to each other, partly due to topography and partly due to chance. 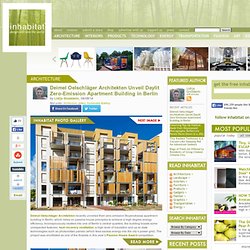 Inconspicuously nestled into one of Berlin’s central quarters, the building boasts some unexpected features: heat recovery ventilation, a high level of insulation and up-to-date technologies such as photovoltaic panels (which feed excess energy into the city’s power grid). The project was shortlisted as one of the finalists in this year’s Passive House Award competition. The 7-story building features triple-glazed windows, a high level of insulation, and it’s practically airtight. The photovoltaics mounted on the roof produce energy primarily for the building, although excess electricity is fed into the public power grid. Energy produced by solar panels power the ventilation system, which is a key ingredient to the building’s energy efficiency. . + Deimel Oelschläger Architekten.