Want to Move Kids Out of Poverty? Then Protect the Middle Class - Jordan Weissmann. A new analysis shows that regions with a healthy middle class also have more upward mobility for the poor. 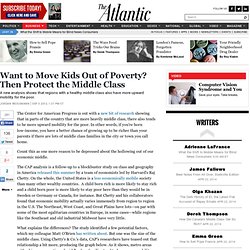 The Center for American Progress is out with a new bit of research showing that in parts of the country that are more heavily middle class, there also tends to be more upward mobility for the poor. In other words, if you're born low-income, you have a better chance of growing up to be richer than your parents if there are lots of middle class families in the city or town you call home. Count this as one more reason to be depressed about the hollowing out of our economic middle. The CAP analysis is a follow-up to a blockbuster study on class and geography in America released this summer by a team of economists led by Harvard's Raj Chetty.

On the whole, the United States is a less economically mobile society than many other wealthy countries. What explains the differences? Chetty's study looked at the relationship between mobility and 28 different factors. Why Local Money Matters: The Middletown Story - James Fallows. The two big lessons my wife and I keep encountering in our travels are these: First, the profound economic and and cultural effect of immigration even in places where you might not necessarily expect that. 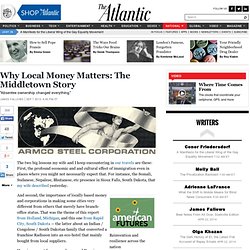 For instance, the Somali, Sudanese, Nepalese, Bhutanese, etc presence in Sioux Falls, South Dakota, that my wife described yesterday. Reinvention and resilience across the nationRead more And second, the importance of locally based money and corporations in making some cities very different from others that merely have branch-office status. That was the theme of this report from Holland, Michigan, and this one from Rapid City, South Dakota -- the latter about an Indian / Congolese / South Dakotan family that converted a franchise Radisson into an eco-hotel that mainly bought from local suppliers. A House Is a Home—Not an Investment - Zachary Karabell. Five years after the collapse of Lehman Brothers and the onset of the 2008-2009 financial crisis, the U.S. housing market is at last starting to thrive. 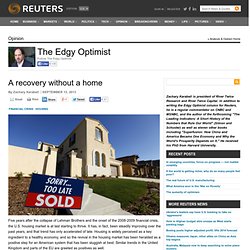 It has, in fact, been steadily improving over the past years, and that trend has only accelerated of late. Housing is widely perceived as a key ingredient to a healthy economy, and so the revival in the housing market has been heralded as a positive step for an American system that has been sluggish at best. Similar trends in the United Kingdom and parts of the EU are greeted as positives as well. But is it? Housing is a key aspect of economic activity in most countries, but that doesn’t mean that we should welcome a return to housing as a perceived pillar of national strength.

Homes are places where you live. There’s no doubt that the economics of the housing market have been steadily improving. These national trends are neither evenly distributed nor certain to continue. It’s an easy path from that belief to outright speculation. The Maddening, Unmoving Economic Gap Between Blacks and Whites - Derek Thompson. Fifty years after Dr. 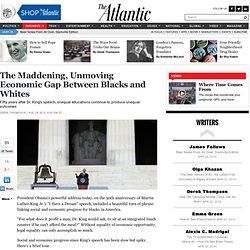 King's speech, unequal educations continue to produce unequal outcomes President Obama's powerful address today, on the 50th anniversary of Martin Luther King Jr.'s "I Have a Dream" speech, included a beautiful turn of phrase linking social and economic progress for blacks in America. "For what does it profit a man, Dr. King would ask, to sit at an integrated lunch counter if he can't afford the meal? " Social and economic progress since King's speech has been slow but spiky. We'll start with the good. Martin Luther King's Economic Dream: A Guaranteed Income for All Americans - Jordan Weissmann. The civil rights leader laid out his vision for fighting poverty in his final book. 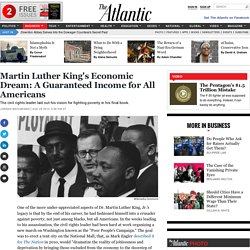 One of the more under-appreciated aspects of Dr. Martin Luther King, Jr.' Where Americans—Rich and Poor—Spent Every Dollar in 2012 - Derek Thompson. Food, clothes, and housing account for more than 60 percent of all spending among the poor. 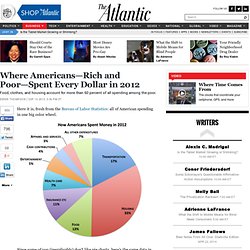 Here it is, fresh from the Bureau of Labor Statistics: all of American spending in one big color wheel. Since some of you (inexplicably) don't like pie charts, here's the same data in bars. Averages are misleading, particularly when the rich are running away from the rest. So, digging deeper into BLS data, I broke out percent spending by category for the richest and poorest 20 percent. The Astonishing Decline of Homelessness in America - Stephen Lurie.

... and why this quiet trend is about to reverse itself Despite a housing crisis, a great recession, rising income inequality, and elevated poverty, there is some good news among the most vulnerable segment of American society. 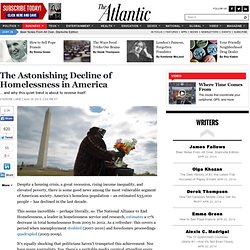 America’s homeless population – an estimated 633,000 people – has declined in the last decade. This seems incredible – perhaps literally, so. The National Alliance to End Homelessness, a leader in homelessness service and research, estimates a 17% decrease in total homelessness from 2005 to 2012. As a refresher: this covers a period when unemployment doubled (2007-2010) and foreclosure proceedings quadrupled (2005-2009). It’s equally shocking that politicians haven’t trumpeted this achievement.