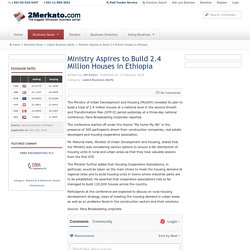 The conference started off under the theme “My home My life” in the presence of 300 participants drown from construction companies, real estate developers and housing cooperative association. Mr. Mekuria Haile, Minister of Urban Development and Housing, stated that the Ministry was considering various options to ensure a fair distribution of housing units in rural and urban areas as that they took valuable lessons from the first GTP.

Ethiopia: 250,000 Condos to Be Built in 20/80 Housing Scheme. By Zelalem Girma The housing scheme has not only been providing affordable houses, but also creating millions of permanent and casual jobs which contributed to the national economy. 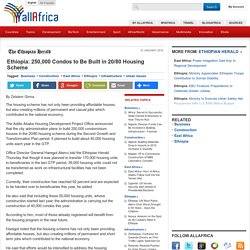 The Addis Ababa Housing Development Project Office announced that the city administration plans to build 250,000 condominium houses in the 20/80 housing scheme during the Second Growth and Transformation Plan period. It planned to build about 40,000 housing units each year in the GTP. Office Director General Haregot Alemu told the Ethiopian Herald Thursday that though it was planned to transfer 170,000 housing units to beneficiaries in the last GTP period, 39,000 housing units could not be transferred as work on infrastructural facilities has not been completed. Currently, their construction has reached 92 percent and are expected to be handed over to beneficiaries this year, he added. International Real Estate and Construction Exhibition, Addis Ababa. 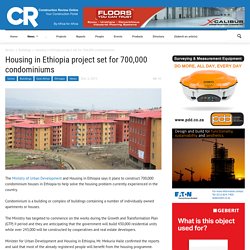 Condominium is a building or complex of buildings containing a number of individually owned apartments or houses. Ethiopia To Build 80,000 Housing Units Within 18 Months - Footprint to Africa. Ethopia has finalised plans to build 80,000 housing units within 18 months to close the housing gap in the country. 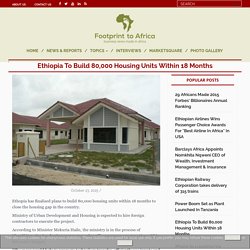 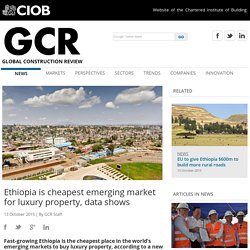 Top end real estate there costs around $448 per square metre, while luxury property in Angola is ten times more expensive, at over $4,500 per square metre, data from property portal Lamudi shows. Africa’s second most populous country, Ethiopia is also one of Africa’s top economic performers: its economy is expected to expand 8.6% this year and 8.5% in 2016, compared with 10.3% growth last year, the International Monetary Fund said in April. GCR - News - 21-tower scheme to be Ethiopia’s ‘biggest real estate project’ says Chinese developer.

A Chinese developer says it will build a 21-tower development that will “change the face” of the Ethiopian capital, Addis Ababa. 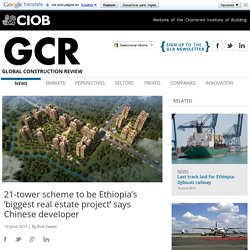 The news comes in a period of high growth for Africa’s second most populous country, whose government has just proposed a budget that is 20% higher than last year to fund development. The scheme will cost $194m (4bn birr), and each of the 21 towers will have more than 20 storeys, Ethiopian News Agency (ENA) reported. Ethiopia scrambles to meet property demand in booming capitalNaija247news. A property boom in Ethiopia’s capital is putting pressure on the government to keep homes affordable for some of Africa’s poorest people who also live in one of its fastest-growing economies. 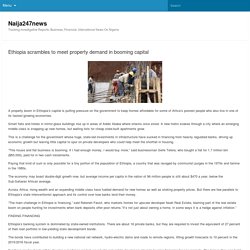 Smart flats and hotels in mirror-glass buildings rise up in areas of Addis Ababa where shacks once stood. A new metro snakes through a city where an emerging middle class is snapping up new homes, but waiting lists for cheap state-built apartments grow. This is a challenge for the government whose huge, state-led investments in infrastructure have sucked in financing from heavily regulated banks, driving up economic growth but leaving little capital to spur on private developers who could help meet the shortfall in housing. “This house and flat business is booming. If I had enough money, I would buy more,” said businessman Seife Tefera, who bought a flat for 1.7 million birr ($83,000), paid for in two cash instalments. Ethiopia: Road Infrastructure in Addis Outskirts Catalyst for Condo Construction - AACRA.

By Leulseged Worku AACRA (the Addis Ababa City Roads Authority) said that road construction and expansion projects in the outskirts of the City are facilitating condo construction. 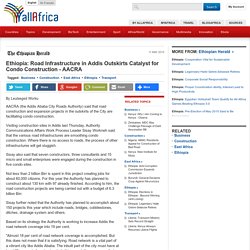 Visiting construction sites in Addis last Thursday, Authority Communications Affairs Work Process Leader Sisay Workneh said that the various road infrastructures are smoothing condo construction. Where there is no access to roads, the process of other infrastructures will get sluggish. Sisay also said that seven constructors, three consultants and 15 micro and small enterprises were engaged during the construction in five condo sites. Not less than 2 billion Birr is spent in this project creating jobs for about 60,000 citizens. Sisay further noted that the Authority has planned to accomplish about 150 projects this year which include roads, bridges, cobblestones, ditches, drainage system and others. Based on its strategy the Authority is working to increase Addis the road network coverage into 19 per cent. 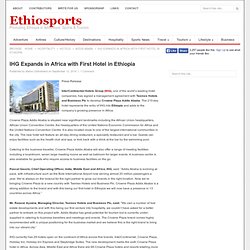 The 210-key hotel represents the entry of IHG into Ethiopia and adds to the company’s growing presence in Africa. Crowne Plaza Addis Ababa is situated near significant landmarks including the African Union headquarters, African Union Convention Centre, the headquarters of the United Nations Economic Commission for Africa and the United Nations Convention Centre. It is also located close to one of the largest international communities in the city. The new hotel will feature an all-day dining restaurant, a speciality restaurant and a bar. Catering to the business traveller, Crowne Plaza Addis Ababa will also offer a range of meeting facilities including a boardroom, seven large meeting rooms as well as ballroom for larger events. Mr. Poli Lotus International Center, Ethiopia’s first urban complex. Addis Ababa, Ethiopia – Poli Lotus International Center, the first urban complex project in Ethiopia developed by Chinese investment, was opened on Monday in Ethiopia’s capital Addis Ababa. 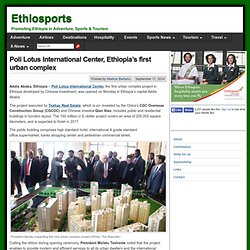 The project executed by Tsehay Real Estate, which is co- invested by the China’s CGC Overseas Construction Group (CGCOC) and Chinese investor Qian Xiao, includes public and residential buildings in function layout. The 150 million-U.S. -dollar project covers an area of 200,000 square kilometers, and is expected to finish in 2017. The public building comprises high standard hotel, international A grade standard office,supermarket, banks shopping center and pedestrian commercial street. President Mulatu inspecting the new urban complex project (Photo: The Reporter) Cutting the ribbon during opening ceremony, President Mulatu Teshome noted that the project enables to provide modern and efficient services to all its urban dwellers and the international community at large.

Source: Xinhua. GEESKA AFRIKA ONLINE The Horn of Africa Intelligence News Group » Ethiopia: Addis Ababa satellite towns will be 8.1 million. Addis Ababa (HAN) August 5, 2014 – Infrastructure and Development News, By William Davison, bloomberg. Ethiopia, Africa’s fastest-growing economy, is looking to its capital to help sustain an expansion that averaged more than 10 percent a year in the past decade. Planners predict the population of Addis Ababa and five satellite towns will more than double by 2040 to 8.1 million, highlighting United Nations estimates that Africa’s global share of urban dwellers will double to 20 percent in the next 35 years.

LiveInEthiopia was released in the beginning of 2010 to take the rather chaotic Ethiopian Real Estate Industry – the renting, buying and selling part – to a different and modern level. It had a different business model then; it used to collaborate with the realtors, traditionally known as "Delalas", on all levels. It used to advertise the properties, negotiate with customers and was directly involved in the business. It was not successful because of the acute lack of transparency in the sector. The website was still running; however, it was not updated at all. Homenet Ethiopia, owned by Girum, has already started publishing information of the properties under its responsibility on LiveInEthiopia.com.