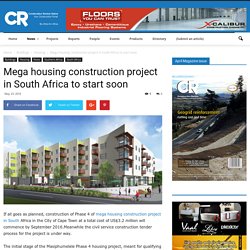 The initial stage of the Masiphumelele Phase 4 housing project, meant for qualifying applicants residing in Masiphumelele backyards and the informal settlement which is located in the wetland, will see the construction of 227 fully serviced sites on which subsidised units will be constructed at a later stage. Phase 2 of the project, comprising of 96 fully serviced sites and subsidised houses, will be undertaken at a later stage. A total of US$3.2 million has been set aside for the first and second phases and if all goes as planned, the civil services for stage one will be built in the period between September 2016 and June 2017, while the phase one houses will be constructed between July 2017 and June 2018. Mall of Africa opens on 28 April 2016. Record Listing Brings Luster, Media Attention To Soweto Real Estate. The property market in Soweto, South Africa’s largest township, is booming, and a recent record-breaking listing of a luxury home there is attracting all kinds of media attention. 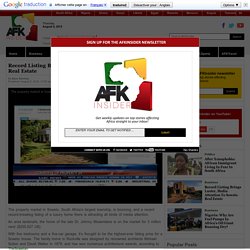 An area landmark, the home of the late Dr. Johnny Mosendane is on the market for 3 million rand ($235,527 US). With five bedrooms and a five-car garage, it’s thought to be the highest-ever listing price for a Soweto house. Cape-luxury-homes-cheap-at-the-price-1.1880439# INDEPENDENT MEDIA Clifton is an exclusive area where some of the most expensive real estate in South Africa can be located. 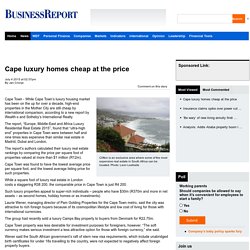 Photo: Leon Lestrade Cape Town - While Cape Town’s luxury housing market has been on the up for over a decade, high-end properties in the Mother City are still cheap by international comparison, according to a new report by Wealth-x and Sotheby’s International Realty. The report, “Europe, Middle-East and Africa Luxury Residential Real Estate 2015”, found that “ultra-high end” properties in Cape Town were between half and nine times less expensive than similar real estate in Madrid, Dubai and London.

The report’s authors calculated their luxury real estate rankings by comparing the price per square foot of properties valued at more than $1 million (R12m). Cape Town was found to have the lowest average price per square foot, and the lowest average listing price for such properties. SA's richest people live … where? The taxpayers in the tiny Northern Cape municipality of Gamagara, home of the Sishen iron ore mine and camel thorn trees, and eMalahleni, in the heart of the Mpumalanga coal mining area, earn among the highest average incomes in the country – more than people living in much bigger municipalities such as Cape Town and Durban. 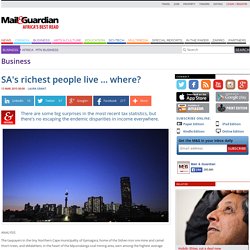 Those in Gamagara and eMalahleni earned an average taxable income of between R250 000 and R320 000 a year, according to data released by the treasury and the South African Revenue Service for the 2013 tax year, the latest figures available. Six municipalities made it into that average taxable income bracket and the big surprise was that Cape Town wasn’t one of them.

Its taxpayers averaged R242 000 a year, but they were still beaten into ninth place by two other mining municipalities, Steve Tshwete (formerly Middelburg) in Mpumalanga and Mogale City in Krugersdorp. South Africa’s top suburbs for luxury homes. Work on “capital of Africa” gets underway. South African real estate attracting foreign investors in big numbers. Foreigners bought nearly Rand 9.7 billions (US$ 867 million) of luxury properties in South Africa the past 12 months. 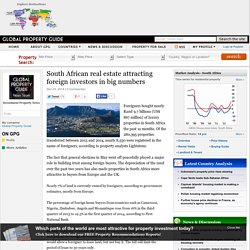 Of the 280,395 properties transferred between 2013 and 2014, nearly 8,530 were registered in the name of foreigners, according to property analysts Lightstone. The fact that general elections in May went off peacefully played a major role in building trust among foreign buyers. San Diego Source > Real Estate > Malls rise as South African townships boom. SOWETO -- The purple silk evening gown with glittering beads at the neck was perfect for the high-school prom. 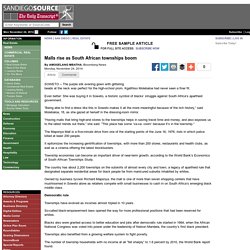 Kgatlhiso Molebaloa had never seen a finer fit. Even better: She was buying it in Soweto, a historic symbol of blacks’ struggle against South Africa’s apartheid government. US$67m trio of new A-grade offices to go up in Africa’s only green city - Construction Review Online. Already home to leading companies like BMW, Nedbank and SAGE VIP, the multi-billion rand Menlyn Maine green city development in Pretoria is set to get 26,500sqm of new office space in three new buildings from the end of 2015 to the end of 2016. 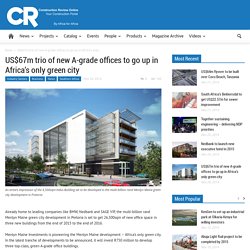 Menlyn Maine Investments is pioneering the Menlyn Maine development – Africa’s only green city. In the latest tranche of developments to be announced, it will invest R750 million to develop three top-class, green A-grade office buildings. Building a Boston in Cape Town: $13 Billion Dream Rises From Ashes of Apartheid.

David Pearson has a vision: a new community of 800,000 -- bigger than Boston -- complete with factories, schools, clinics and a university that will help erase the legacy of apartheid in Cape Town. 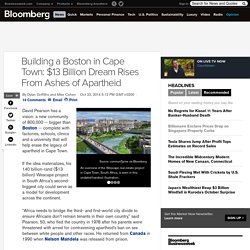 If the idea materializes, his 140 billion-rand ($13 billion) Wescape project in South Africa’s second-biggest city could serve as a model for development across the continent. “Africa needs to bridge the third- and first-world city divide to ensure Africans don’t remain tenants in their own country,” said Pearson, 50, who fled the country in 1978 after his parents were threatened with arrest for contravening apartheid’s ban on sex between white people and other races.

He returned from Canada in 1990 when Nelson Mandela was released from prison. Planning for growth is urgent because Africa’s urban population is forecast by the United Nations to expand fourfold to 1.34 billion by 2050. Global Appeal. Realty Africa Property Crowdfunding. SA property firm targets growing retailer interest in Kenya. South African property management firm Broll has entered the Kenyan market in an effort to benefit from the growing number of foreign retailers seeking space to conduct business in the East African country Fellow South African firm Game is among the foreign retailers seeking space in Kenya after it confirmed that it would become a tenant in Garden City Mall on the outskirts of Nairobi. 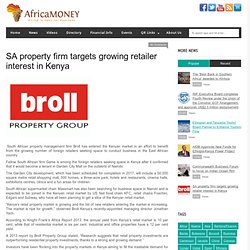 The Garden City development, which has been scheduled for completion in 2017, will include a 50,000 square metre retail shopping mall, 500 homes, a three-acre park, hotels and restaurants, cinema halls, exhibitions centres, clinics and a fun areas for children. South African supermarket chain Massmart has also been searching for business space in Nairobi and is expected to be joined in the Kenyan retail market by US fast food chain KFC, retail chains Foschini, Edgars and Subway, who have all been planning to get a slice of the Kenyan retail market. Image Source: www.seeklogo.com Source: African Review. Transforming downtown Johannesburg. A city on Joburg’s doorstep? - Property. JOHANNESBURG – A small city could be developed on Johannesburg’s doorstep following the sale of AECI’s Modderfontein surplus property assets in Gauteng to Chinese developer Shanghai Zendai. 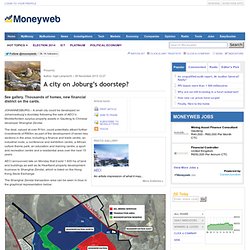 The deal, valued at over R1bn, could potentially attract further investments of R80bn as part of the development of seven key sections in the area, including a finance and trade centre, an industrial node, a conference and exhibition centre, a African culture theme park, an education and training centre, a sport and recreation centre and a residential area over the next 15 years. AECI announced late on Monday that it sold 1 600 ha of land and buildings as well as its Heartland property development business to Shanghai Zendai, which is listed on the Hong Kong Stock Exchange.

Industrial gas companyA business entity registered in terms of the Companies Act 61 of 1973 which can, for example, conclude agreements of sale or leases in its name. , Air Products South Africa, is also about to begin construction of its R300-million state-of-the-art air separation unit in Zone 3 in July, bringing the total number of projects being built to seven. “Everything is on track, with timeframes tight but on target to be met. R180m airport hotel ‘greenest in Africa’ Billion Group drives expansion outside South Africa.

Billion and Rebosis CE Sisa Ngebulana said on Friday that Billion was undertaking 12 retail shopping centre developments between Angola, Ghana, Nigeria and Uganda, which would each be between 25,000m² and 40,000m² in size. The Billion Group, a property developer is undertaking 12 retail shopping centre developments in Africa in an effort to expand its footprint and diversify its income away from a single economy. Billion Group is the asset manager of JSE-listed Rebosis Property Fund and has several significant developments under way in South Africa. Africa's Priciest Home: What $33M Gets in Cape Town. Tweet Facebook LinkedIn Google Plus Email Play May 10 (Bloomberg) -- The most expensive homes in South Africa are not only above pre-crisis prices, they're still going up thanks in part to the emergence of wealthy buyers from the continent's oil-rich countries.

Ryan Chilcote reports. (Source: Bloomberg) Over 400,000 houses to be delivered. Mon Apr 21 17:21:53 SAST 2014 Over 400,000 additional low-income houses will be built by 2016, according to the 2013/14 Budget documents tabled in the National Assembly. Transfers of funds would be made to provinces and municipalities through grants to accelerate the delivery of such housing and basic services to households. These transfers would allow for an additional 409,143 houses and upgrades to over 198,000 sites in informal settlements over the medium-term. "The projected growth in the delivery of low-income houses is slower than the projected growth in expenditure over the medium-term due to increasing construction costs and a shift in focus towards providing access to secure tenure and basic services," the document states.