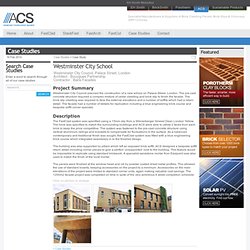 The pre-cast concrete structure required a complex mixture of cedar cladding and brick slip to finish the facade. The brick slip cladding was required to face the external elevations and a number of soffits which had a return detail. The facade had a number of details for replication including a blue engineering brick course and bespoke soffit corner specials. Description The FastClad system was specified using a 15mm slip from a Wienerberger Smeed Dean London Yellow. The building was also supported by pillars which left an exposed brick soffit. The panels were finished at the window head and cill by powder coated sheet metal profiles. Click on photos to enlarge.

The Triangle / The Housing Design Awards. Architect Glenn Howells Architects Developer Hab Oakus Contractor Willmott Dixon Planning Authority Swindon Borough Council Click on an image below for a larger view Hab Oakus is partly the development vehicle of Kevin McCloud, the TV presenter who made enough from filming self-build as drama to risk a crack at speculative development. 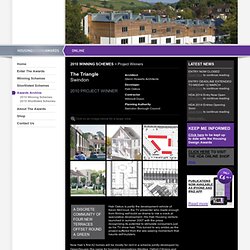 Now Hab’s first 42 homes will be mostly for rent in a scheme jointly developed by GreenSquare (the name for housing associations Westlea, Oxford Citizens and their commercial arm Oakus). April 2010 saw work start on the 0.8 ha backlands site in Swindon wrapped by Victorian terraces and pre-war semis with deep rear gardens. Treatment of the circular access road serving each home is fundamental to the success of the scheme. Houses will be built to the upper levels of HCA’s legacy of standards, topped up to Code Level 4 with environmental performance boosting kit, notably triple glazing, air source heat pumps and grey water recycling. North London Hospice AHMM - ALLFORD HALL MONAGHAN MORRIS. 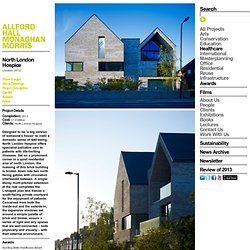 Set on a prominent corner in a quiet residential area of north London, the massing of this brick building is broken down into two north facing gables with circulation interleaved between. A single-storey multi-pitched extension at the rear completes the L-shaped plan and frames a south-facing private courtyard for the enjoyment of patients. Archithetics - Photos du journal. Architects Vote for London Hospice in 2012 Brick Awards ~ Architects Datafile News.

Brick Awards: A new category in the annual Brick Awards, the Architect’s Choice Award, was won by the North London Hospice, at a ceremony held at the Marriott Grosvenor Square Hotel in London on 13th November. 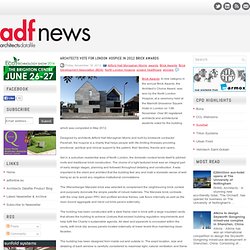 Over 80 registered architects and architectural students voted for the building which was completed in May 2012. Designed by architects Allford Hall Monaghan Morris and built by brickwork contractor Pavehall, the hospice is a charity that helps people with life-limiting illnesses providing emotional, spiritual and clinical support to the patient, their families, friends and carers. Set in a suburban residential area of North London, the domestic context lends itself to pitched roofs and traditional brick construction. The choice of a light textured brick was an integral part of early design stages, planning and followed throughout detailing and construction. The building has been designed from inside out and outside in. PREFAB FRIDAY: Michelle Kaufmann’s mkHearth. We always love seeing hot designers come out with their next hit– and Michelle Kaufmann’s new mkHearth is the latest in must-have prefab design. 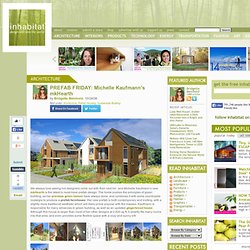 The home pushes the principles of green building, as her previous green homes have always done, and combines it with some countryside nostalgia to produce a prefab farmhouse. Her new prefab is both contemporary and inviting, with a slightly more traditional aesthetic which will likely prove popular with the masses. Kaufmann is responsible for many advances in green building, as well as an updated gingerbread house. Although this house is larger than most of her other designs at 2,820 sq ft, it smartly fits many rooms into that area, and even provides some flexible space with a cozy and sunny loft. 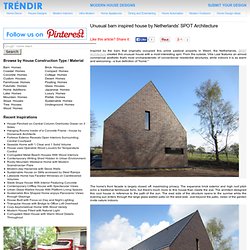 Share it: Inspired by the barn that originally occupied this prime pastoral property in Weert, the Netherlands, SPOT Architecture created this unusual house with a most interesting spin. From the outside, Villa Laar features an almost commercial aesthetic that's most uncharacteristic of conventional residential structures, while indoors it is as warm and welcoming - a true definition of "home.

" The home's front facade is largely closed off, maximizing privacy. The expansive brick exterior and high roof pitch echo a traditional farmhouse form, but there's much more to this house than meets the eye. Inside, more of that barn influence shines through with exposed wood beams and an open vaulted ceiling topped by skylights, flooding interiors with natural light while extending sightlines up as far as the eye can see.