Angola - Owners of Real Estate Flock to Urban Property Tax Payment. AccorHotels group manages first hotel in Angola. November 10th, 2016 Home Angola The Ibis Styles Iu Hotel, the first hotel in Angola to be managed by international chain Accor, was opened on Wednesday in Luanda, in the Talatona neighborhood, through an investment by the AAA Activos company started in 2007, the Angolan press reported. 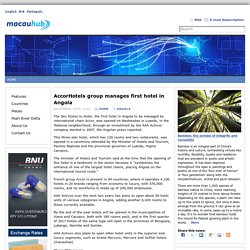 This three-star hotel, which has 120 rooms and two restaurants, was opened in a ceremony attended by the Minister of Hotels and Tourism, Paulino Baptista and the provincial governor of Luanda, Higino Carneiro. The minister of Hotels and Tourism said at the time that the opening of this hotel is a landmark in the sector because it “symbolises the entrance of one of the largest hotel chains, placing Angola on the international tourist route.”

Urbanising Angola, one housing project at a time. Kora Angola is working in partnership with the Angolan Government to construct 40,000 affordable, high-quality housing units across 15 Angolan municipalities and 6 provinces, including one of its most ambitious undertakings, the Horizonte Housing Project Kora Angola is one of the country’s main players in the push for urbanisation. 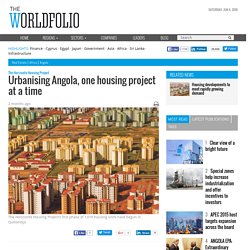 As a semi-private real estate company, its goal is to develop sustainable infrastructure and real estate initiatives that meet the needs of the local population, large swathes of which remain isolated in rural areas, far from the resources and opportunities that could dramatically help rebuild their lives. Angola Magazine - Regras da cidade do Sequele. AIM - Angola Imobiliário Magazine: Dez2014 by Paulo Cruz. Angola’s $7 Billion Waterfront Project Stalks Hilton Hotels. Builders of a $7 billion waterfront development in Angola’s capital, Luanda, are seeking to attract an international hotelier such as Hilton Worldwide Holdings Inc. 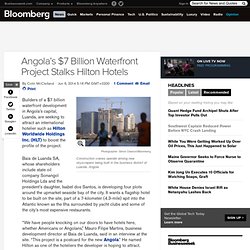 (HLT) to boost the profile of the project. Baia de Luanda SA, whose shareholders include state oil company Sonangol Holdings Lda and the president’s daughter, Isabel dos Santos, is developing four plots around the upmarket seaside bay of the city. It wants a flagship hotel to be built on the site, part of a 7-kilometer (4.3-mile) spit into the Atlantic known as the Ilha surrounded by yacht clubs and some of the city’s most expensive restaurants. “We have people knocking on our doors to have hotels here, whether Americans or Angolans,” Mauro Filipe Martins, business development director at Baia de Luanda, said in an interview at the site. “This project is a postcard for the new Angola.” Light trails from passing traffic illuminate the promenade at night beneath a construction crane in Luanda, Angola. Close Open Attract Investors. Luanda vai ter novo centro comercial - Portal de Angola. 中国德瑞集团 China Dreal Group. Imperial Garden is a quality comprehensive real estate project developed in 2014 by Mar Grandioso Real Estate and Construction Corporation, Angola, a subordinate company of China Dreal Group. 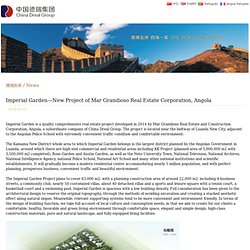 The project is located near the beltway of Luanda New City, adjacent to the Angolan Police School with extremely convenient traffic condition and comfortable environment. The Kamama New District whole area to which Imperial Garden belongs is the largest district planned by the Angolan Government in Luanda, around which there are high-end commercial and residential areas including KK Project (planned area of 5,000,000 m2 with 3,500,000 m2 completed), Rose Garden and Austin Garden, as well as the Neto University Town, National Television, National Archives, National Intelligence Agency, national Police School, National Art School and many other national institutions and scientific establishments.

Perspective of business streets Perspective of detached villas Reported on March 15th, 2014. ZREport_Angola-Property-Market-2013-EN.pdf. Real_Estate_2012.pdf. Lunda Sul Province to gain four more hotels. Around 65,000 houses built in Angola in 2013. December 13th, 2013 News Around 65,000 houses were built in Angola in 2013, as part of the National Urbanism and Housing Programme, the Minister for Urbanism and Housing, José da Silva said Tuesday. 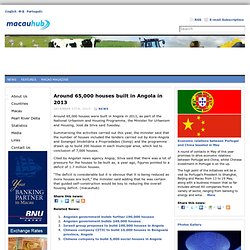 Summarising the activities carried out this year, the minister said that the number of houses included the tenders carried out by Kora-Angola and Sonangol Imobiliária e Propriedades (Sonip) and the programme drawn up to build 200 houses in each municipal area, which led to conclusion of 7,000 houses. Cited by Angolan news agency Angop, Silva said that there was a lot of pressure for the houses to be built as, a year ago, figures pointed to a deficit of 1.7 million houses. “The deficit is considerable but it is obvious that it is being reduced as more houses are built,” the minister said adding that he was certain that guided self-construction would be key to reducing the overall housing deficit.

Related News: Angola’s Middle Class Clamors for Housing Amid Oil Boom. Guilhermina Simoes, a manager at Banco Bic SA in Angola, sat on a stool in the midday heat with a knapsack as she planned to camp overnight and beat the Monday morning crowd to buy a new apartment. 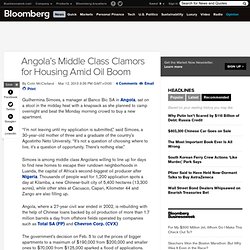 “I’m not leaving until my application is submitted,” said Simoes, a 30-year-old mother of three and a graduate of the country’s Agostinho Neto University. Casas T3 das novas centralidades poderão ser adquiridas Jornal da Hora. Kilamba Kiaxi, outside Luanda Angola, from ghost town to hot property. Chinese and Angolan workers build 11,000 homes in Quilemba, Angola. April 2nd, 2013 News The first 3,000 homes of a planned 11,000 that Chinese company Citic Construction is building in Quilemba, on the outskirts of the city of Lubango, in Angola’s Huíla province, are due to be finished in June, a director of Angolan company Sonangol Imobiliária e Propriedades (Sonip) said. 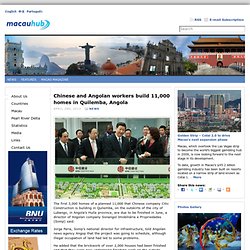 Jorge Faria, Sonip’s national director for infrastructure, told Angolan news agency Angop that the project was going to schedule, although illegal occupation of land had led to some problems. He added that the brickwork of over 2,000 houses had been finished and that they were now undergoing finishing work on the outside. Angola Magazine - Reabilitações na cidade do Mbanza Kongo (Zaire) 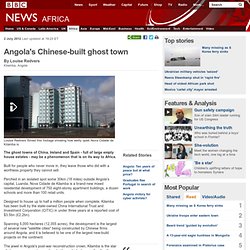 Built for people who never move in, they leave those who did with a worthless property they cannot sell. Perched in an isolated spot some 30km (18 miles) outside Angola's capital, Luanda, Nova Cidade de Kilamba is a brand-new mixed residential development of 750 eight-storey apartment buildings, a dozen schools and more than 100 retail units. Designed to house up to half a million people when complete, Kilamba has been built by the state-owned China International Trust and Investment Corporation (CITIC) in under three years at a reported cost of $3.5bn (£2.2bn). Continue reading the main story “Start Quote. Nova Baía de Luanda. HOUSING ANGOLA. Kilamba Kiaxi 1.