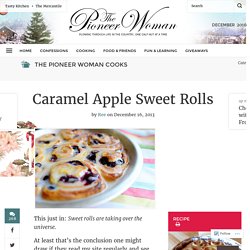 At least that’s the conclusion one might draw if they read my site regularly and see the constant stream of variations on my original Cinnamon Roll recipe. On this website, I have approximately six thousand variations of sweet rolls—everything from Blueberry Lemon Sweet Rolls (above) to Pumpkin Cinnamon Rolls, and everything in between. Orange-Marmalade Rolls. I’m still glowing from the memories of a weekend of delicious baking with Smitten Kitchen, the ultra sophisticated, pregnant New Yorker who took time out of her schedule to visit the ranch for a couple of days. 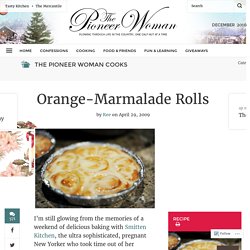 We had a rip-roaring time meeting several visitors Saturday while Deb demonstrated the art of making crumb cake, soft bagels, and pumpernickel bread. This left Sunday for us not only to digest our carbs, but to bake whatever we wanted. Bagels were first on the list. They were sublime. I’m never buying bagels again, not that I ever did since I live in Small Town, America. After the bagels, I decided to have a leetle fun with my New York visitor. I decided to make her a batch of my cinnamon roll dough…and turn her loose with it. I won’t tell you everything she did… (I’ll let her fill you in on all the details…) Pumpkin Cinnamon Rolls. We all know about the original cinnamon rolls. 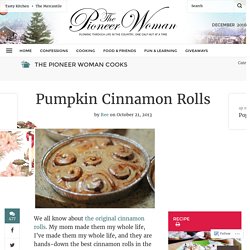 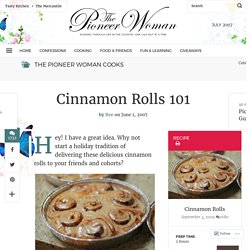 I have a great idea. Why not start a holiday tradition of delivering these delicious cinnamon rolls to your friends and cohorts? Growing up, my mom always made them for her good friends at Christmastime, and you could literally hear the primal groans of pure joy rising from the rooftops of our town. I’ve carried on the tradition through the years and have won friends and influenced people just by delivering these rolls. They really are that good. ***This is the original Cinnamon Roll recipe! Let’s start by making the dough. Mix 1 quart of whole milk, 1 cup of vegetable oil, and 1 cup of sugar in a pan. When the mixture is lukewarm to warm, but NOT hot, sprinkle in 2 packages Active Dry Yeast. Let this sit for a minute so the yeast gets all warm and moist and happy. Then add 8 cups of all-purpose flour. Stir mixture together. After an hour, the dough will look like this. 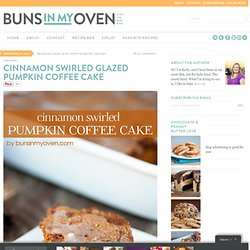 I’ve really gone and done it now. I went and married coffee cake with pumpkin pie and the result was, well, it was phenomenal. I like cake just fine, but I absolutely adore the texture of pumpkin pie. The dense, creamy filling is my happy place. So, I got a little crazy and added a ridiculous amount of pumpkin to this cake in the hopes that I could recreate a bit of that custard like texture while still being able to call it a cake. I don’t want to brag or anything, but I would totally rock at being a scientist. This cake is outrageously good. Oh, and just for fun? Try this one and let me know what you think! Never miss out on a single recipe! Facebook | Twitter | Pinterest | Instagram |Google+ | RSS | Email Newsletter Print Save Prep Time: 20 minutes Cook Time: 45 minutes Total Time: 65 minutes Ingredients: Directions: To make the cake: Preheat oven to 350°F. 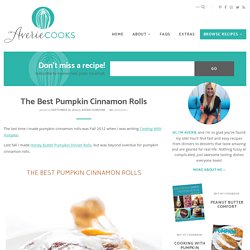 Last fall I made Honey Butter Pumpkin Dinner Rolls, but was beyond overdue for pumpkin cinnamon rolls. And these are the best pumpkin cinnamon rolls I’ve ever made. I prefer these over Cinnabon, and that’s a big statement coming from a former Cinnabon junkie. They’re soft, light, fluffy and there’s just enough pumpkin flavor to notice, but not so much that it overwhelms the inherent beauty of classic cinnamon rolls. Topped with cream cheese glaze, they’re totally irresistible. I have a habit of donating most of what I bake after my family has a bite or a piece since we don’t need entire cakes, multiple pans of bars, and dozens of cookies, every week.