Parmesan Chiffon Cake - Easy Recipes at RasaMalaysia.com. Table for 2.... or more: Oreo Chiffon Cake. I wanted to try out this new pan that I’ve got. 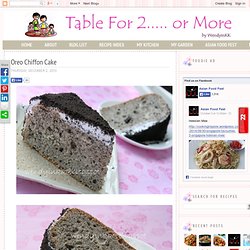 I didn’t know what this pan was for, but the curved base attracted me to buy this. So, the day before I made this, I looked and looked at the pan, wondering if I can invert it after baking, the removable base was small and in the middle only and with a curved base, I can scrape the sides of the cake if I can’t get it out, and with a removable base, there won’t be condensation problems… Hmm.. so what chiffon flavours can I try out this time? I lazy to get out and buy stuff.. Yeah!!! True enough, yup, the chiffon cake stayed put, and here’s how it looked like after I got it out from the pan. I then decided to mask its ugliness by giving it some makeup. Oreo Chiffon Cake Recipe Adapted from CherryPotato (A) 65gm oreo (half a regular tube), lightly pulverized together with cream (B) 5 egg yolks 50gm sugar 60gm milk 60gm corn oil 100gm cake flour, sifted (C ) 5 egg whites ½ tsp cream of tartar or 1 tsp lemon/lime juice 60gm sugar 1. 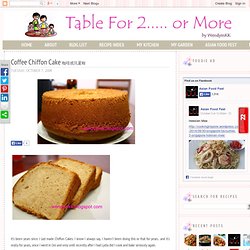 I know I always say, I haven't been doing this or that for years.. and it's really for years, since I went in Uni and only until recently after I had Lydia did I cook and bake seriously again. My first chiffon cake, a pandan chiffon cake was as a birthday cake for my Mom... way back in 1997. It was a last minute thingy.. I called up my dear fren Kah Hoe for the recipe, and the cake was done in less than 2 hours (shopping, baking, cooling, cutting)... and just in time for my mom to came back from work.. She was really happy! Orange Chiffon Cake Recipe. Orange Chiffon Cake: Separate the eggs while they are still cold. 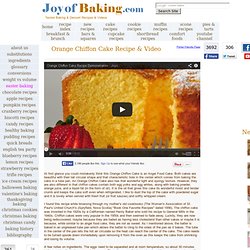 Place the egg yolks in one bowl and the whites (along with the extra egg white) in another. Cover with plastic wrap and bring to room temperature (about 30 minutes). Preheat the oven to 325 degrees F (170 degrees C) and have ready a 10 inch (25 cm) two piece ungreased tube pan. In the bowl of your electric mixer, fitted with the paddle attachment, (or use a hand mixer) place the flour, sugar (minus 1/4 cup (50 grams)), baking powder, salt, and orange zest. Beat until combined. In a separate bowl, with the whisk attachment, beat the egg whites until foamy. Pour the batter into the ungreased tube pan and bake for about 55 to 60 minutes, or until a wooden skewer inserted into the center of the cake comes out clean.

To remove the cake from the pan, run a long metal spatula around the inside of the tube pan and center core. Serves 8-10 people. Pandan Chiffon Cake. September 21, 2011 Pandan Chiffon Cake Pandan chiffon is one of those bake stuff that gives you the huge satisfaction when it is homemade. 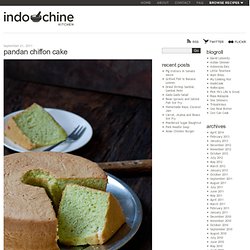 Huge. Doesn’t matter if it cost very little in the market. Black glutinous rice flour. Truth be told, i had no intention to make this chiffon cake at all. 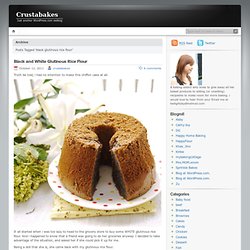 It all started when i was too lazy to head to the grocery store to buy some WHITE glutinous rice flour. And i happened to know that a friend was going to do her groceries anyway. I decided to take advantage of the situation, and asked her if she could pick it up for me. Being a doll that she is, she came back with my glutinous rice flour. But the black one, instead of the white. I suppose, i could have gone to the grocery store and asked for an exchange. But like what i said, i was too lazy to go to the grocery store. Table for 2.... or more: Black Glutinous Rice Chiffon - BGR Week # 1. W Recipe tried out Nov 2010 Last year, when I went to Homekreation to ogle at her onde-onde pulut hitam made from black glutinous rice (BGR) flour, I mentioned I am looking for this BGR flour and she was so so so so kind that she offered to mailed me some. 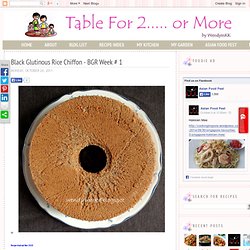 I was so so surprised at the offer, and of course, a bit shy to accept it. In the end, I still gave her my address and it arrived just before last year's Eid ul-Fitr. I was so so happy that I could finally try out this recipe that I saw on DG's blog loooooooooooooong ago. I'm not sure about what's wrong with the BGR flour, but this cake tasted grainy. Anyway, this could be due to a manufacturer's default. Black Glutinous Rice Chiffon Cake Recipe source: DG's Tested and Tasted 5 egg yolks (95gm) 35gm sugar 30gm corn coil 100gm coconut milk 1/3 tsp salt 67gm black glutinous rice flour 33gm cake /superfine flour ½ tsp baking powder5 egg whites (190gm) 85gm sugar 1/3 tsp cream of tartar1. Even the colour is not as black as it should be.