Overnight French Toast Muffins. Any Flavor Buttermilk Coffee Cake Recipe. Cardamom Coffeecake Recipe. Pepper Jack Beer Bread Muffins Recipe. Cinnamon Streusel Coffee Cake Recipe, Recipe from Martha Stewart Living, March 2011. Gingerbread doughnut muffins. There’s a doughnut store around the corner from me, and while I’m not usually tempted by their doughnuts (my best strategy is to just look the other way when I walk by their shop), this time of year they sell a gingerbread doughnut that I have been curious about. 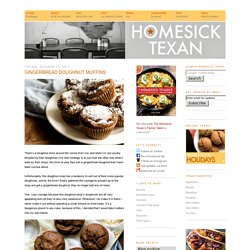 Unfortunately, this doughnut shop has a tendency to sell out of their more popular doughnuts, and by the time I finally gathered the courage to actually go to the shop and get a gingerbread doughnut, they no longer had any on hand. Yes, I say courage because this doughnut shop’s doughnuts are all very appealing and yet they’re also very expensive. Whenever I do make it in there I never make it out without spending a small fortune on fried treats. It’s a dangerous place! In any case, because of this, I decided that I would take matters into my own hands. When I first started blogging almost 10 years ago, doughnut muffins were all the rage. ------------ Are you looking for other breakfast ideas for the holidays? Yield:12 muffins. Maple Scones with Maple Glaze. July 3, 2012 | Print | E-mail | Filed under maple, scones I think scones are one of my favorite breakfast foods to make, as evidenced by the many scone recipes already on my blog. 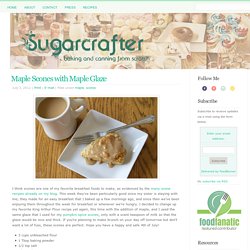 This week they’ve been particularly good since my sister is staying with me; they made for an easy breakfast that I baked up a few mornings ago, and since then we’ve been enjoying them throughout the week for breakfast or whenever we’re hungry. I decided to change up my favorite King Arthur Flour recipe yet again, this time with the addition of maple, and I used the same glaze that I used for my pumpkin spice scones, only with a scant teaspoon of milk so that the glaze would be nice and thick. If you’re planning to make brunch on your day off tomorrow but don’t want a lot of fuss, these scones are perfect. Hope you have a happy and safe 4th of July! 3 cups unbleached flour1 Tbsp baking powder1/2 tsp salt1/3 cup brown sugar1 stick butter2 eggs, lightly beaten1/2 cup pure maple syrup For the glaze: Bacon and Swiss Rye Muffins.

Baking Savory Scones for Winter Warmth — A Good Appetite. Andrew Scrivani for The New York Times I have to admit that as much as I contemplate a more enlightened month of juices, and smoothies, I generally give in to the primal yen for stews, casseroles and homemade baked goods. 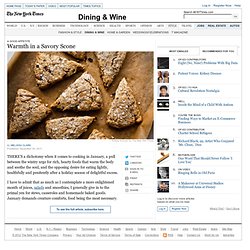 January demands creature comforts, food being the most necessary. So I bake, stew, braise and simmer my way through the month, enjoying a cozy kitchen with the stove turned on. Scones are always a part of my January baking repertory. Not only are savory scones a natural with tea, but they also go well with a host of dishes, sopping up the broth from those stews and soups. You can flavor savory scones in myriad ways. Just be sure to use a light touch when folding in whatever flavorings you choose. One way to avoid this heavy fate is to freeze the butter, then use the large holes of a box grater to shred the frozen stick directly into the flour. Blueberry lime oatmeal muffins and a new cookbook.

The other day my grandma asked me, “What have you been doing with yourself lately?” 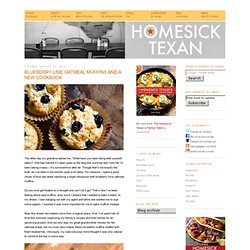 She had noticed it’s been quiet on the blog this summer and I told her I’d been taking it easy—it’s summertime after all. Though that’s not exactly the truth, as I’ve been in the kitchen quite a bit lately. Swedish Coffee Bread Recipe, Swedish Tea Ring Recipe. 1 Put milk into a small saucepan and heat on medium heat until steamy (but not boiling). 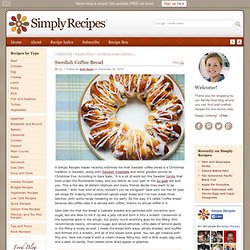 Remove from heat. Stir in the butter and sugar until the butter has melted and the sugar dissolved. Pour into a mixing bowl. Mix in yeast mixture and egg. 2 Mix in salt and cardamom. 3 Turn out onto a floured surface and knead dough for 7 to 10 minutes until smooth, OR use a dough hook in a stand-up mixer and knead the dough that way for 7 to 10 minutes, adding more flour as needed to keep the dough from being too sticky. 4 Place the dough in an oiled bowl, covered with a clean tea-towel or with plastic wrap.

At this point you can make a simple braided bread if you want (2 loaves), by punching the dough down, dividing the dough in half, and then dividing each half into three equal parts, rolling the dough pieces into ropes, braiding them, and tucking the ends under. 5 Press the dough down to deflate it a bit. 6 Carefully roll the dough up lengthwise, with the seam on the bottom. Maple Tea Scones Recipe at Epicurious. Preheat oven to 375°F. 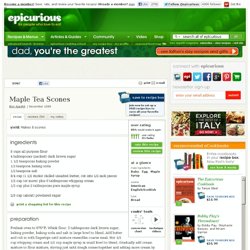