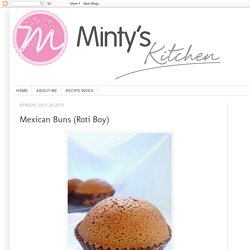 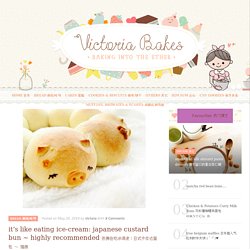 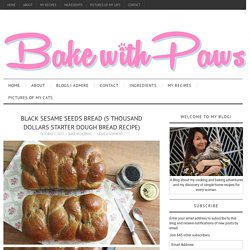 This is a recipe that went viral on Chinese websites. I was curious to try it and my first attempt turned out very satisfactory. The bread is very soft and fluffy and I would readily recommend this as a must try recipe for anyone who loves to bake. This recipe was adapted from Victoria Bakes and Vivian Pang’s Kitchen. The original recipe is without the sesame. Une-deux senses: Almond Custard Buns. There's one thing I know I love, and it's almond pastries. 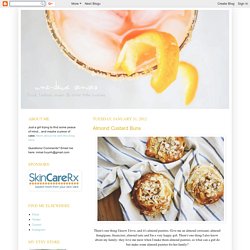 Give me an almond croissant, almond frangipane, financiers, almond tarts and I'm a very happy girl. There's one thing I also know about my family: they love me most when I make them almond pastries, so what can a girl do but make some almond pastries for her family? The other thing I know is that almonds are expensive - especially almond flour! Which, sucks because I use almond flour ALL of the time. Citrus & Chocolate Brioche Buns - Adventures in Cooking. So, I made it again, adjusting the chocolate filling to add more dark chocolate and less milk, which ended up making the chocolate layer the consistency of a refrigerated buttercream after a night in the fridge, which was exactly perfect. 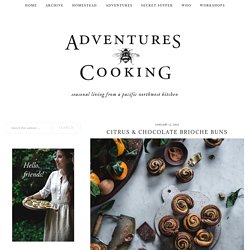 You want it soft enough to still be pliable and flexible, but firm enough that it can be sliced without oozing out everywhere when it’s all wrapped up in the dough. I added a bit more sugar, and used satsuma juice and buddha’s hand zest in the dough for a nice citrus flavor, satsumas are like a very sweet tangerine, and buddhas hand is an incredibly floral citrus that is used entirely for its ridiculously flavorful zest and pith. You can feel free to substitute oranges for the satsumas and buddhas hand, though, if you can’t find any. That little bit of citrus mixed into the custardy rich dough of brioche with a smear of chocolate filling…well, it’s a great way to start the new year. CHOCOLATE BRIOCHE — OSTRO. 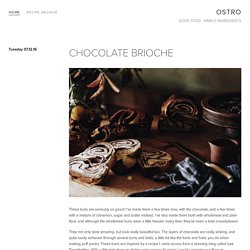 For the dough, stir the yeast into the warmed milk and allow to sit for a few minutes, or until a little bubbly. 2. In a large bowl, whisk the eggs and caster sugar lightly and add in the milk and yeast. Mix to combine. Add the flour and salt and mix until the mixture is smooth. Cover the bowl with cling film and allow to prove for two hours or until doubled in size, in a warm, draught free space. 3. 4. 5.

To create slightly more layers, you can work the dough like pastry. Repeat with other half of the dough and mixture. Japanese Melon Pan- The Little Epicurean. For most of my childhood and well into adolescence, I loved anime and manga. 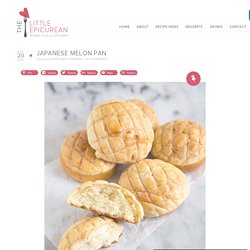 Think: Sailor Moon, Hana Yori Dango, Honey and Clover, Bleach, Death Note, etc. (I could go on and on…) During weekends and summer vacations, I’d binge watch episodes and read for hours. And then during college, my roommates and I were totally into Japanese and Korean comedies and dramas. We would stay up well into the early morning, crying and watching these intense and addicting shows and series.

And now in present time, thanks to Netflix, Hulu, and Amazon Prime, binge watching shows and movies has become way too easy. Melon Pan メロンパン. Learn how to make Melon Pan, a classic Japanese sweet bread covered in a thin layer of crisp biscuit/ cookie crust with grid line pattern on top. 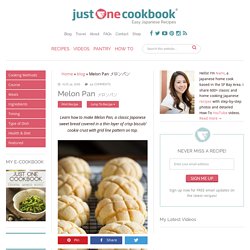 Do you think about the foods that you used to enjoy in your childhood and still long for them once in a while? Kashi pan (菓子パン) or Japanese sweet bread has a special spot in my heart, especially my favorite Anpan (あんパン) and these Melon Pan (メロンパン). Living abroad, there are not too many Japanese bakeries that sell freshly baked kashi pan; therefore I had to learn to make them mself.

Today I’ll show you how to make Melon Pan with both the hand kneading method as well as the stand mixer method. Are you ready? Matcha Melon Pan (Japanese Sweet Bread Buns) — Fix Feast Flair. There's a place in Echo Park called Winsome that sells the most epic matcha conchas. 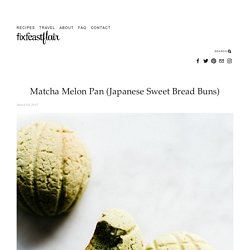 They are so light and fluffy and perfectly matcha-y and I dream about them. They're so good, Munchies devoted an article to them. A few blocks down the street from me, there's a coffee bread stuffed with red bean and mochi at a Taiwanese bakery called 85°C. I've been trying to forget about them because, skinny jeans, but I can't, they're so darn yum! Both of these sweet bread buns have a magical crunchy, cookie crust. Buttermilk Matcha Rolls with Black Sesame Cinnamon Filling » Betty L. 41 comments They’re like cinnamon rolls… on tea. 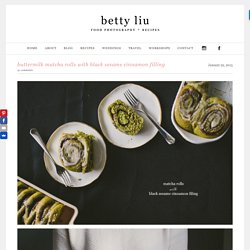 I was going to write on steroids, but that’s so overused and it didn’t really make sense because they’re not buffed up versions of cinnamon rolls. They’re just different, with more of a tea/nutty flavor. If you’ve had matcha flavored treats, you know what I’m talking about. Then add black sesame to the cinnamon filling????!!!!! Matcha Black Sesame Babka — Fix Feast Flair. Matcha + Azuki Hokkaido Milk Bread — Fix Feast Flair. Better chocolate babka – smitten kitchen. Inadvertently, this has become Festivus week on Smitten Kitchen, wherein I air my grievances at past recipes and exhibit what I hope can be passed off as “feats of strength” in reformulating them for modern times. Still, nobody could more surprised than I am that of all the recipes in the archives, it’s Martha Stewart’s decadent chocolate babkas from seven years ago that have ended up in this queue, because at the time we found them beyond reproach: rich, buttery, crumbly and intensely chocolaty.

They were precisely what we’d remembered getting from the store growing up, but better, I mean, I’d hope they’d be. Clocking in at 3/4 pound of semisweet chocolate and almost a cup of butter per loaf, the recipe in fact uses triple this (2.25 pounds of chocolate! 1.25 pounds of butter!) For three loaves. But it didn’t. Better Chocolate Babka Adapted from the Chocolate Krantz Cakes in Jerusalem: A Cookbook by Yotam Ottolenghi and Sami Tamimi Yield: 2 loaf-sized chocolate babkas. Matcha & Milk Tangzhong Bread Recipe. I don’t have any life-story to share with you today; only the story of the ridiculous bouts of indecision I’ve been going through when it came to sharing this Matcha-Milk Tangzhong Bread post.

Matcha Black Sesame Babka Recipe. Call me a hopeless romantic, but I believe in the concept of “The One”. As for the process of discovering who that is, that’s where I’m left a bit clueless. Do you catch sight of each other in a crowded room and feel oddly drawn, your heart pounding faster as you near? Could it be someone you once knew, and when you meet again you realize there’s some strange electric chemistry you never noticed before? The practical side of me is skeptical about these things, because it all sounds vague and hormonal– something that works better in movies rather than the real world– but the fantastical side of me loves these kinds of things. Funny, isn’t it? Thankfully when it comes to food, picking “The One” isn’t all too complicated or controversial. Homemade Cinnamon Bread. Life changing /-/ Pandan Pull man bread loaf.

Beetroot Bread. Nasi Lemak Lover: Watermelon Bread Loaf 西瓜土司. THE PINEAPPLE BUNS/PO LO BAO – Lady and Pups – an angry food blog. Pineapple Buns. For a long time now, pineapple buns, or bo lo bao, have been my unequivocal go-to choice whenever I walk into a Chinese bakery. I blow right past the char siu bao, the coconut buns, and the hot dog buns…and mosey right on over to these fluffy, delightfully quirky looking yellow half-domes of buttery, sugary joy. They. are. the. best. Peanut Gallery: “So, Sarah…if pineapple buns are in fact your favorite, what were you doing posting recipes for all those other ‘second tier’ buns before this one?”

Great question. Coconut Buns (Cocktail Buns) The Chinese bakery rampage continues, as we tackle traditional cocktail buns (also called or chicken tail buns, or gai mei bao) on the blog today. How to make super soft and fluffy Hokkaido Milk Bread. Hokkaido Milk Rolls. Indulge your family and friends this holiday season with the softest, fluffiest and most delicious dinner rolls ever. HOKKAIDO MILK BUNS AND PINEAPPLE CUSTARD – Lady and Pups – an angry food blog. These super gorgeous crochet-printed side-plates are from the lovely DishesOnly. This post, on top of the rare fact that it’s the third dessert-recipe within two weeks, is also going to take a rather unconventional introduction. Instead of my usual babbling on my, more often than not, unpleasant stories/inspirations behind a certain recipe, I’m going to gratefully credit this entire post to the unexpected blogging-perks that have been recently showering my life like a long-awaited rainfall.

First of all around 2 weeks ago, a mindfully packaged box from Italy oozing the kind of anticipation and excitement not even the strongest duct-tape can confine, quietly arrived at my doorstep. Carrying with it, among other gorgeous sample-ceramics, were 4 beautiful crochet-printed plates that marked the exciting collaboration between me, and the lovely Italian ceramic company – DishesOnly. For the past couple weeks, I have been dining out, non stop, for free. Milk Bread. Kitty bread buns and VITAGEN - Little Miss Bento. Totoro Pull-Apart Bread Bun. Matcha Black Sesame Rolls - The Little Epicurean. Chocolate Nutella Rolls. A desserts and baking blog. Chocolate swirl buns – smitten kitchen.