Works in the William Blake Archive 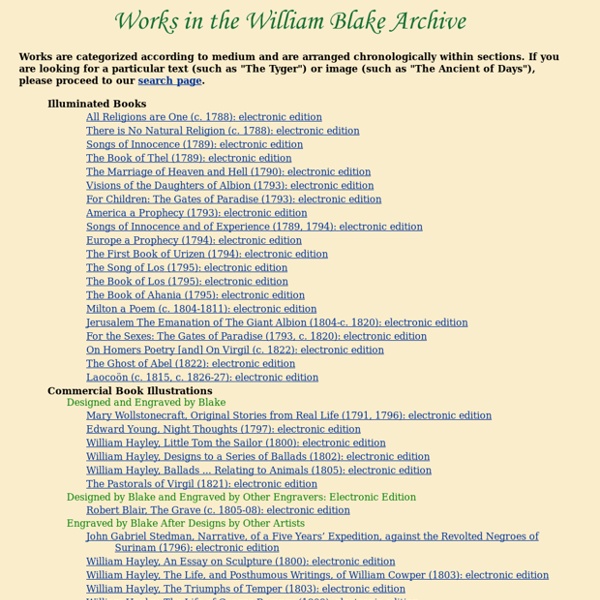 Free for All: NYPL Enhances Public Domain Collections For Sharing and Reuse Today we are proud to announce that out-of-copyright materials in NYPL Digital Collections are now available as high-resolution downloads. No permission required, no hoops to jump through: just go forth and reuse! The release of more than 180,000 digitized items represents both a simplification and an enhancement of digital access to a trove of unique and rare materials: a removal of administration fees and processes from public domain content, and also improvements to interfaces — popular and technical — to the digital assets themselves. Prelinger Archives : Free Movies : Download & Streaming Prelinger Archives by Castle Films movies eye favorite 98 comment 13

Andre Amador's Playa Paintings are Sandy Works of Art If you live in San Francisco, California, then you may be lucky enough to come across the art of Andres Amador. He doesn't paint or sculpt. He prefers a medium that is temporary but absolutely beautiful: a sandy beach at low tide. He uses a rake to create works of art that can be bigger than 100,000 sq. ft. He spends hours creating these intricate masterpieces, knowing that the tide will soon come in and wash away his work forever. For Andres, his art is "more about the process and less about the result."

The Deep State: How Camouflage Became Chic in Beltwayland - BillMoyers.com National Guard troops line Pennsylvania Avenue during an inaugural parade rehearsal January 16, 2005 in Washington, DC. (Photo by Matthew Cavanaugh/Getty Images) This post is an excerpt from The Deep State: The Fall of the Constitution and the Rise of a Shadow Government. Read our introduction to Mike Lofgren’s book and watch a video interview with him from Moyers & Company. Camouflage Chic Viking Press, January 2016 Index: if-archive/games/zcode This directory contains games in Infocom Z-Machine format, NOT games published by the company Infocom. The games here can be played with an Infocom game interpreter; look in infocom/interpreters for a version for your system. Source code of the games, if available, can be found in games/source/inform.

Art Against Apartheid Before Nelson Mandela, there was Albert Luthuli. A majestic figure, a hereditary Chief of the Zulus, Luthuli was clearly the most inspirational figure of his generation in South Africa, and his untimely death at the age of 69 in circumstances that can only be described as suspicious robbed South Africa of its most creative exponent of nonviolent resistance to apartheid. Luthuli had joined the African National Congress (ANC) in 1945, and he rose to become president of the provincial Natal branch of the ANC in 1951; the following year, Luthuli was among those who orchestrated resistance to the notorious pass laws. Four Quartets by T.S. Eliot Burnt Norton Time present and time past Are both perhaps present in time future And time future contained in time past. If all time is eternally present All time is unredeemable. What might have been is an abstraction Remaining a perpetual possibility Only in a world of speculation.

These are the books students at the top US colleges are required to read A boom in cheap fashion is coming. And unless we change the way we produce and sell clothes, it’s going to put massive strain on the environment and the people who make them. The conclusion comes from new research by McKinsey & Co., which looked at the way we currently consume fashion as well as the amplifying effect emerging markets could have as their growing middle classes buy more clothes. McKinsey found that a culture of disposable fashion is proliferating in which retailers keep putting out greater volumes of inexpensive clothing. Consumers, attracted by the low cost and constant newness, are buying these clothes in greater quantities, and often wearing them only a handful of times before discarding them. This fast-fashion ecosystem uses large amounts of natural resources while producing carbon emissions that fuel climate change.