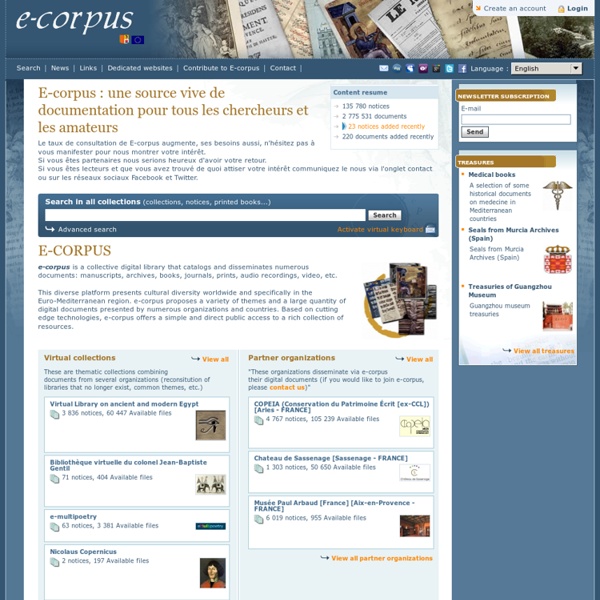 Procès de Nuremberg About the Project The Harvard Law School Library has approximately one million pages of documents relating to the trial of military and political leaders of Nazi Germany before the International Military Tribunal (IMT) and to the twelve trials of other accused war criminals before the United States Nuremberg Military Tribunals (NMT). The documents, which include trial transcripts, briefs, document books, evidence files, and other papers, have been studied by lawyers, scholars, and other researchers in the areas of history, ethics, genocide, and war crimes, and are of particular interest to officials and students of current international tribunals involving war crimes and crimes against humanity. To preserve the contents of these documents--which are now too fragile to be handled--and to provide expanded access to this material, the Library is undertaking a multi-stage digitization project.

Crowdmap Crowdmap allows you to set up your own deployment of the Ushahidi Platform without having to install it on your own web server. Crowdmap is the fastest, simplest installation of the Ushahidi platform. Within minutes you'll be up and running with your own installation, mapping reports events and visualizing information. Things You Can Do With Crowdmap List of national and state libraries A national library is established by the government of a nation to serve as the pre-eminent repository of information for that country. Unlike public libraries, they rarely allow citizens to borrow books. Often, they include numerous rare, valuable, or significant works; such as the Gutenberg Bible.

Institutional repository software comparison The Guidelines to compare Institutional Repository Software have been published as part of UNESCO’s Open Access Strategy. The publication compares the features of the major platforms and is intended to help libraries focus on which features will help facilitate the success of their repository. Institutional Repositories (IRs) were first developed as an online solution for collecting, preserving, and disseminating the scholarship of universities, colleges, and other research institutions. Since 2000, a number of repository platforms have been developed, each with their own set of benefits and technical criteria. All of these put libraries exploring IRs for the first time in an enviable position. The products have richer feature sets, and all the major platforms are available as a hosted service, which arguably has a lower total cost of ownership and is less time-consuming than running an IR locally.

CIA et la guerre froide People from nearly every country share information with CIA, and new individuals contact us daily. If you have information you think might interest CIA due to our foreign intelligence collection mission, there are many ways to reach us. If you know of an imminent threat to a location inside the U.S., immediately contact your local law enforcement or FBI Field Office. For threats outside the U.S., contact CIA or go to a U.S. Embassy or Consulate and ask for the information to be passed to a U.S. official.

List of national archives From Wikipedia, the free encyclopedia A national archive(s) is a central archives maintained by a nation. This article contains a list of national archives. A[edit] Handle System - Wikipedia As with handles used elsewhere in computing, Handle System handles are opaque, and encode no information about the underlying resource, being bound only to metadata regarding the resource. Consequently, the handles are not rendered invalid by changes to the metadata. The system was developed by Bob Kahn at the Corporation for National Research Initiatives (CNRI). The original work was funded by the Defense Advanced Research Projects Agency (DARPA) between 1992 and 1996, as part a wider framework for distributed digital object services,[2] and was thus contemporaneous with the early deployment of the World Wide Web, with similar goals. The Handle System was first implemented in autumn 1994, and was administered and operated by CNRI until December 2015, when a new "multi-primary administrator" (MPA) mode of operation was introduced.

Category:Museums by country Problems donating? | Other ways to give | Frequently asked questions | By donating, you are agreeing to our donor privacy policy. The Wikimedia Foundation is a nonprofit, tax-exempt organization.By donating, you are agreeing to our donor privacy policy and to sharing your information with the Wikimedia Foundation and its service providers in the U.S. and elsewhere. Persistent uniform resource locator - Wikipedia A persistent uniform resource locator (PURL) is a uniform resource locator (URL) (i.e., location-based uniform resource identifier or URI) that is used to redirect to the location of the requested web resource. PURLs redirect HTTP clients using HTTP status codes. PURLs are used to curate the URL resolution process, thus solving the problem of transitory URIs in location-based URI schemes like HTTP. Technically the string resolution on PURL is like SEF URL resolution. History[edit]

e-corpus is a collective digital library that catalogs and disseminates numerous documents: manuscripts, archives, books, journals, prints, audio recordings, video, etc. This diverse platform presents cultural diversity worldwide and specifically in the Euro-Mediterranean region. e-corpus proposes a variety of themes and a large quantity of digital documents presented by numerous organizations and countries. Based on cutting edge technologies, e-corpus offers a simple and direct public access to a rich collection of resources. by feillet Oct 12