33 Amazingly Useful Websites You Never Knew Existed. 13 Great Resources for Finding Free Public Domain Books. April 27, 2014 We all love to cuddle up with a good book and read a chapter or two before we fall asleep. 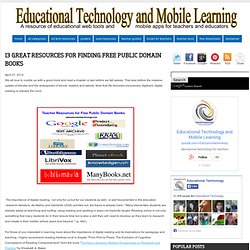 That was before the massive uptake of ebooks and the widespread of ebook readers and tablets. Now that life becomes excessively digitized, digital reading is virtually the norm. The importance of digital reading, not only for us but for our students as well , is well documented in the education research literature. As Malloy and Gambrell (2006) pointed out, the future is already here: " Many elementary students are already adept at searching and surfing, using reading and spelling in ways not explicitly taught. Reading online is not only something that many students do in their leisure time but is also a skill they will need to develop as they learn to research and create in their middle school years and beyond. " (p. 482). One important form of digital reading is reading ebooks. 1- Google Books There is no other platform that would top this list other than the powerful Google Books. 33 Amazingly Useful Websites You Never Knew Existed. 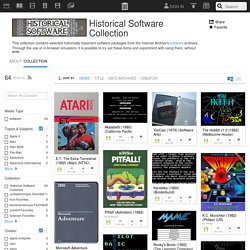 It is based on the film of the same name, and was designed by Howard Scott Warshaw. The objective of the game is to guide the eponymous character through various screens to collect three pieces of an interplanetary telephone that will allow him to contact his home planet. Warshaw intended the game to be an innovative adaptation... favorite ( 1 reviews ) Topics: Atari 2600, E.T., Howard Scott Warshaw, Atari Akalabeth: World of Doom /əˈkæləbɛθ/ is a role-playing video game that had a limited release in 1979 and was then published by California Pacific Computer Company for the Apple II in 1980.

Richard Garriott designed the game as a hobbyist project, which is now recognized as one of the earliest known examples of a role-playing video game and as a predecessor of the Ultima series of games that started Garriott's career. Digital Archaeology show reveals 'lost' web sites. The world's first ever 'archaeological dig' of the internet is set to begin this week in London's über-trendy Shoreditch. The exhibition, entitled Digital Archaeology, kicks off today to mark the 20th anniversary of the first stirrings of the world wide web. According to its organisers, valuable evidence from the interweb's early days is at risk of being lost forever.

Digital Archaeology is an attempt to kick-start a wider attempt to archive the web in Britain's first 'digital archive'.. "In five years' time or so, I doubt websites will exist and I expect the vast majority of sites from the first twenty years of the web to be gone forever," says Jim Boulton, curator of Digital Archaeology. "Today, when almost a quarter of the earth's population is online, this artistic, commercial and social history is being wiped from the face of earth, within millions of hard drives lying festering in recycling yards or rusting in garages," he explained.

You'll find out more about the exhibition here. DuckDuckGo. The 101 Most Useful Websites on the Internet. Here are the most useful websites on the Internet that will make you smarter, increase productivity and help you learn new skills. These incredibly useful websites solve at least one problem really well. And they all have cool URLs that are easy to memorize thus saving you a trip to Google. Also see: The Best Android Apps Also see: The Best Mac Apps and Utilities seatguru.com – consult this site before choosing a seat for your next flight.webmakerapp.com — an offline playground for building web projects in HTML, CSS and JavaScript. See: The Most Useful Tools for Programmers Also see: The Best Add-ons for Gmail, Docs and Sheets.