Autoimmune Disorders / The Immune System and the Gut Microbiome

Disruption of the gut microbiome may be an important piece of the puzzle for autoimmune disorders. Realize that it isn't the whole picture. Genetic vulnerabilities, trauma, stress, environmental pollutants, EMF radiation and mold exposure can also play a role. 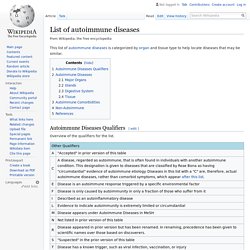 Celiac and the Gut Microbiome

Type 1 Diabetes. Fibromyalgia. Gluten Ataxia. Hashimoto's. Lupus. Multiple Sclerosis and the Gut Microbiome. Osteomyelitis. Psoriasis and the Gut Microbiome. Raynaud's Syndrome. Rheumatoid Arthritis and Other Forms of Arthritis. Sjogren's Syndrome. Autoimmune Uveitis. Leaky Gut: The missing piece in many Autoimmune Diseases, like Hashimoto’s Thyroiditis. What Causes Allergies and Autoimmune Disorders? Allergies and autoimmune disease are reaching epidemic proportions — not just in the U.S. and Europe, but in the rest of the industrially developing world. 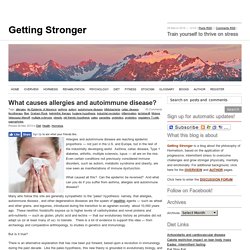 Asthma, celiac disease, Type 1 diabetes, arthritis, multiple sclerosis, lupus — all are on the rise. Even certain conditions not previously considered immune disorders, such as autism, metabolic syndrome and obesity, are now seen as manifestations of immune dysfunction. What caused all this? Animation: Immunology in the gut mucosa. The gut mucosa is the largest and most dynamic immunological environment of the body. 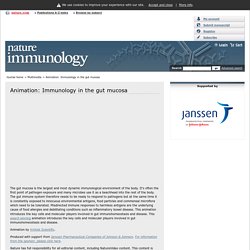 It's often the first point of pathogen exposure and many microbes use it as a beachhead into the rest of the body. The gut immune system therefore needs to be ready to respond to pathogens but at the same time it is constantly exposed to innocuous environmental antigens, food particles and commensal microflora which need to be tolerated. Microbiome shift linked to Autoimmune. I have extracted from studies the bacteria that have been associated with various autoimmune-related conditions as well as building pages to apply them to uBiome samples at: . 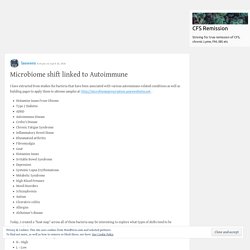 Researchers have established the connection between the consumption of processed food and autoimmune disease. 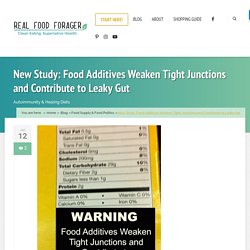 In a study published in the journal Autoimmunity Reviews, researchers have identified more processed foods associated with autoimmune disease. Since Dr. Fasano identified the three factors needed in the perfect storm of autoimmunity, leaky gut has become a household word. Gut problems not getting better? Consider gut autoimmunity. Scientists discover a possible link between gut microbiota and autoimmune diseases.

SCFA – Gut bacteria’s ally in taming autoimmunity and inflammation. Naperville Institute For NeuroMetabolic Solutions. Lectins are problematic because they are sticky molecules that can bind to the linings of human tissue. 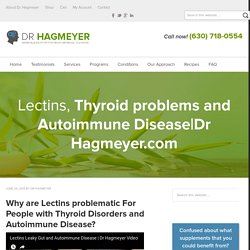 Many food lectins can interact with and damage the delicate lining of the small intestine and lead to a “leaky gut” via inflammation of the microvilli (the finger like projections of the intestinal cell that increase surface area for better nutrient absorption). Certain viruses, parasites,bacteria can accomplish the same task (creating inflammation) due to lectins they contain as well.

Because the lectins can damage the intestinal villi, they have the ability to enter and circulate throughout the bloodstream. Once they enter the bloodstream, they can bind to any tissue in the body ­— thyroid, pancreas, collagen in joints, Nerve tissue and cause an inflammatory immune attack on the above mentioned tissues.

H. Pylori and Autoimmune Link. The hygiene hypothesis in autoimmunity: the role of pathogens and commensals. The Link Between Autoimmunity and Your Gut. Extradigestive manifestations of Helicobacter pylori gastric infection. Cooling Inflammation: Cause of Autoimmunity and Allergies. Inflammation-Induced Presentation by Mannose Receptor Speculation on how innocuous proteins become the targets of our immune systems, and result in allergies, asthma, celiac, arthritis, lupus, and other inflammatory autoimmune diseases. 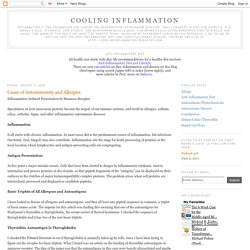 Inflammation It all starts with chronic inflammation. In most cases diet is the predominant source of inflammation, but infections (bacterial, viral, fungal) may also contribute. Cooling Inflammation: Autoimmunity, Allergies and Basic Triplets. Basic Triplets Only in Primate Forms and Allergens I have examined the proteins, autoantigens, that are the focus of a dozen autoimmune diseases and a similar number of allergens. 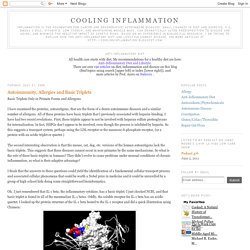 All of these proteins have basic triplets that I previously associated with heparin-binding. Autoimmunity Originates in the Gut. Video: Reshaping the immune system: Moises Velazquez-Manoff at TEDxCibeles. Wheat and Innate Immunity. Despite mainstream nutrition’s continued promotion of grain-based foods as part of a healthy diet, the evidence against wheat continues to grow (and grow, and grow!). 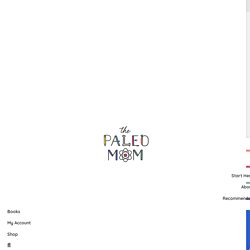 And, it’s becoming increasingly clear that celiacs aren’t the only ones who need to be cautious about eating this ubiquitous grain! Immune Response Promotes Infection. Salmonella enterica serovar TyphimuriumWIKIMEDIA, CDCSome immune responses are known to backfire. 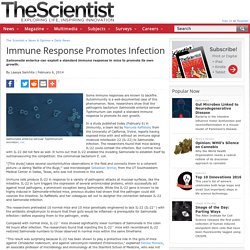 Autoimmunity is a well-documented case of this phenomenon. Now, researchers show that the pathogenic bacterium Salmonella enterica serovar Typhimurium can exploit a standard immune response to promote its own growth. In a study published today (February 6) in Immunity, a team led by Manuela Raffatellu from the University of California, Irvine, reports having exposed mice with and without an immune signal molecule interleukin 22 (IL-22) to Salmonella infection.

The researchers found that mice lacking IL-22 could combat the infection. But normal mice with IL-22 did not fare as well. Gut Microbes May Hasten HIV to AIDS Progression. The arrival of anti-retroviral therapy, a combination of medications used to slow the progression of HIV, has allowed many people infected with the virus to live long, productive lives. But the therapy is not a cure. And those who take the drugs have an elevated risk for cardiovascular disease, cancer, kidney and liver disease, and other disorders seen in HIV patients. HIV infection also can lead to diseases affecting the intestines, with increased gastrointestinal (GI) inflammation, diarrhea and problems with nutrient absorption. The role of gut microbes in such issues is not completely understood, but now, in two studies led by researchers at Washington University School of Medicine in St. Does the Gut Microbiome Play a Role in Autoimmune Disease? Connections between gut microbiota and autoimmune disease.

Systemic lupus erythematosus (SLE) is a chronical autoimmune disease in which the body’s immune system mistakenly attacks healthy tissue. It can affect the skin, joints, kidneys, the brain and other organs. Integrative Rheumatology - Dr Michael Powell. Autoimmune and Vitamin 1,25D. I thought that I should put together a collection on conditions that have been documented to have a high Vitamin 1,25D result(Calcitriol) when tested. ” Results showed a strong positive association between these autoimmune conditions[ multiple sclerosis, lupus, psoriasis, osteoporosis, osteoarthritis, metabolic syndrome, fibromyalgia and chronic fatigue syndrome] and levels of 1,25-D >110 pmol/L. However, there was little association with vitamin D deficiency or the other inflammatory markers, meaning that the results challenge the assumption that serum levels of 25-D are a sensitive measure of the autoimmune disease state.” [2009]“In granulomatous disease such as lymphoproliferative disorders, sarcoidosis, tuberculosis, and inflammatory bowel disease,”[emedicine]“postural orthostatic tachycardia syndrome” – remission with calcitriol treatment [2012] General Vitamin D level and symptoms.

Autoimmune Diseases and the Gut Biome. After posting this morning about "winding down," I ended up wanting to add a sub-section to the Autoimmune Diseases section in Chapter 8 of the book: The Gut Microbiome In Disease Pathology (html version). Thanks to Tim Steele for his major contributions to this as well. Hopefully you'll see that the intended style is layman accessible, but well referenced for the geeks. Didn't take the time to make it pretty for the blog (the link above has footnote links and links to citations), so here's just a plain text: Celiac and Other Autoimmune Disorders. In celiac, immune cells fight ferociously against a crumb of bread, damaging the small intestine in the process. Gluten, normally innocuous, leaks out of the small intestines of people with celiac disease, triggering a sequence of cellular activity more appropriate for fighting off a deadly salmonella infection.

Celiac disease is not to be confused with gluten intolerance or other phrases used lightly by people seeking to eat healthily, says Alice Bast, president and CEO of the National Foundation for Celiac Awareness. “Celiac disease is a serious genetic autoimmune disease,” Bast says. She repeats, with emphasis: “Serious. Autoimmunity and the Gut. The Gut Microbiota in Immune-Mediated Inflammatory Diseases. Early symptoms of possible auto-immune (FM/CFS/ etc) onset. Which comes first: the leaky gut or the dysfunctional immune system? - The Paleo Mom.

Video Talk: How the Human Microbiome causes Human Chronic Disease (25 minutes) Video on Autoimmune & Bacteria + Best Eczema Report Yet. Female Gut, Fiber, Autoimmune: Do Women Need More Fiber Than Men? Female Hormones, Weight and Auto-Immunity - The Paleo Mom. I write this post in the midst of a huge hormone adjustment. My youngest weaned just a couple of weeks ago and my body is still trying to figure it out. I was pregnant or lactating for over 5½ years (I got pregnant with my second daughter only few weeks after my oldest weaned), so I don’t expect this adjustment to be easy for my body. I feel more tired and emotional and find myself craving sugar (not good during the holidays when sugar is so easily found). The hormones that regulate a woman’s menstrual cycle, pregnancy and lactation have a complicated interplay, some going up while others go down in a way that is specific to what is happening in your body.

It is truly amazing to think of how many different jobs these hormones do. If you are a woman who is struggling to lose weight, hormones may be to blame. These hormones have another very important job while you are pregnant. Reduced diversity and altered composition of the gut microbiome in individuals with myalgic encephalomyelitis/chronic fatigue syndrome. The human microbiome and autoimmunity. The nature of immune responses to urinary tract infections : Nature Reviews Immunology : Nature Research.

Defective regulatory T cells (Tregs) alter the gut microbiome, leading to a variety of autoimmune diseases. New findings suggest that replacing absent gut bacteria or restoring a key metabolite could help treat children with IPEX syndrome. Chronic Diseases Can’t Be Cured? Food as Medicine. The Big Picture Ordovás says we shouldn’t forget that other factors, such as beneficial gut microbes, also play an important part in questions of nutrition and the delicate balance between health and disease, which explains the rising popularity of probiotics. (A healthy microbiome is perhaps best encouraged by diets including plenty of plants. See “Change Your Microbiome, Change Yourself” in the spring 2014 issue of Genome for more on this topic.)

While the field of nutrigenomics goes back almost three decades, progress has been slow. But Ordovás has grown “mildly optimistic” in recent years that a clearer picture might begin to take form. “Nowadays, we have the technology, and we have substantially increased our knowledge about the genome,” he says. Ordovás began his work many years ago by taking advantage of long-term studies involving 3,000 or 4,000 people.

“Many studies don’t consider that not all people are the same and will respond differently to foods. Health Diagrams II — Curing Autoimmunity and Allergies. Educate Your Immune System. Your Microbial Garden - Balancing your Immune System.

This is a list of papers and resources. – kiraonysko