Shocking Study Finds that Penicillin Changes Childrens’ Brains, Causing them to Grow up Angry and Violent - Waking Times Media. The findings were published in the journal Nature Communications. 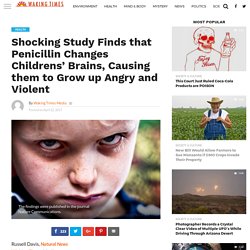 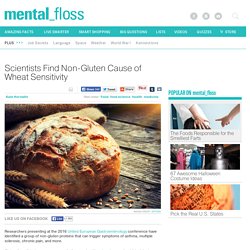 Gluten-free diets began as a necessity for people with celiac disease, in which violent immune reactions to wheat can cause intestinal damage, widespread inflammation, and trouble absorbing nutrients. Psychobiotics: Bacteria For Your Brain? New Finding Adds To Growing Evidence That Intestinal Bacteria Is Directly Linked To Disease. Karen Foster, Prevent DiseaseWaking Times There’s no doubt about it, bacteria keep us alive. 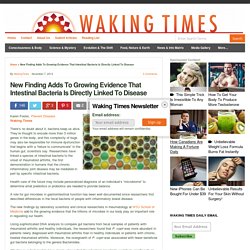 They’re thought to encode more than 3 million genes in the body, and this complexity of bugs may also be responsible for immune dysfunction that begins with a “failure to communicate” in the human gut, scientists say. Researchers have linked a species of intestinal bacteria to the onset of rheumatoid arthritis, the first demonstration in humans that the chronic inflammatory joint disease may be mediated in part by specific intestinal bacteria. Health care of the future may include personalized diagnosis of an individual’s “microbiome” to determine what prebiotics or probiotics are needed to provide balance. A role for gut microbes in gastrointestinal function has been well documented since researchers first described differences in the fecal bacteria of people with inflammatory bowel disease. NATURAL Cure for FUNGUS, CANDIDA, YEAST. Another Reason Why Wheat and GMOs Can Destroy Your Health. Sayer Ji, GreenMedInfoWaking Times A new study indicates that wheat contributes to the growth of pathogenic bacteria in our gut, adding to growing concern that GMO foods are doing the same. 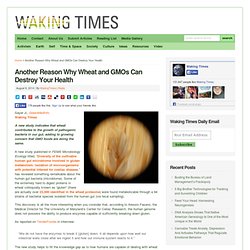 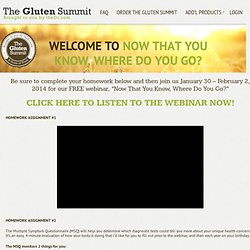 The Multiple Symptom Questionnaire (MSQ) will help you determine which diagnostic tests could tell you more about your unique health concerns. It’s an easy, 4-minute evaluation of how your body is doing that I’d like for you to fill out prior to the webinar, and then each year on your birthday. The MSQ monitors 2 things for you: - Progress after implementing new protocols (e.g., diet/nutrition changes) - Your “Big Picture” health over time (each month, year, etc.) Click to Download the MSQ Now. Before Marsh III: Why the Early Stages of Celiac Disease Must be Taken Seriously. Natural Ways to Avoid and Recover From Antibiotics. Erin Schumacher, Guest WriterWaking Times Most of us have taken antibiotics at some point in our lives. 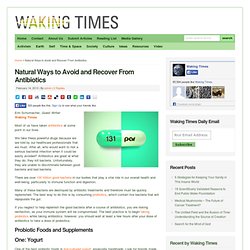 We take these powerful drugs because we are told by our healthcare professionals that we must. After all, who would want to risk a serious bacterial infection when it could be easily avoided? Antibiotics are great at what they do; they kill bacteria. Unfortunately, they are unable to discriminate between good bacteria and bad bacteria. There are over 100 trillion good bacteria in our bodies that play a vital role in our overall health and well-being, particularly to immune function and digestion. The Forgotten Organ – Your Microbiota. Dr. 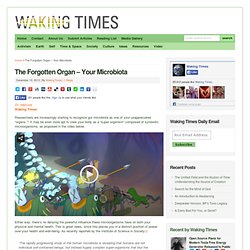 MercolaWaking Times Researchers are increasingly starting to recognize gut microbiota as one of your unappreciated “organs.”1 It may be even more apt to view your body as a “super organism” composed of symbiotic microorganisms, as proposed in the video below. Either way, there’s no denying the powerful influence these microorganisms have on both your physical and mental health. 3 Ways to Heal A Stressed Metabolism. Do you have a stressed metabolism? 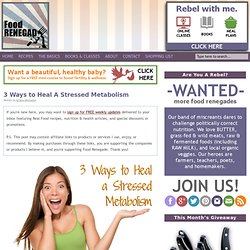 Have you ever lost weight by going on a restrictive diet, then gained it all back (even if you didn’t entirely abandon the diet)? Or maybe you’ve got thyroid problems, irregular menstrual cycles, mood swings, or acne? Are you tired during the day and alert at night? If any of these sound familiar, it’s likely you have a stressed metabolism. What is Going on in Your Gut? Your Second Brain, Bacteria, and Your Health. Lily Dane The Daily Sheeple December 27th, 2013 Reader Views: 1,369 Bacteria. 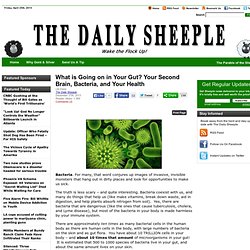 Forget Prozac - Try Probiotics to Ease Anxiety, Curb Depression and Elevate Mood. By Carolanne Wright Contributing Writer for Wake Up World Could eating yogurt be a replacement for antidepressants? 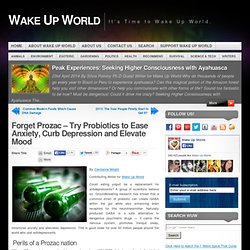 A group of scientists believe so. Should Wheat Be Reclassified as a Pathogen? Sayer Ji, Green Med InfoWaking Times A provocative, though still largely under appreciated study titled, “Parallels between Pathogens and Gluten Peptides in Celiac Sprue,” published in PLoS in 2008 proposed a radically new definition of pathogen be employed to understand the extensively documented harm that the consumption of wheat is capable of doing to human physiology. The new theory proposes that we move beyond initial 19th century formulation of pathogens as exogenous agents (e.g. bacteria, viruses, fungi) capable of causing disease in susceptible organisms to include dietary exposure to wheat peptides within genetically susceptible susceptible individuals. Gluten Brain: How Wheat Cuts off Blood Flow. Psychobiotics: Bacteria For Your Brain? Dr. Kelly Brogan, M.D., Green Med InfoWaking Times Every functional medicine psychiatrist has case stories of the ‘probiotic cure’ – of a patient with debilitating symptoms, often obsessive compulsive range, whose symptoms remitted completely with dietary change and probiotic supplementation.

Is this voodoo or is it based on a growing understanding of the role of the microbiome in mental health and behavior? For two decades now, pioneering researchers have been substantiating inflammatory models of mental illnesses such as depression, bipolar disorder, and schizophrenia. 9 Reasons to Think Twice Before Taking Antibiotics Ever Again. Paul Fassa, Natural SocietyWaking Times A study published by Mayo Clinic found that almost 70% of Americans are on at least one pharmaceutical; antibiotics top the list, followed by antidepressants, and opioid pain killers.

This is a problem in of itself, as it the United States has transformed into a pill-popping, medication-dependent nation. What’s worse is that antibiotics in particular are doled out in copious, unnecessary amounts, so much so that bacteria are developing major resistance to this conventional treatment. This is now a potential danger of antibiotics, and a serious grand-scale side effect of antibiotic use.

Even the WHO is calling this resistance a global health crisis, and the Centers for Disease Control and Prevention says that the age of antibiotics must come to an end. While antibiotics have helped greatly with modern medicine, it seems that we need to start looking for alternative solutions. How to Choose the Right Probiotic for Your Imbalance. It is no surprise that we are seeing more research linking beneficial microbes to health benefits outside the digestive system. Most of this research tracks the many health benefits delivered by different strains of probiotic supplementation.

HCL: Not Just Another Supplement. So you’ve been to the naturopath and they’ve given you a bunch of new supplements to jumpstart your healing. New Finding Adds To Growing Evidence That Intestinal Bacteria Is Directly Linked To Disease. Treating yeast infections nature's way. Antibiotic Resistant Germs: Are You In Danger? How To Eliminate Candida Naturally. The Relationship Between Gut Health, Fat Cells and Chronic Illnesses Like Diabetes. Gut Health: How to Heal the Body from the Inside Out. Via Michael Edwardson Jun 14, 2015 Like everything else in life, healthy gut flora is all about balance. 6 Surprising Facts About Microbes In Your Gut. Karen Foster, Prevent DiseaseWaking Times Researchers have long suggested a link between the gut-brain axis and neuropsychiatric disorders such as autism, depression, and eating disorders. Using probiotics and prebiotics to alter the gut microbiota and influence the gut-brain axis may open up new ways of influencing neuropsychological conditions, says a new review.

The majority of the science for probiotics has focused on gut health, but as the understanding of the gut and the microbiome increases, probiotics are increasing linked to a range of beneficial effects, from weight management to immune support and allergy response, and from oral health to cholesterol reduction.