What Is A Leaky Gut? (And How Can It Cause So Many Health Issues?) - The Paleo Mom. (Created as a guest post for The Paleo Parents) One of the fundamental principles of paleolithic nutrition is avoiding foods that damage the lining of the gut. 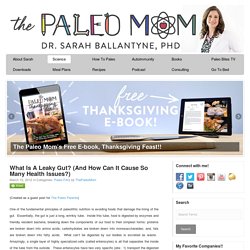 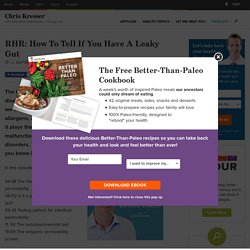 It allows for the absorption of nutrients from the food we eat, while at the same time, it protects against the entry of allergens, as well as bacteria, fungi, and parasites. Essentially, it plays the role of a gatekeeper. The gut-vascular barrier’s role in regulating bacterial systemic dissemination — The American Microbiome Institute. Microbiota that populate the gut do not have access to lymphatics, the liver, or other peripheral tissues in healthy individuals. 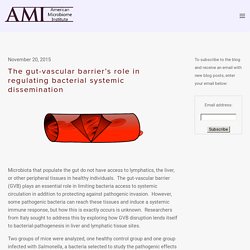 The gut-vascular barrier (GVB) plays an essential role in limiting bacteria access to systemic circulation in addition to protecting against pathogenic invasion. However, some pathogenic bacteria can reach these tissues and induce a systemic immune response, but how this is exactly occurs is unknown. Which comes first: the leaky gut or the dysfunctional immune system? - The Paleo Mom. I was asked by healthline.com to comment on a new study from researchers at Lund University in Sweden that was published earlier this month in the journal PLoS ONE. 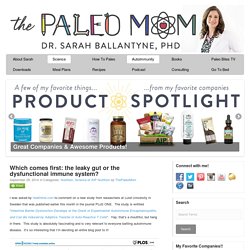 The study is entitled “Intestinal Barrier Dysfunction Develops at the Onset of Experimental Autoimmune Encephalomyelitis, and Can Be Induced by Adoptive Transfer of Auto-Reactive T Cells“. Yep, that’s a mouthful, but hang in there. This study is absolutely fascinating and is very relevant to everyone battling autoimmune disease. What Should You Eat To Heal a Leaky Gut? - The Paleo Mom. (Created as a guest post for The Paleo Parents) If you are concerned that you may have, or could develop, a leaky gut, then changing your diet to one that protects the gut is a natural next step for you. 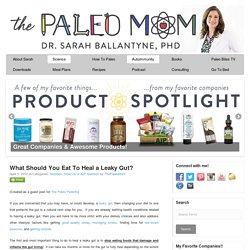 If you are already battling health conditions related to having a leaky gut, then you will have to be more strict with your dietary choices and also address other lifestyle factors like getting good quality sleep, managing stress, finding time for low-strain exercise, and getting outside. Why Grains Are Bad-Part 1, Lectins and the Gut - The Paleo Mom. The idea that grains are harmful is one of the most fundamental tenets of the Paleo diet. 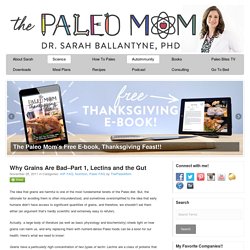 But, the rationale for avoiding them is often misunderstood, and sometimes oversimplified to the idea that early humans didn’t have access to significant quantities of grains, and therefore, we shouldn’t eat them either (an argument that’s hardly scientific and extremely easy to refute!). Actually, a large body of literature (as well as basic physiology and biochemistry) sheds light on how grains can harm us, and why replacing them with nutrient-dense Paleo foods can be a boon for our health. Here’s what we need to know! How Do Grains, Legumes and Dairy Cause a Leaky Gut? Part 2: Saponins and Protease Inhibitors - The Paleo Mom.

One of the fundamental principles of the Paleo diet is to support gut health. 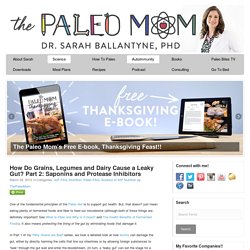 Leaky Gut & Gluten Belly: Bacterial Firebugs Translocate from Your Gut to Your Ever-Growing Visceral Fat Depots - SuppVersity: Nutrition and Exercise Science for Everyone. "Leaky gut", for decades one of those concepts, the belief in which divided self-proclaimed "real scientists" from their "hippie" counterparts, has eventually found its way to mainstream science. 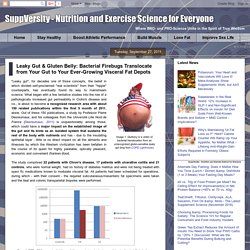 What began with a few tentative studies into the role of a pathologically increased gut permeability in Crohn's disease and co., is about to become a recognized research area with about 150 related publications within the first 9 month of 2011, alone. The study comprised 22 patients with Chron's disease, 17 patients with ulcerative colitis and 21 controls, who were normal weight, had no history of diabetes mellitus and were not being treated with speci ﬁc medications known to modulate visceral fat. Beyond Celiac: Study Sheds New Light on Obesogenic Effects of Gluten - Are PPARs & Bacteria Both Involved? - SuppVersity: Nutrition and Exercise Science for Everyone. With Christmas Eve being over, and grandma's cookies, Christmas stollen, and all sorts of other stuff from the bakery in front of you (literally), Christmas Day may actually prove to be a way more "dangerous" than Christmas Eve - not just because of the total amount of calories, but also because of the low satiety effect of these sweet treats. 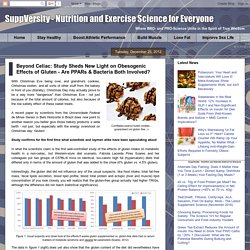 A recent paper by scientists from the Universidade Federal de Minas Gerais in Belo Horizonte in Brazil does now point to another reason you better give those bakery products a wide berth - not just, but especially with the energy overshoot on Christmas day: Gluten! Study confirms for the first time what scientists and laymen alike have been speculating about The data in figure 1 (right) does yet also show that the gluten content of the diet did nevertheless have a significant impact on the total body mass, visceral fat mass, lipid content and most importantly the adipocyte size. Endotoxin: Part 1 - How Opportunistic Bacteria Damage Your Heart. For the last decade, I have been finding articles about fecal matter transplants in rats. 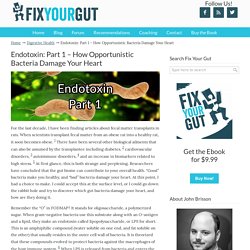 When scientists transplant fecal matter from an obese rat into a healthy rat, it soon becomes obese. There have been several other biological ailments that can also be assumed by the transplantee including diabetes, cardiovascular disorders, autoimmune disorders, and an increase in biomarkers related to high stress. At first glance, this is both strange and perplexing. Researchers have concluded that the gut biome can contribute to your overall health. “Good” bacteria make you healthy, and “bad” bacteria damage your heart. Remember the “O” in FODMAP? Endotoxin: Part 2 - How Opportunistic Bacteria Damage Your Liver. Although I am probably in the minority, I enjoy returning to work after the holiday. It is just the right amount of rest that I need to recharge and get back to it. I am fortunate to have a job that I enjoy. Not many people have that privilege. I overheard some of my coworkers talking about how much they dreaded returning to work.

They looked tired – exhausted, and they were complaining about the amount of weight they put on. Endotoxin: Part 3 - Gallstones and Heart Disease Is There a Link? Since the 1960’s scientists saw a possible correlation between the development of gallstones and heart disease. Most people thought that it was just the risk factors associated with developing gallstones was the cause, not the issues with digestion. Obesity and diabetes are two risk factors for having issues with gallstones that have been linked to developing heart disease. Both, however, have been linked to gut issues as being the cause of developing diabetes or being obese. Later studies, however, cast doubt on the risk factors being the only cause.

Endotoxemia Alzheimers. Why Do I Feel So Blue Leaky Gut. Fibromyalgia IBS and Endotoxemia. PUFAs Leaky Gut and the Liver. Regulation of Tight Junction Permeability by Intestinal Bacteria and Dietary Components. The human intestine allows the absorption of nutrients while also functioning as a barrier, which prevents antigens and pathogens entering the mucosal tissues and potentially causing disease. The intestinal tract is inhabited by 1014 microbes (1), and it is becoming increasingly evident that they are involved in molecular crosstalk with the intestinal epithelium and affect intestinal barrier function (2). Increased intestinal permeability is implicated in autoimmune, inflammatory, and atopic diseases, which can manifest both locally (within the intestinal mucosa) and systemically. Chronic inflammatory diseases of the intestine, such as inflammatory bowel disease (3) and celiac disease (4), are characterized by a leaky intestinal barrier.

In type I diabetes, an autoimmune disease, patients have increased small intestinal permeability (5). The incidence of diabetes can be reduced in diabetes-prone rats by preventing an increase in epithelial permeability (6). Structure of TJ. Circulating Zonulin, a Marker of Intestinal Permeability, Is Increased in Association with Obesity-Associated Insulin Resistance. Abstract Zonulin is the only physiological mediator known to regulate intestinal permeability reversibly by modulating intercellular tight junctions. To investigate the relationship between intestinal permeability and obesity-associated metabolic disturbances in humans, we aimed to study circulating zonulin according to obesity and insulin resistance.