Gluten Sensitivity and the Gut Microbiome 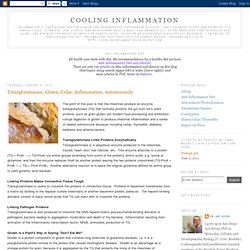 Transglutaminase Links Proteins Enzymatically Transglutaminase is a ubiquitous enzyme produced in the intestines, thyroid, heart, skin, hair follicles, etc. This enzyme attaches to a protein (TG + ProA ~~> TG-ProA) via amino groups extending from some of the protein's amino acids, e.g. lysine or glutamine, and then the enzyme replaces itself by another protein leaving the two proteins crosslinked (TG-ProA + ProB ~~> TG + ProA-ProB). Another alternative reaction is to leave the original glutamine without its amino group to yield glutamic acid residues. Linking Proteins Makes Connective Tissue Tough.

Cooling Inflammation: Anti-inflammatory, Gluten-Free Diet for Celiac. Low Grain Is Good for Everyone I don’t think that I have an intolerance for grain, i.e. a gluten sensitivity, but it is so common and the biochemistry is so obvious, that it is only prudent to avoid wheat and related grain products. 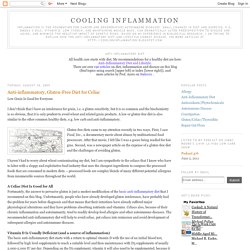 A low or gluten-free diet is also similar to the other common healthy diets, e.g. low carb and anti-inflammatory. Gluten-free diets came to my attenti on recently in two ways. First, I saw Food, Inc., a documentary movie about abuses by multinational food processors. I haven’t had to worry about wheat contaminating my diet, but I am sympathetic to the celiacs that I know who have to labor with a sloppy and exploitative food industry that uses the cheapest ingredients to compose the processed foods that are consumed in modern diets -- processed foods are complex blends of many different potential allergens from innumerable sources throughout the world.

Grassfed Meat/Eggs Are Your FriendsCeliacs should seek out grass/pasture fed meats, eggs and wild caught fish. Celiac Can Increase Risk for Intestinal Fungal Overgrowth. H. pylori, Iron Deficiency and Gluten Sensitivity - Is There A Connection? The influence of a short-term gluten-free diet on the human gut microbiome. Food intake We first investigated if a GFD had a significant effect on the daily intake of macronutrients by analyzing the GFD and HD food records from participants (Additional file 2: Table S1). 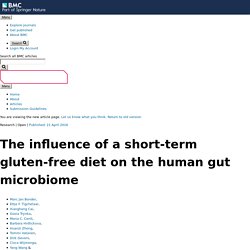 Mean (SD) daily intakes of energy, protein, fat, and carbohydrate during GFD and HD are shown in Table 1. We observed slightly higher carbohydrate intake and a slightly lower fat intake on GFD; however, none of the differences in energy or macronutrient intake were significantly different. We therefore concluded that dietary macronutrient composition was not significantly changed by following a GFD. Microbial differences due to diet In total we used 155 fecal samples, originating from 21 individuals, for the microbiota analysis and we observed 114 different taxonomic units. Next, we tested if there was any difference in the bacterial diversity related to variation in diet between participants (beta-diversity) by comparing the unweighted unifrac distance in sample groups. Gluten Sensitivities and Bacteria. Science news has a recent article entitled “Microbiome Changed by Gluten Increases Incidences of Type 1 Diabetes“, since gluten sensitivities is common with CFS and there are similarities to Type-3 diabetes, I thought that I should drill down on this via PubMed. 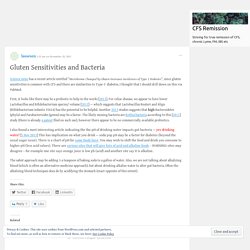 First, it looks like there may be a probiotic to help in the works [2013]. For celiac disease, we appear to have lower Lactobacillus and Bifidobacterium species/ volume [2012] — which suggests that Lactobacillus Reuteri and Align (Bifidobacterium infantis 35624) has the potential to be helpful. Another 2013 studies suggests that high Bacteroidetes (phyla) and Parabacteriodes (genus) may be a factor.

The likely missing bacteria are Rothia bacteria according to this [2011] study (there is already a patent filed on such use), however there appear to be no commercially available probiotics. I also found a most interesting article indicating the the pH of drinking water impacts gut bacteria — yes drinking water! The influence of a short-term gluten-free diet on the human gut microbiome. Cooling Inflammation: Antibiotics, Gut Flora, Food Intolerance and Disease.

Cattle Are Finished by Selective Killing of Gut Flora. 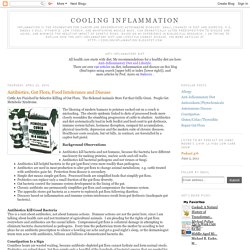 The Sickened Animals Store Fat that Grills Great. People Get Metabolic Syndrome. The likening of modern humans to potatoes sacked out on a couch is misleading. The obesity epidemic linked to diets of processed foods more closely resembles the stumbling progression of cattle to abattoir.