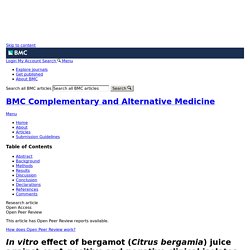 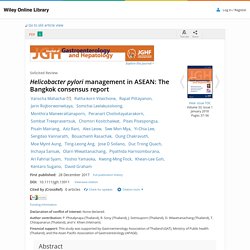 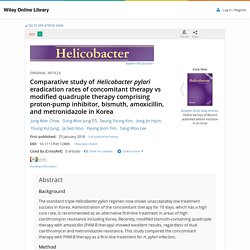 Administration of the concomitant therapy for 10 days, which has a high cure rate, is recommended as an alternative first-line treatment in areas of high clarithromycin resistance including Korea. GASTROENTEROLOGY - JANV 2018 - Prevalence of Helicobacter pylori Infection in Asia: Remembrance of Things Past? KAROLINSKAINSTITUTE - 2017 - Helicobacter pylori eradication in the Swedish population. NUTRITION AND CANCER 22/09/17 Can Diet Modulate Helicobacter pylori-associated Gastric Pathogenesis? An Evidence-Based Analysis. TURKISH JOURNAL OF MEDICAL SCIENCES - 2017 - Prevalence and risk factors for Helicobacter pylori infection in southwest China: a study of health examination participants based on 13C-urea breath test.

Int. J. Mol. Sci. 2018, 19(2), 338; The Prevalence of Helicobacter pylori in Estonian Bariatric Surgery Patients. Helicobacter pylori (Hp) is one of the most important human pathogens that can cause duodenal and gastric ulcers, gastritis and stomach cancer. 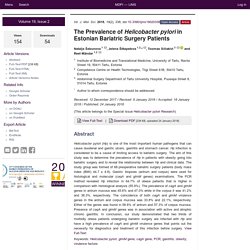 Hp infection is considered to be a cause of limiting access to bariatric surgery. The aim of this study was to determine the prevalence of Hp in patients with obesity going into bariatric surgery and to reveal the relationship between Hp and clinical data. The study group was formed of 68 preoperative bariatric surgery patients (body mass index (BMI) 44.7 ± 4.8). Gastric biopsies (antrum and corpus) were used for histological and molecular (caqA and glmM genes) examinations. The PCR method revealed Hp infection in 64.7% of obese patients that is higher in comparison with histological analysis (55.9%). This is an open access article distributed under the Creative Commons Attribution License which permits unrestricted use, distribution, and reproduction in any medium, provided the original work is properly cited. 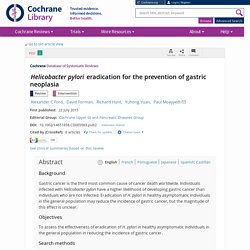 Background People with H. pylori infection are more likely to develop gastric cancer than people who are not infected with the bacterium. Study characteristics A literature search up to December 2013 found 6 trials (containing 6497 participants, 3 trials at low risk of bias). Key results Quality of the evidence Three trials were at low risk of bias, one trial was at unclear risk, and two trials were at high risk of bias. Résumé simplifié. Helicobacter. 2015 Sep;20 Suppl 1:1-7. Epidemiology and Diagnosis of Helicobacter pylori infection.

During the period reviewed, prevalence studies were essentially performed in less economically advanced countries and a high prevalence was found. 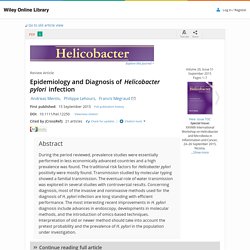 World J Gastrointest Pharmacol Ther. 2016 Feb 6;7(1):126-32. Helicobacter pylori and its reservoirs: A correlation with the gastric infection. Helicobacter pylori (H. pylori) is a gram-negative and microaerophilic bacterium that has been associated with some certain diseases, including chronic gastritis, peptic ulcers, gastric cancer, and mucosa-associated lymphoid tissue (MALT) lymphoma. 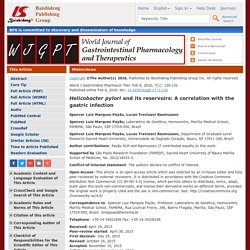 In 1994, the International Agency for Research on Cancer of the World Health Organization defined H. pylori as a Group 1 carcinogen[1,2]. It is estimated that the H. pylori is present in the stomachs of 50% of the world’s population, but despite this high prevalence, we do not yet clearly understand its transmission. Possible routes are oral-oral and fecal-oral, but no consensus has been reached[3]. Currently, the main area of research into natural reservoirs for H. pylori has included oral H. pylori with gastric infection and the presence of H. pylori in the stomach[1,4]. Many studies have suggested that the primary reservoir for H. pylori is the oral cavity, but overall, the results have been very inconsistent[1-7].

PLOS 10/01/18 Metallochaperone UreG serves as a new target for design of urease inhibitor: A novel strategy for development of antimicrobials (concerne Helicobacter pilory) (avertissement de PLOS : This is an uncorrected proof.) Abstract Urease as a potential target of antimicrobial drugs has received considerable attention given its versatile roles in microbial infection. 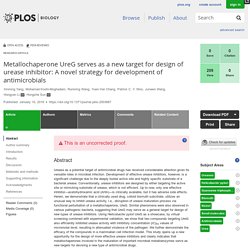 Development of effective urease inhibitors, however, is a significant challenge due to the deeply buried active site and highly specific substrate of a bacterial urease. Conventionally, urease inhibitors are designed by either targeting the active site or mimicking substrate of urease, which is not efficient. Up to now, only one effective inhibitor—acetohydroxamic acid (AHA)—is clinically available, but it has adverse side effects. Herein, we demonstrate that a clinically used drug, colloid bismuth subcitrate, utilizes an unusual way to inhibit urease activity, i.e., disruption of urease maturation process via functional perturbation of a metallochaperone, UreG. Author summary Academic Editor: Matthew Waldor, Brigham and Women's Hospital, United States of America. INTECH - AVRIL 2012 - Zoonosis. Au sommaire: Helicobacter - An Emerging New Zoonotic Pathogen. 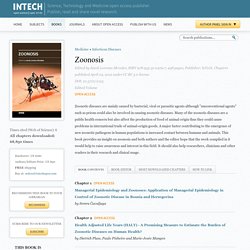 Many of the zoonotic diseases are a public health concern but also affect the production of food of animal origin thus they could cause problems in international trade of animal-origin goods. A major factor contributing to the emergence of new zoonotic pathogens in human populations is increased contact between humans and animals. This book provides an insight on zoonosis and both authors and the editor hope that the work compiled in it would help to raise awareness and interest in this field. It should also help researchers, clinicians and other readers in their research and clinical usage. THE LANCET 04/02/12 Treatment of Helicobacter pylori in Latin America. In their multisite study, Robert Greenberg and colleagues1 attempted to identify a reliably effective treatment for Helicobacter pylori for use in Latin America. 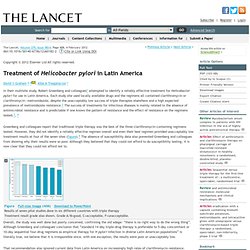 Each study site used locally available drugs and the regimens all contained clarithromycin or clarithromycin—metronidazole, despite the unacceptably low success of triple therapies elsewhere and a high expected prevalence of metronidazole resistance.2 The success of treatments for infectious diseases is mainly related to the absence of antimicrobial resistance and is predictable if one knows the pattern of resistance and the effect of resistance on the regimens tested.3, 4 Results of seven pilot studies done in six different countries with triple therapy Treatment result grade also shown. Grade A/B=good, C=acceptable, F=unacceptable. Overall, the study was well done but poorly conceived, confirming the old adage: “there is no right way to do the wrong thing”. CMAJ January 10, 2012 vol. Helicobacter pylori and immigrant health.