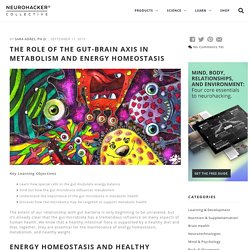 We know that a healthy intestinal flora is supported by a healthy diet and that, together, they are essential for the maintenance of energy homeostasis, metabolism, and healthy weight. Energy Homeostasis and Healthy Weight Energy homeostasis is the balance the body achieves from all the processes involved with the energy we take in (e.g., calories) and use.

The gastrointestinal (GI) tract is the major source of information about our energy intake. Akkermansia muciniphila. A review of recent updates about the contribution made by gut microbes and metabolites to obesity and related metabolic disorders.

A Complex Disorder. Factors that likely contribute to obesity include disruptions to intercellular signaling, increased inflammation, and changes to the gut microbiome. 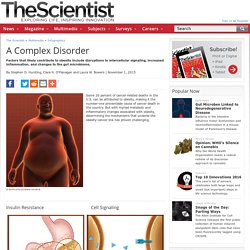 Some 20 percent of cancer-related deaths in the U.S. can be attributed to obesity, making it the number-one preventable cause of cancer death in the country. But with myriad metabolic and inflammatory changes associated with obesity, determining the mechanisms that underlie the obesity-cancer link has proven challenging. Insulin Resistance Cell Signaling Active Adipocytes Inflammation. Processed food, obesity and flagella – Rosemary Cottage Clinic Blog. Emulsifiers used in processed foods from ice cream to baked products have been implicated in obesity. 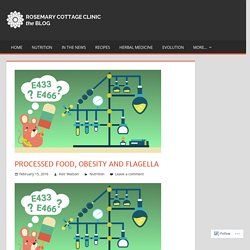 Earlier research in mice has now been extended using a model human gut, paving the way for human trials. Read on for the implications: Emulsifiers and obesity The relationship between processed foods, obesity and diabetes has not gone unnoticed. Societies that stick to traditional, unprocessed foods have lower levels of these diseases than countries that consume more industrial products. Microbiota and obesity: Is it all hype? Obesity and the microbiome — The American Microbiome Institute. An article was published late last year by Jeff Gordon which studied the impact of human's microbiome in mice. 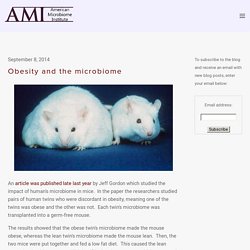 In the paper the researchers studied pairs of human twins who were discordant in obesity, meaning one of the twins was obese and the other was not. Each twin's microbiome was transplanted into a germ-free mouse. Involvement of gut microbiota in the development of low-grade inflammation and type 2 diabetes associated with obesity. Could a leaky gut be making you fat? Research finds link between gut fungi, bacteria and obesity. New research suggests that yeast fungus and certain types of bacteria in the gut may contribute to obesity as well as fuel gut inflammatory disorders, like Crohn's disease. 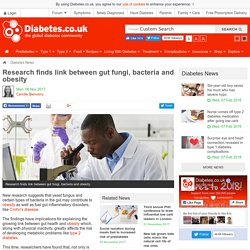 The findings have implications for explaining the growing link between gut health and obesity which, along with physical inactivity, greatly affects the risk of developing metabolic problems like type 2 diabetes. This time, researchers have found that, not only is there more evidence that an imbalance of gut bacteria can have an impact on metabolic health, it is likely that another factor (fungi) plays into this.

The results come from two independent studies, led by the University of Minnesota and a team of scientists at the centre for Medical Mycology, in Cleveland, USA. Gut fungi might be linked to obesity and inflammatory bowel disorders. Endotoxemia and Weight Regulation. Disease Begins in the Mucus. Intestinal Permeability and Visceral Fat Accumulation. Bacteria and obesity: Reviewing the connection between gut bacteria, obesity, and diet. Microbesity. ANDRZEJ KRAUZEA decade ago, gut microbiologist and genomicist Jeffrey Gordon’s postdoc Fredrik Bäckhed at Washington University in St. 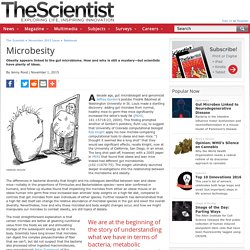 Louis made a startling discovery: adding gut microbes from normal, healthy mice to germ-free mice significantly increased the latter’s body fat (PNAS, 101:15718-23, 2004). This finding prompted another of Gordon’s postdocs, Ruth Ley, to suggest that University of Colorado computational biologist Rob Knight apply his new microbe-comparing computational tools to obese and lean mice. “I thought it seemed like a long shot” that they would see significant effects, recalls Knight, now at the University of California, San Diego, in an email.

An obese-type gut microbiome can lead to neurobehavioral pathology — The American Microbiome Institute. Obesity is a complex condition with an extensive range of health complications. 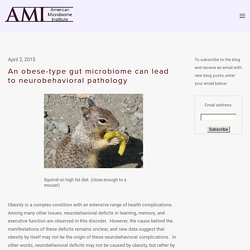 Among many other issues, neurobehavioral deficits in learning, memory, and executive function are observed in this disorder. However, the cause behind the manifestations of these deficits remains unclear, and new data suggest that obesity by itself may not be the origin of these neurobehavioral complications. In other words, neurobehavioral deficits may not be caused by obesity, but rather by the microbiome that develops from the high-fat diet that leads to obesity. A recent study supports this supposition, demonstrating that an “obese-specific” gut microbiome may be the driving force behind these neurobehavioral complications. Researchers hypothesized that microbiome communities that develop from a sustained high-fat diet could by themselves induce neurobehavioral maladies, independent of diet, adipose fat accumulation, and/or metabolic dysfunction. 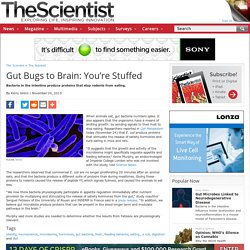 FLICKR, NIAIDWhen animals eat, gut bacteria numbers spike. It also appears that the organisms have a means of limiting growth: by sending signals to their host to stop eating. New study suggests gut microbiome directly influences BMI, triglyceride, and HDL levels — The American Microbiome Institute. The microbiome has long been associated with cardiovascular disease, especially after studies showing differences between the gut microbiomes of obese and slim individuals. 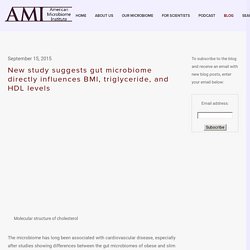 The mechanisms by which the microbiome may be influencing heart disease are still unknown, but there are a few mechanisms that have been identified. For example, as has been previously discussed on this blog, trimethylamine N-oxide (TMAO) in the blood is an independent risk factor for atherosclerosis, and is produced by gut bacteria from choline and carnitine. In addition, systemic, chronic inflammation is associated with heart disease, and our avid readers will know that the microbiome can cause chronic inflammation in the vagina, gut, and mouth. Overall though, a direct relationship between specific bacteria and heart disease has not been shown. A recent epidemiological study though, did just that. The scientists measured the genomes, microbiomes, BMI, and blood lipids of 1500 adults. 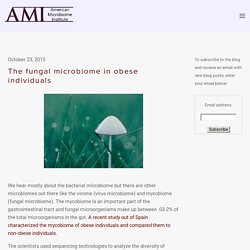 The mycobiome is an important part of the gastrointestinal tract and fungal microorganisms make up between .03-2% of the total microorganisms in the gut. A recent study out of Spain characterized the mycobiome of obese individuals and compared them to non-obese individuals. The Curious Case of the Gluten Free Mice. How Your Gut Microbiota Can Make You Fat (or thin) - Selfhacked. Could Gut Bacteria Be to Blame for Your Stubborn Belly Fat? We know how important gut health is for overall health. We understand that it improves digestion, that our pursuit of extreme sterility has compromised our immune systems, and that the gut biome is etiologically involved in the pathogenesis of various health and disease states. We’re even familiar with the more esoteric functions of gut bacteria, like converting antinutrients into biovailable nutrients, synthesizing sex hormones and neurotransmitters, and mitigating the allergenicity of gluten.

But what about gaining and losing body fat, the real reason most people get interested in diet in the first place—are the bacteria in your gut responsible for the fat on it? Maybe. Dietary Fiber Intake Protects against Diet-Induced Obesity and Metabolic Syndrome. Zou et al found the fermentable fiber inulin restored gut health and protected mice against metabolic syndrome induced by a high-fat diet by restoring gut microbiota levels, increasing the production of intestinal epithelial cells and restoring IL-22 expression, which prevented gut microbiota from invading epithelial cells.

Jun Zou et al. 2018. Gut Microbes, Obesity, and the Circadian Rhythm – Chronobiology.com. How much does the amount of sleep you get affect your overall energy and mood? Most people would agree that getting enough sleep on a regular basis is very important for a person’s well-being and performance in life’s tasks. Not only is the amount of sleep important, but also our sleep cycles are critical, like when we work the night shift or experience jet lag, our bodies pay the price for not being on a natural cycle. Obesity and the daily cycle of the microbiome — The American Microbiome Institute. We recently wrote a blog about an article discussing how sleeping patterns affected the microbiome and may contribute to obesity, but what about eating patterns? A paper published last week in Cell Metabolism aimed to answer this question.

From a microbiome science standpoint, this study demonstrates the need to consider diurnal cycles when making microbiome measurements. How to Lose Weight by Balancing Your Gut. Can Gut Dysbiosis Sabotage Weight Loss. Dieting? Your gut microbes might delay the benefits. Gut flora dictates how much weight we can lose. Gut Microbes Signal To Your Brain When They Are Full. Don’t have room for dessert? The bacteria in your gut may be telling you something. Twenty minutes after a meal, gut microbes produce proteins that can suppress food intake in animals, reports a study published in Cell Metabolism. The researchers also show how these proteins injected into mice and rats act on the brain reducing appetite, suggesting that gut bacteria may help control when and how much we eat. The new evidence coexists with current models of appetite control, which involve hormones from the gut signalling to brain circuits when we’re hungry or done eating. When you eat and what you eat may lead to obesity — The American Microbiome Institute.

Our bodies’ internal circadian clock may be profoundly important to our health, especially as it pertains to our metabolism. Research has shown that people who have altered sleep cycles, like those who work the night shift, are at an increased risk for diabetes, obesity, and metabolic syndrome. Potatoes, Resistant Starch, and Weight Loss. Prebiotics and Weight Regulation. Akkermansia muciniphila Prebiotics and Obesity. Gastric bypass surgery alters microbiome which possible contributes to weight loss — The American Microbiome Institute. The researchers compared the microbiomes of women that were obese and hadn’t had surgery with those who were of similar BMI presurgery, but had undergone surgery at least nine years earlier.

They observed some major differences in the women’s microbiomes, with the post-operative women had much higher levels of Gammaproteobacteria and lower levels of Firmicutes. When the scientists looked at actual genetic variations they found many differences. Some notable differences were a decrease in short chain fatty acid (SCFA) and in increase in trimethylamine N-oxide (TMAO) creation in women who had surgery. As we have written about in this blog before, SCFAs are often associated with health, while TMAO is a risk factor for some cardiovascular diseases. Gastric bypass surgery is often a last resort for folks that have severe obesity. Effect of caloric restriction on gut permeability, inflammation markers, and fecal microbiota in obese women. Gut Microbiome After Weight-Loss Surgery. Altered Microbiome Contributes to Exaggerated Post-Diet Weight Regain in Mice. Obesity-associated microbiome composition can persist after weight loss, affecting the exchange of metabolites between a mouse and its resident bugs, researchers report.

Weight loss yo-yo: How the gut reverses effects of dieting. Microbiome based therapy prevents weight gain in obese individuals — The American Microbiome Institute. Many people have heard that eating fiber is good for your health and helps to prevent weight gain. One of the reasons for this, as we have blogged about before, is thought to be related to the short chained fatty acids (SCFAs) that are produced by the microbiome from fiber. The role of probiotics in treating metabolic disorders - Gut Microbiota for Health. Numerous studies focused on the role of probiotics have permitted to enlarge our knowledge of the potential use of an increasing number of probiotic strains in host’s physiology.

In this critical review, Le Barz and co-workers examined the most recent studies concerning the effects of probiotic bacterial strains in the prevention or treatment of metabolic disorders, such as obesity, insulin resistance or diabetes mellitus. Do You Have the Gut(s) to Lose 8% Belly Fat in 12 Weeks? Lactobacillus gasseri (LG2055) Can Fix Your Gut Problems - SuppVersity: Nutrition and Exercise Science for Everyone. Carbohydrates: Why quality trumps quantity. Soybean Oil and Metabolic Syndrome. How Fats Influence the Microbiome. “This paper, which had nicely controlled conditions, demonstrated that type of fat is really important for shaping microbial communities and their functional dynamics, which in turn impact our health,” said Vanessa Leone, a postdoc studying host-microbe interactions at the University of Chicago who was not involved in the study.