Dramatic Benefits of Friendly Flora in Type 2 Diabetic Patients. Gut Bacterium Helping To Reverse Insulin Resistance. Alongside of Lactibacillus and Bifidobacterium there is a new health promoting gut bacterium in town called Akkermansia muciniphila, but you will not find its benefits in a bowl of yogurt, as published in the journal Science Translational Medicine. 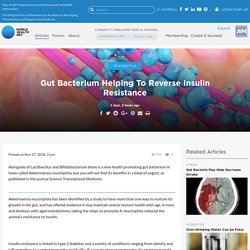 Akkermansia muciniphila has been identified by a study to have more than one way to nurture its growth in the gut, and has offered evidence it may maintain and/or restore health with age. In mice and donkeys with aged metabolisms, taking the steps to promote A. muciniphila reduced the animal’s resistance to insulin. Insulin resistance is linked to type 2 diabetes and a variety of conditions ranging from obesity and inflammation, to sagging immunity and frailty. If a way to slow or reverse insulin resistance could be found it may have broad anti-aging effects to many of these conditions. Probiotics Have Adjunctive Role in Diabetes Care. Gut Bacteria Imbalance and Diabetes.

Gut bacteria compound may help to prevent type 2 diabetes. Targeting gut microbiota as a possible therapy for diabetes. Poop swaps, insulin resistance, and Resistant Starch. File this under: “Why aren’t we talking more about this?!” 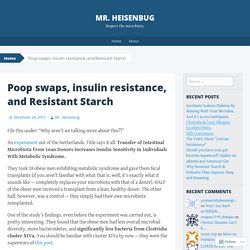 They took 18 obese men exhibiting metabolic syndrome and gave them fecal transplants (if you aren’t familiar with what that is, well, it’s exactly what it sounds like — completely replaces your microbiota with that of a donor). HALF of the obese men received a transplant from a lean, healthy donor. The other half, however, was a control — they simply had their own microbiota reimplanted. One of the study’s findings, even before the experiment was carried out, is pretty interesting. They found that the obese men had less overall microbial diversity, more bacteroidetes, and significantly less bacteria from Clostridia cluster XIVa.

But on to the experiment. Well, in observing the differences between the lean-donor recipients and the self-donor recipients, they found a few things: lean-donor recipients had more overall diversity. They also found an increase in E. halli, another major butyrate producer in Clostridia XIVa. New diabetes drug incorporates microbiome therapy — The American Microbiome Institute. Gutness Gracious Me: Does diabetes start in the intestines? Gut Microbes Are Different Among the Obese and Diabetics. Link Between Gut Bacteria and the Development of Diabetes. Comparison of gut microbiota in adult patients with type 2 diabetes and healthy individuals. JavaScript is disabled on your browser. 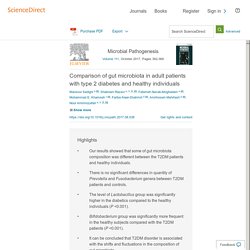 Please enable JavaScript to use all the features on this page. Highlights Our results showed that some of gut microbiota composition was different between the T2DM patients and healthy individuals. There is no significant differences in quantity of Prevotella and Fusobacterium genera between T2DM patients and controls. The level of Lactobacillus group was significantly higher in the diabetics compared to the healthy individuals (P <0.001). Bifidobacterium group was significantly more frequent in the healthy subjects compared with the T2DM patients (P <0.001). A metagenome-wide association study of gut microbiota in type 2 diabetes. Repeated Antibiotic Use Linked to Higher Risk of Diabetes.

Intestinal Permeability and Visceral Fat Accumulation. Prebiotics Obesity and Type 2 Diabetes. Endotoxemia And Diabetes Risk. Insulin Resistance. Diabetes: Look after your teeth to look after your blood glucose. Interactions of microbiome, diet, and genetics modulate predispostion to diabetes and metabolic syndrome — The American Microbiome Institute. They used two strains of mice from the Jackson Laboratory (B6J and 129J) and one strain from Taconic Farms (129T). 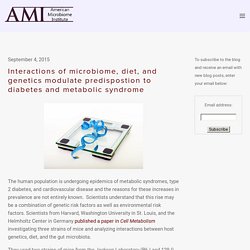 They Taconic strain is very similar to the 129J strain from Jax however it is given a probiotic, resulting in a difference in its gut microbiome. They also inbred the three strains for several generations to create environmentally normalized mouse groups. They found that the Taconic 129T mice were similar to the 129J mice in their development of diet induced obesity after a high-fat diet but they only developed mild glucose intolerance in comparison to the Jax mouse strain. After inbreeding these mice for three generations in the same environment, these differences were lost. After analysis including 16s sequencing, the original differences in phenotypes and the changes following inbreeding normalization were a result of microbiome differences and microbiome differences were largely dependent on diet, host genetics, and environmental history. 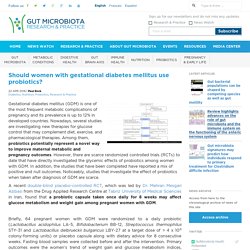 Nowadays, several studies are investigating new therapies for glucose control that may complement diet, exercise, and pharmacological therapies. Among them, probiotics potentially represent a novel way to improve maternal metabolic and pregnancy outcomes. However, there are scarce randomized controlled trials (RCTs) to date that have directly investigated the glycemic effects of probiotics among women with GDM. In addition, the studies that have been completed have reported a mix of positive and null outcomes. Noticeably, studies that investigate the effect of probiotics when taken after diagnosis of GDM are scarce. A recent double-blind placebo-controlled RCT, which was led by Dr. Gut as an emerging organ for the treatment of diabetes. + Author Affiliations Correspondence: Martin Haluzik, Email: mhalu@lf1.cuni.cz. 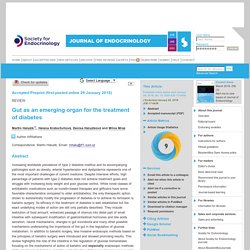 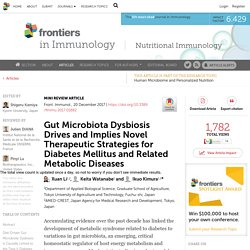 T2DM is essentially linked to obesity and the pathophysiology of both entails facets of gene–diet/lifestyle interactions. Prevotella in the gut appears to improve glucose tolerance — The American Microbiome Institute. The scientists gave 39 subjects white bread and barley bread for three consecutive days and measured their glucose and insulin responses to the diets. 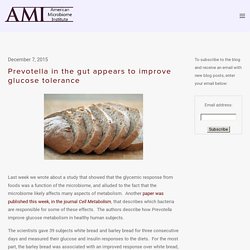 For the most part, the barley bread was associated with an improved response over white bread, but some of the individuals’ responded with a much more stark improvement than others. The scientists then measured the gut microbiomes of each individual and noted that the microbiome changed in the most responsive individuals, and this change was characterized by an increase in Prevotella (specifically Prevotella copri) and methanogenic archaea.

The opposite effect was seen in the individuals that responded least to the barley bread intervention. The scientists then confirmed these results in mice. Mice that were given fecal microbiota transplants from human responders, or P. copri probiotics had improved glycemic responses to high fiber diets than control mice. Ingesting blueberries and oats may modulate the microbiome and help diabetics — The American Microbiome Institute. Prebiotics are foods that are consumed in order to modulate the microbiome. 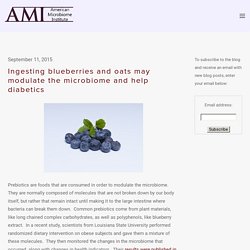 They are normally composed of molecules that are not broken down by our body itself, but rather that remain intact until making it to the large intestine where bacteria can break them down. Common prebiotics come from plant materials, like long chained complex carbohydrates, as well as polyphenols, like blueberry extract. In a recent study, scientists from Louisiana State University performed randomized dietary intervention on obese subjects and gave them a mixture of these molecules. They then monitored the changes in the microbiome that occurred, along with changes in health indicators. Impact of Dietary Fiber Consumption on Insulin Resistance and the Prevention of Type 2 Diabetes. Skip to Main Content Sign In Register Close Advanced Search Online ISSN 1541-6100 Print ISSN 0022-3166 Copyright © 2018 American Society for Nutrition Connect Resources Explore Oxford University Press is a department of the University of Oxford. 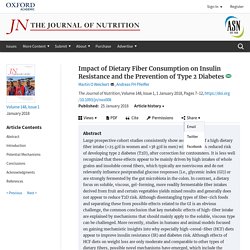 Close This Feature Is Available To Subscribers Only. Microbiome affects blood glucose levels after eating, can help predict glycemic response to foods — The American Microbiome Institute. The researchers catalogued 800 peoples’ meals over 7 days while continuously measuring their blood glucose levels. In addition they monitored their gut microbiota, weight, sleep, and various other lifestyle factors.

After evaluating the data, the scientists realized that identical foods had vastly different PPGRs. For example, bread could have a 8 fold variation in glycemic response depending on the individual. A high fibre diet may promote specific short-chain fatty acid producers to achieve better metabolic control in type 2 diabetes. Could a Gluten-free Diet Reduce Your Risk of Diabetes? Artificial Sweeteners Linked to Negative Effects on Gut Microbes. Artificial Sweeteners Cause Gut Bacteria Changes.