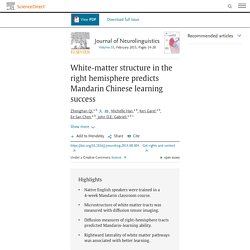 Microstructure of white matter tracts was measured with diffusion tensor imaging. The effects of bilingualism on the white matter structure of the brain. Author Affiliations Edited by Patricia K. 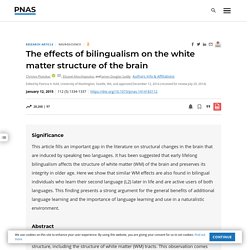 Kuhl, University of Washington, Seattle, WA, and approved December 12, 2014 (received for review July 29, 2014) Significance. An fMRI study of language lateralization in children and adults. The ontogenesis of language lateralization and its relation to handedness. Structural brain changes related to bilingualism: does immersion make a difference? Introduction Experience-dependent changes in brain structure were first investigated in rodents placed in environmentally enriched versus very sparsely equipped standard cages. 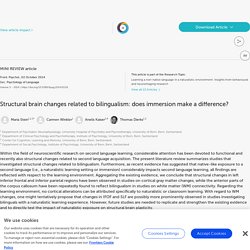 These early animal studies reported effects of environmental enrichment on brain weight (Rosenzweig et al., 1962) or cortical thickness (Rosenzweig et al., 1972) suggesting a structural adaptation process of the brain in response to experience. Since then, experience-dependent changes in human brain structure have been investigated in relation to various learning experiences, ranging from complex visuo-motor tasks like juggling to musical proficiency as well as to various aspects of language learning (see, e.g., May, 2011; Zatorre et al., 2012; Lovden et al., 2013).

A large proportion of the world’s population is estimated to be bi- or multilingual (Bialystok, 2010; Grosjean and Li, 2013) and the importance of the ability to communicate in more than one language is even increasing in a globalized world. TABLE 1. The perineuronal net and the control of CNS plasticity. Disruption of the perineuronal net in the hippocampus or medial prefrontal cortex impairs fear conditioning.

Abstract The perineuronal net (PNN) surrounds neurons in the central nervous system and is thought to regulate developmental plasticity. 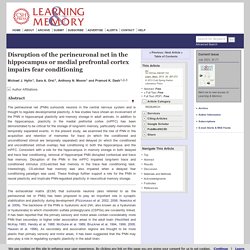 A few studies have shown an involvement of the PNN in hippocampal plasticity and memory storage in adult animals. In addition to the hippocampus, plasticity in the medial prefrontal cortex (mPFC) has been demonstrated to be critical for the storage of long-term memory, particularly memories for temporally separated events. U.pdf. Cerebral asymmetry and language development: cause, correlate or consequence? IDA_DSM-5%20Changes.pdf. Deficits in short-term memory in adult survivors of childhood abuse. Untitled. Attention, Learning, and Memory in Posttraumatic Stress Disorder. Specific%20Learning%20Disorder%20Fact%20Sheet.pdf. Does PTSD Cause Learning Disabilities? Specific Learning Disorder. This developmental disorder involves difficulties learning and using academic skills. 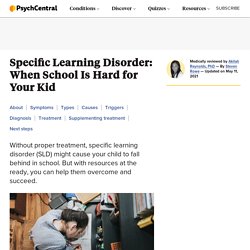 “Specific Learning Disorder” has become the umbrella term for mathematics, reading, and written expression disorders in the updated DSM-5. The DSM-IV previously classified these as separate diagnoses. Instead, these disorders are now housed under one diagnosis with added specifiers (e.g., specific learning disorder with impaired reading). The biological origin of a learning disorder is likely an interaction of genetic and environmental factors, which affect the brain’s ability to perceive or process verbal or nonverbal information efficiently and accurately. Key academic skills of deficit include reading of single words accurately and fluently, reading comprehension, written expression and spelling, arithmetic calculation, and mathematical reasoning (solving math problems). A key feature is that the individual’s performance in a particular area is well below average for age. 1. 2. 3.

Role of MRI in Epilepsy. 00_Nutt_McLellan.pdf. Uncovering the Hidden Risk Architecture of the Schizophrenias: Confirmation in Three Independent Genome-Wide Association Studies. Complex diseases, such as schizophrenia, may be influenced by hundreds or thousands of genetic variants that interact with one another in complex ways, and consequently display a multifaceted genetic architecture (1). 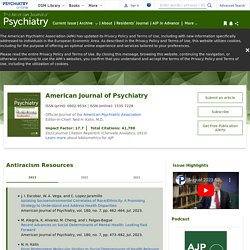 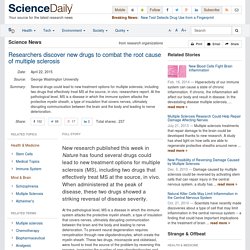 When administered at the peak of disease, these two drugs showed a striking reversal of disease severity. At the pathological level, MS is a disease in which the immune system attacks the protective myelin sheath, a type of insulation that covers nerves, ultimately disrupting communication between the brain and the body and leading to nerve deterioration. 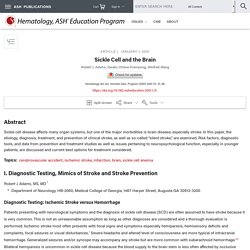 Diagnostic Testing, Mimics of Stroke and Stroke Prevention Robert J. Adams, MS, MD * Diagnostic Testing: Ischemic Stroke versus Hemorrhage Patients presenting with neurological symptoms and the diagnosis of sickle cell disease (SCD) are often assumed to have stroke because it is very common. The presence of fever, antecedent symptoms and other risk factors for stroke should enter into the diagnostic consideration. Brain Parenchymal Imaging After physical and neurological examination is performed, the most common next step is a cranial computerized tomography (CT) scan without contrast. Cranial magnetic resonance imaging (MRI) is usually the next step to accomplish one of several objectives. Neurofibromatosis — Why choose Mayo Clinic. Neurofibromatosis is a genetic disorder that disturbs cell growth in your nervous system, causing tumors to form on nerve tissue. 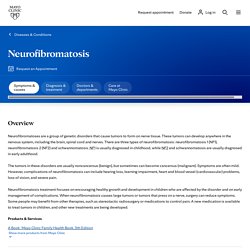 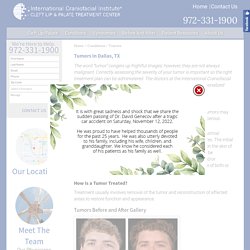 Neurofibromatosis grows around the nerve cells/sheaths and affects all nearby tissues: skin, the layer below the skin (subcutaneous) and bone. Typically, neurofibromatosis is first noticed as patches of "café au lait" colored areas of skin which look like birthmarks. Then, the neurofibromatosis nodules themselves are noted. Human biology - How does the brain's energy consumption depend on mental activity? - Biology Beta - Stack Exchange. I answered on the facts of this question already on skeptics.SE, here and here. You should read both papers very carefully, I highlighted the most important facts but this is a very tricky question, esp. when it comes to defining what mental activitiy is. The papers also give an explanation of how fMRI signal is linked to NEURONAL activity, as far as I remember there is no strong direct link.

You assume in your question that a mathematician solving a differential equation needs higher mental activity than a child reading a book. Is this legitimate?