By Dyani Lewis Subtle differences in brain function, personality and social development can determine whether you're a lion or a pussycat when you drink. 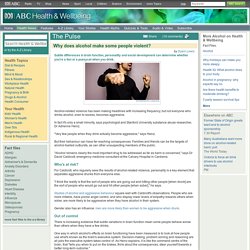 [Image source: iStockPhoto | lofilolo] Alcohol-related violence has been making headlines with increasing frequency, but not everyone who drinks alcohol, even to excess, becomes aggressive. In fact it's only a small minority, says psychologist and Stanford University substance abuse researcher, Dr Adrienne Heinz. "Very few people when they drink actually become aggressive," says Heinz.

But their behaviour can have far-reaching consequences. "Alcohol remains clearly the most important drug to be addressed as far as harm is concerned," says Dr David Caldicott, emergency medicine consultant at the Calvary Hospital in Canberra. Who's at risk? For Caldicott, who regularly sees the results of alcohol-related violence, personality is a key element that separates aggressive drunks from everyone else. Out of control Alert and alarmed Expectations matter.

Of Exercise: MedlinePlus Health News. THURSDAY, Nov. 3, 2016 (HealthDay News) -- Whether you get pumped up for gym time or you'd rather crawl back into bed if someone mentions exercise, your genes might be to blame, a new study suggests. 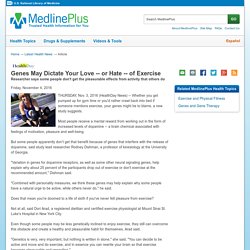 Most people receive a mental reward from working out in the form of increased levels of dopamine -- a brain chemical associated with feelings of motivation, pleasure and well-being. But some people apparently don't get that benefit because of genes that interfere with the release of dopamine, said study lead researcher Rodney Dishman, a professor of kinesiology at the University of Georgia. "Variation in genes for dopamine receptors, as well as some other neural signaling genes, help explain why about 25 percent of the participants drop out of exercise or don't exercise at the recommended amount," Dishman said.

"Combined with personality measures, we think these genes may help explain why some people have a natural urge to be active, while others never do," he said. Year 10 - Issues in Sport. Our Immune System - Pfizer - Cortical Studios / Glow Studio. Comments. Stuff like this is why people don't view feminism as an equality movement. 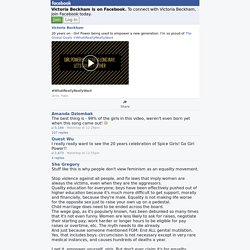 Stop violence against all people, and fix laws that imply women are always the victims, even when they are the aggressors. Quality education for everyone; boys have been effectively pushed out of higher education because it's much more difficult to get support, morally and financially, because they're male. Equality is not making life worse for the opposite sex just to raise your own up on a pedestal. Child marriage does need to be ended across the board.

The wage gap, as it's popularly known, has been debunked so many times that it's not even funny. Finally a sanitary pad advertisement done right! Girls Take Photos Of Things They're Banned From While Menstruating. Businessinsider.com. In a shift from its traditional road safety campaigns, the Transport Accident Commission has collaborated with a leading trauma surgeon, a crash investigation expert and a world-renowned Melbourne artist to produce ‘Graham’, an interactive lifelike model demonstrating human vulnerability. 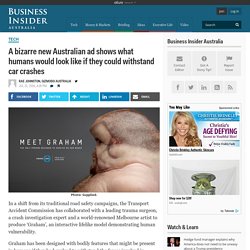 Graham has been designed with bodily features that might be present in humans if they had evolved to withstand the forces involved in crashes. Studies have shown that the human body can only cope with impacts at speeds people can reach on their own, unassisted by vehicles. “People can survive running at full pace into a wall but when you’re talking about collisions involving vehicles, the speeds are faster, the forces are greater and the chances of survival are much slimmer,” TAC chief executive officer Joe Calafiore said. A bizarre new Australian ad shows what humans would look like if they could withstand car crashes. Top group calls for new laws and education for sexually active young people. 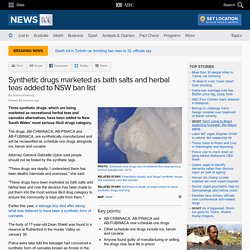 AB-CHMINACA, AB-PINACA and AB-FUBINACA now schedule one drugsOther schedule one drugs include ice, heroin and cocaineAnyone found guilty of manufacturing or selling the drugs now face life in prison The drugs, AB-CHMINACA, AB-PINACA and AB-FUBINACA, are synthetically manufactured and will be reclassified as schedule one drugs alongside ice, heroin and cocaine. Attorney-General Gabrielle Upton said people should not be fooled by the synthetic tags. "These drugs are deadly. "These drugs have been marketed as bath salts and herbal teas and now the decision has been made to put them into the most serious illicit drug category to ensure the community is kept safe from them.

" Earlier this year, a teenage boy died after taking what was believed to have been a synthetic form of cannabis. » Growing Up Fast: Why 12-Year-Old Girls Are Having Sex Rougher, Earlier.