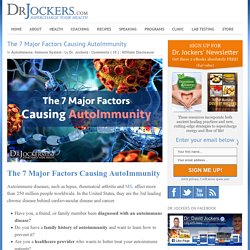 In the United States, they are the 3rd leading chronic disease behind cardiovascular disease and cancer. 10 Signs You Have an Autoimmune Disease (and How to Reverse It) A quick note from our founder- Over the past year, my friend Dave at PaleoHacks has been working on a secret cookbook with world-renowned Le Cordon Bleu chef Peter Servold. 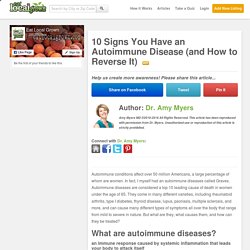 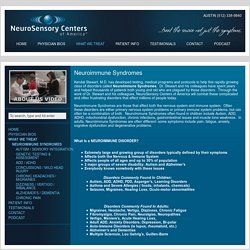 Dr. Stewart and his colleagues have spent years and helped thousands of patients both young and old who are plagued by these disorders. Through the work of Dr. Effects on Plastic Products on Autoimmune disease and Thyroid Function- by Dr. Kharrazian. Everything You Need To Know About Histamine Intolerance. The Alkaline Diet: Myth Or Must? 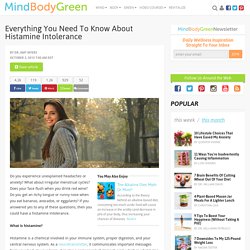 According to the theory behind an alkaline-based diet, consuming too much acidic food will cause an increase in the acidity (and decrease in pH) of your body, thus increasing your chances of diseases Read. How to Stop Attacking Yourself: 9 Steps to Heal Autoimmune Disease. INFLAMMATION IS A “HOT” TOPIC IN MEDICINE. 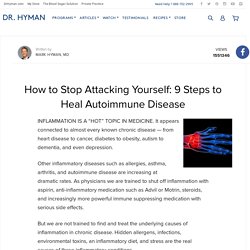 It appears connected to almost every known chronic disease — from heart disease to cancer, diabetes to obesity, autism to dementia, and even depression. Other inflammatory diseases such as allergies, asthma, arthritis, and autoimmune disease are increasing at dramatic rates. As physicians we are trained to shut off inflammation with aspirin, anti-inflammatory medication such as Advil or Motrin, steroids, and increasingly more powerful immune suppressing medication with serious side effects.

But we are not trained to find and treat the underlying causes of inflammation in chronic disease. Hidden allergens, infections, environmental toxins, an inflammatory diet, and stress are the real causes of these inflammatory conditions. Signs, Symptoms, & Diagnosis. Huntington's Disease (HD) is a progressive brain disorder caused by a defective gene. 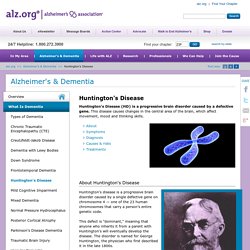 This disease causes changes in the central area of the brain, which affect movement, mood and thinking skills. About Huntington's Disease George Huntington, M.D., who first described the disease that bears his name. Huntington's disease is a progressive brain disorder caused by a single defective gene on chromosome 4 — one of the 23 human chromosomes that carry a person’s entire genetic code.

This defect is "dominant," meaning that anyone who inherits it from a parent with Huntington's will eventually develop the disease. The defective gene codes the blueprint for a protein called huntingtin. Implications for Children When Mothers Have Autoimmune Disease. By: Terri Forehand, RN in Kids + Life04.09.12l1 Comment A variety of autoimmune disorders occur in women during childbearing years either before, during, or after pregnancy. 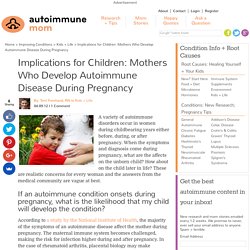 When the symptoms and diagnosis come during pregnancy, what are the affects on the unborn child? How about on the child later in life? These are realistic concerns for every woman and the answers from the medical community are vague at best. If an autoimmune condition onsets during pregnancy, what is the likelihood that my child will develop the condition? According to a study by the National Institute of Health, the majority of the symptoms of an autoimmune disease affect the mother during pregnancy. Symptoms and causes. Symptoms Huntington's disease usually causes movement, cognitive and psychiatric disorders with a wide spectrum of signs and symptoms. 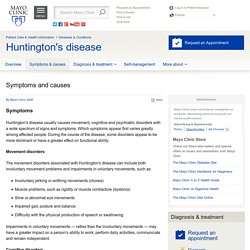 Which symptoms appear first varies greatly among affected people. During the course of the disease, some disorders appear to be more dominant or have a greater effect on functional ability. Movement disorders The movement disorders associated with Huntington's disease can include both involuntary movement problems and impairments in voluntary movements, such as: : white blood cells. Posted on August 6, 2010 by Deana Ferreri, Ph.D. 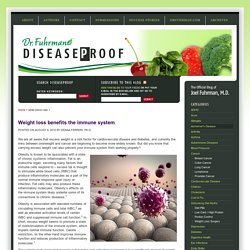 We are all aware that excess weight is a risk factor for cardiovascular disease and diabetes, and currently the links between overweight and cancer are beginning to become more widely known. But did you know that carrying excess weight can also prevent your immune system from working properly? Obesity is known to be associated with a state of chronic systemic inflammation. Fat is an endocrine organ, secreting many factors that immune cells respond to – excess fat is thought to stimulate white blood cells (WBC) that produce inflammatory molecules as a part of the normal immune response upon injury or infection. Fat cells may also produce these inflammatory molecules. The current study evaluated immune cell number and activation in response to a significant amount of weight loss (average 13.5% of body weight) in type 2 diabetics and prediabetics over a 24-week period.

Wilson disease: MedlinePlus Medical Encyclopedia. The goal of treatment is to reduce the amount of copper in the tissues. 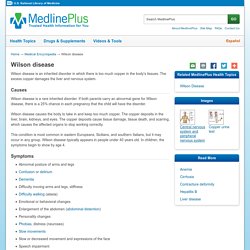 This is done by a procedure called chelation -- certain medications can bind to copper and help remove it through the kidneys or gut.